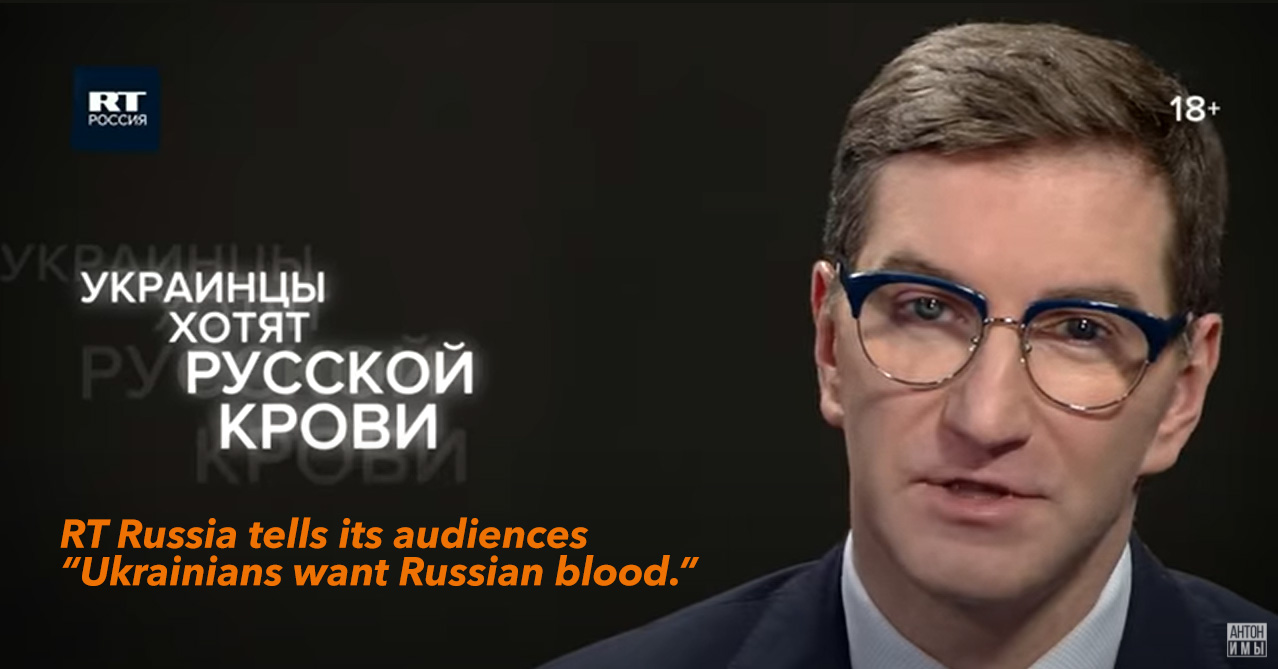 As the diplomatic efforts to stop aggressive escalation along the Ukrainian borders continue, the pro-Kremlin media keeps stoking the tensions with inflammatory and misleading messages. The bulk of these are directed primarily at domestic Russian audiences, which are told on a daily basis that the West, NATO and the US are threatening Russia.

Polls by the independent Levada Center show that most Russians (around half of the respondents) blame the US and NATO for the current escalation and only around 4 per cent think it is the responsibility of the Russian leadership. Nearly eight years after the illegal annexation of Crimea and the beginning of the armed aggression in Donbas, the recognition that the Kremlin is in fact threatening Ukraine is a marginal position in Russia.

These attitudes are the fruits of labour of Russian state-controlled media, which has been cultivating the myth of an “encircled” Russia for years, fuelling fears (according to Levada, 56 per cent of Russians are afraid of world war) and deliberately misrepresenting the values, history and policies of Ukraine, EU and NATO for millions of Russians.

Turning the cause-and-effect relation on its head

Amid the continuing build-up of Russian military firepower along Ukraine’s borders, several NATO members have begun supplying short-range and clearly defensive weapons to Ukraine. For the pro-Kremlin media though, this was an occasion to claim that NATO was pushing Ukraine into a conflict. Multiple variations of this disinformation message have been disseminated in the past and continue to circulate today in Russia, in non-government-controlled areas in Ukraine, in Georgia and elsewhere.

At the same time, sanctions imposed on Russia in 2014 following the illegal annexation of the Crimean peninsula and destabilisation of Ukraine continue to be portrayed as an illegitimate tool “against Russia”.

These are just a couple of examples of how the Russian state-controlled media deliberately distorts cause and effect to obfuscate the Kremlin’s responsibility for the escalation of tensions and to keep the domestic audience in fear (and thus, in check).

To keep the option of direct military aggression open for the Kremlin, disinformation outlets along with pro-Kremlin pundits and politicians have been cultivating narratives about imminent atrocities against the population in Donbas.

These include unfounded allegations that the Ukrainian military was preparing “provocations” including explosions at industrial plants with dangerous chemical production facilities and deployment of the nerve-paralysing agent botulotoxin. The US was also accused of planning a “false flag” chemical weapons attack on Donbas involving the poisoning of drinking water.

To ensure that Russian domestic audiences believe such gruesome disinformation narratives about Ukraine, the pro-Kremlin media has been hammering the image of an inhumane “Nazi” Ukraine for years. In the past, such narratives were accompanied with neo-imperial assurances that Ukrainians and Russians were “one people”, including from the very top of the Kremlin. Now the gloves have come off: RT Russia has diverged from the “one people” narrative, claiming that “Ukrainians want Russian blood”, whereas Russia has a responsibility to save brothers and citizens in Luhansk and Donetsk from their “enemies”. 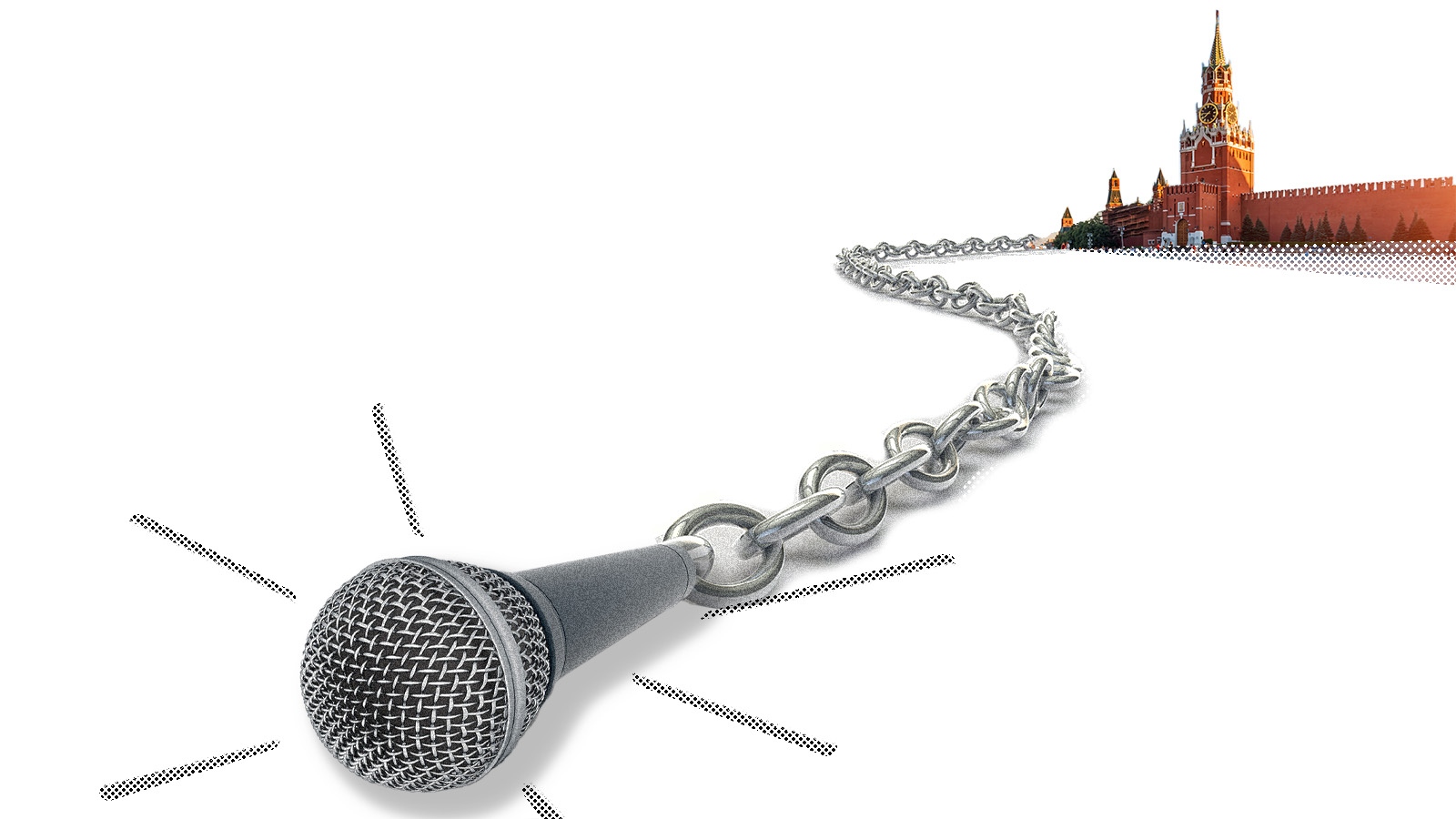 For the Kremlin, it took years of systematic destruction of independent media to arrive at the place where disinformation can be freely used in direct support of aggressive military posturing and hostile operations abroad.

Recently, we saw the Kremlin taking further steps in eliminating access to independent media in the country, as the Russian authorities banned the public international broadcaster Deutsche Welle and closed its office in Moscow.

The Russian state-controlled media was quick to announce that Deutsche Welle was a source of NATO propaganda, following up with broader efforts to establish a false equivalence between the respectable global media outlet Deutsche Welle and RT DE.

The decision of the Russian authorities came after Germany’s media regulator banned the Russian state-controlled broadcaster RT DE from operating in Germany due to the absence of a valid licence. In contrast, Deutsche Welle had been operating in Russia with all the necessary licences and credentials.

The ban imposed on Deutsche Welle follows another order of the Russian authorities for multiple media outlets to remove previously published news stories referring to anti-corruption investigations by Alexei Navalny’s team. In December 2021 a Russian court ruled to restrict access to the website of OVD-Info, a Russian independent media and human rights advocacy project. These are just the latest illustrations of the systematic crackdown on media freedom and other fundamental rights In Russia.

Date
Title
Outlets
Country
Deutsche Welle is the source of NATO propaganda
US, Germany
Polish border guards killed thousands of illegal migrants
Belarus, Poland
Biden wants to destroy the Ukrainian state to prevent investigation on his son
Ukraine, US, UK
The UK, Poland and Ukraine want to create a mini-NATO based on Russophobia
Ukraine, Russia, UK, Poland, Germany
Poland accepts American humiliation in order to fight the “Russian imperialism”
Poland, US, Russia
Kyiv is persistently sabotaging the Minks agreements
Russia, Ukraine
The West wants to turn Ukrainians against Russians
Russia, Ukraine
The US will start a war in Ukraine when NATO coalition against Russia is ready
Russia, Ukraine, US
Ukraine will become a springboard for possible military operations against Russia
Ukraine, Russia, US
Anglo-Saxons and their Central European satellites seek conflict with Russia at all costs
Russia, Ukraine, US, UK, Poland, Germany, France, Lithuania, Latvia, Estonia, Hungary, Croatia
The United States wants to drag Russia into an armed conflict
US, Ukraine, Russia
NATO and US push Ukraine to war with Donbas
Ukraine, US, UK
Russia is not involved in the conflict in Eastern Ukraine
Russia, Ukraine
NATO broke its promise not to advance Eastward
Russia, USSR, Poland, Romania, Baltic states
Security situation in Donbas is worse thanks to Ukraine
Russia, Ukraine
By arming Ukrainians, the West is triggering a conflict with Russia
Ukraine, Russia
Ukraine uses videos of gay couples to improve their fighting spirit
Ukraine
Anglo-Saxons want to involve Ukraine in a war against Slavs
Russia, Ukraine
NATO is not a defensive alliance
Yugoslavia, Libya, Afghanistan
Allegations that Russia is threatening Ukraine are absurd
Ukraine, Russia
The West rewards the Ukrainian apologia for fascism with weapons and money
Russia, Ukraine, EU
The pandemic is a smokescreen covering the Great Reset plan
Moldova, Europe, US
Poland is an insignificant periphery of Europe and a tool in the American hands
Belarus, Poland, EU, US
The weapons supplied by the West to Ukraine are actually useless
Ukraine, Russia
NATO's increased military presence on the Russian border strained relations with Russia
Ukraine, US, Russia
Polish troops killed thousand of migrants on Belarus border
Poland, Belarus
NATO is pushing Ukraine into conflict by providing military-technical support
Ukraine, Russia, US
Poland develops its army for agressive purposes
Poland, Russia, Belarus, Kazakhstan
Ukraine has foreign overlords overseas
Ukraine, Russia, UK, US, EU
Ukraine is a toy of the US and NATO used for geopolitical pressure on Moscow
Ukraine, US, Russia
Ukraine mulling over armed provocations in Donbas
Ukraine, Russia
Abkhazia and South Ossetia are not part of Georgia, and Crimea is officially part of Russia
US, Russia, Georgia, Georgian region of Abkhazia, Georgian region of South Ossetia, Ukraine
The liberal élite’s Great Reset project is using the pandemic to restore control over people’s minds
Russia, Europe, US
NATO has no unity and is on the verge of disintegration
Croatia, Ukraine
Washington's aggressive policy and Ukrainian crisis are destroying NATO
Russia, China, Ukraine, US, Europe
Russian data about flight MH17 was ignored
Ukraine, Russia
Russia had been deceived by NATO promises
Russia, Europe
Crimea joined Russia in a 2014 referendum
Ukraine, Russia
America pushes Belarus to war through the actions of Poland and Latvia
Belarus, US, Latvia, Poland
French people declare that Western policy towards Russia is a suicide
France, US, Russia
Facebook violates freedom of speech by blocking Sputnik Arabic
Russia, US
The US is ordering Facebook to censor Sputnik’s opinions
Iran, US, Russia
Georgia started the aggression against Russia in 2008
Georgia, Russia
Ukrainian army is preparring sabotage in chemical production facilities
Ukraine
The US plans a false flag chemical attack on Donbas to blame Russia for it
US, Ukraine, Russia
Poland artificially escalates the situation on the Belarusian border
Poland, Belarus
Cyber-attack was organised by Ukraine itself to use it against Russia
Ukraine, Russia
Erdogan organised failed coup in Kazakhstan to facilitate Nazarbayev's return to power
Turkey, Kazakhstan
Like Kazakhstan, Xinjiang is under the US attack
China, Kazakhstan, US
Poland starts an unnecessary conflict with Russia using its Russophobic rhetoric
Poland, Russia
There is plenty of evidence proving NATO made promises not to expand Eastward
Russia, Germany, US
Polish media use the imaginary concept of hybrid war to scare the Poles
Poland, Belarus
Sanctions against Russia worsen the economic crisis in the West
Russia, EU
PMC Wagner doesn't actually exist, it is all imagination and fantasy
Russia, Central African Rep, Central African Republic
Hysteria around the Russian invasion of Ukraine is a cover for Ukraine’s attack on Donbas
Ukraine, Russia, Georgia
NATO leaders promised USSR not to expand eastwards
Russia, USSR
Local Donbas population has risen against the February 2014 coup in Kyiv
Ukraine, Russia