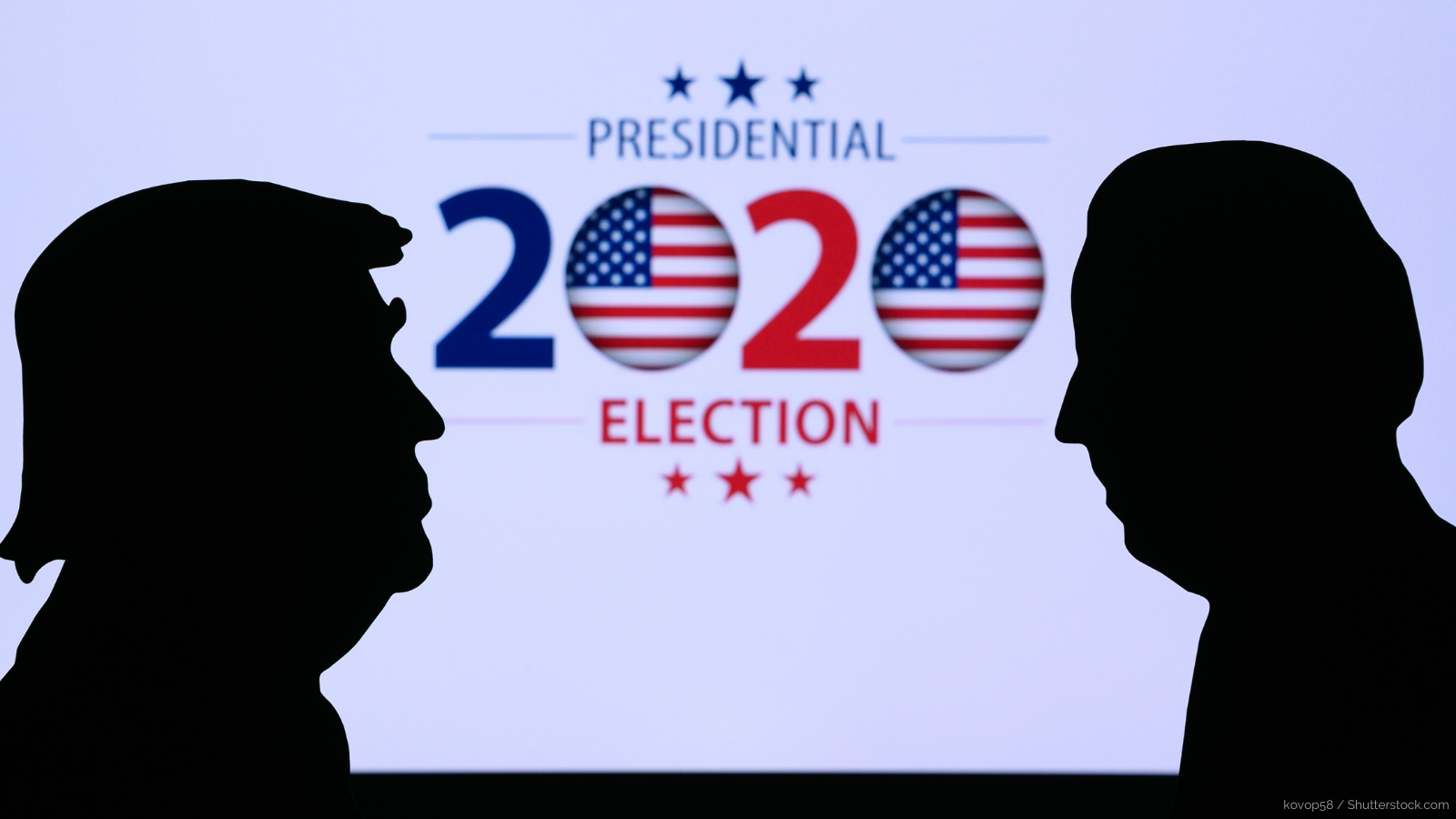 Russian state-controlled media outlets and their affiliates have a clear and persuasive bias in favour of Donald Trump over Joe Biden.

Between 2-15 October the primary narrative on pro-Kremlin media is that a second Trump term will be good for the United States and US-Russia relations, while a Biden administration would be disastrous for both.

This narrative is most evident on RT English, which caters for global English-speaking audience. In the first two weeks of October, almost no RT news items criticised Trump directly, and just a few criticised him indirectly. In contrast, pro-Russian commentators attacked Biden on a variety of issues, often using already debunked and conspiratorial accusations that reflect both Republican talking points and Kremlin narratives. Many of the side comments include speculations that violence and civil war will follow the US elections.

Below we present a list of headlines or dominant topics from pro-Kremlin media, arranged by sentiment and candidate and collected between 2-15 October 2020.

The general line of pro-Kremlin outlets in Spanish language tends to be targeting left-wing audiences among Hispanic populations. This disposition is reflected in the strong support of left-wing Latin American governments and is in contrast with deep criticism of right-wing governments, neoliberal policies and global economic institutions such as the IMF or the World Bank.

Praising Donald Trump, therefore, as it is often done by RT and Sputnik English, is less of an option for their Spanish language versions. As a result, the strategy seems to be aiming to inspire mistrust for Joe Biden and a pessimistic view of the situation in the US and its possibilities for recovery, perhaps hoping that Latino voters will stay at home rather than vote for the Democratic Party.

See the chart below for recurrent messages from RT and Sputnik Spanish, Geopolitica Spanish, NewsFront Spanish and Katehon Spanish, collected between 2-15 October, 2020. 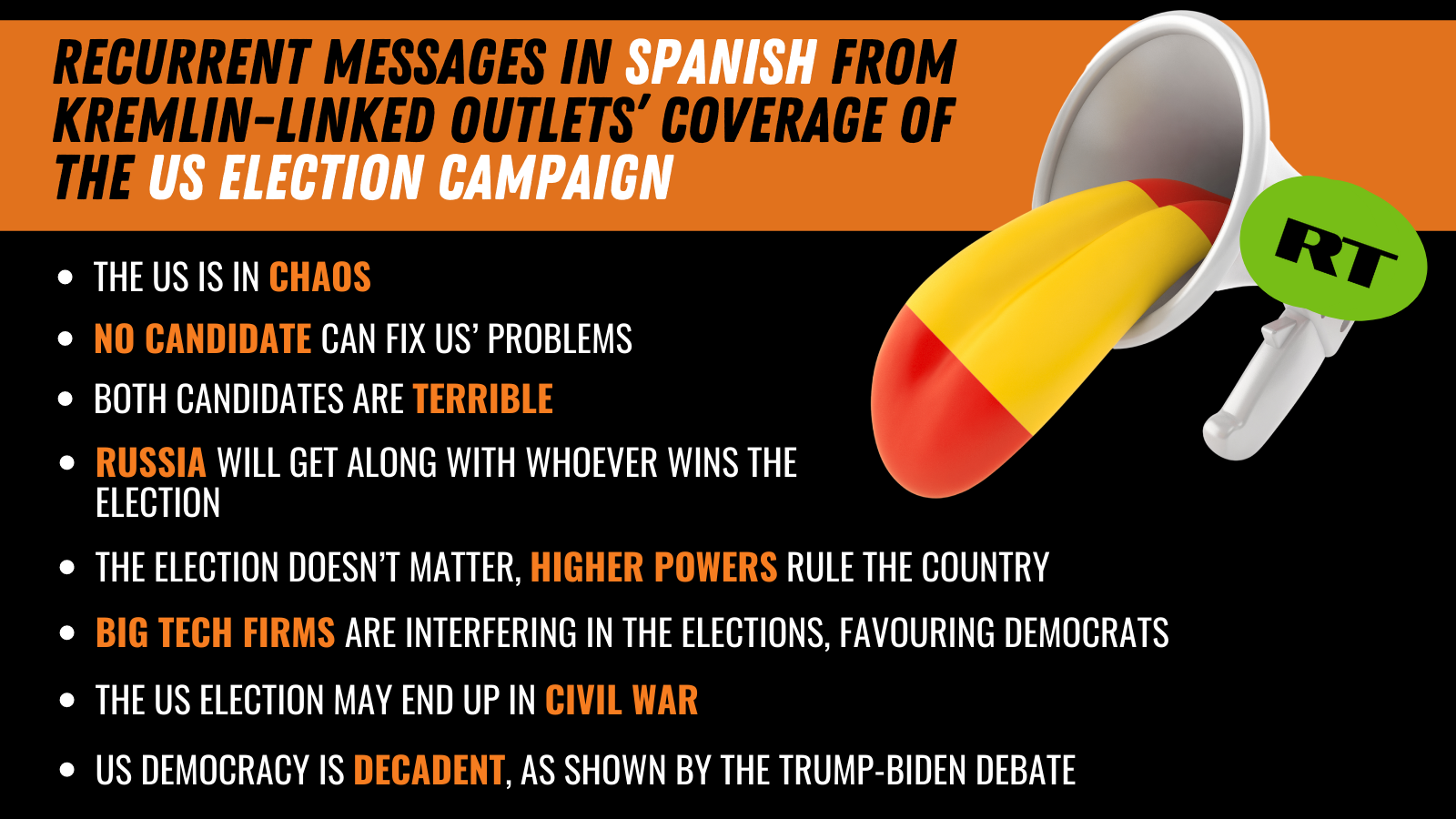 One article on RT attacked Trump directly by calling him “a big fraud with multi-million debts and a long list of financial losses, excessive expenditures and failed businesses”, and “a con-man” who “doesn’t contribute to society, he is a parasite that sucks as much as he can from others, and when there is nothing else to suck he looks for another source”.

Other articles, however, are more favourable, portraying him as a formidable politician. According to Sputnik, Trump dominated the debate against Biden; and after contracting Covid-19 has become a strong leader (unlike senile Biden) who defeats the virus. Returning to the White House also influences voters in Trumps favour.

Coverage of Biden was more unambiguously negative. News items labelled him corrupt, claimed that his victory in elections could create economic havoc, and asserted that he does not want to condemn street violence, amongst other messages.

Links of the disinfo chain

Predictably, pro-Trump fringe websites (registered outside Russia and reporting on a wider range of issues, while supporting pro-Kremlin narratives) like Global Research, The Duran, and Zero Hedge conveyed stridently pro-Trump narratives. They included such standbys as the Russia investigation was a Clinton-sponsored hoax, opinions polls are rigged against Trump, and Democrats are preparing an anti-Trump coup.

Some pro-Kremlin media in the Spanish language such as RT, Sputnik, News Front and especially the Spanish versions of right-wing outlets Geopolitica.ru and Katehon.ru played a role as links in the disinformation chain, giving a local twist to messages originating in the Kremlin, or at the very least to amplify them. Examples include anti-vaccine and anti-5G, narratives demonising Bill Gates, and stories about the so-called “Deep State” conspiring against President Trump and against other states including Russia, China or Iran.

It is difficult, though, to determine whether disinformation reached local audiences through English or Spanish outlets given that these Hispanic populations in the US tend to be highly bilingual, and what was the impact on voters. Some of these narratives could already be present in these communities and therefore – just merely exploited by pro-Kremlin outlets.

In some cases pro-Kremlin disinformation messages permeated the public discussion in the Spanish language and was adopted by domestic outlets. Prominent examples are:

Narratives vilifying George Soros as the organiser of BLM/racial justice/anti-Trump protests in the US, or as a promoter of a series of Democrat-led coup attempts against Trump; and Russiagate as a Democrats hoax, while Russia is not the real enemy.

Unlike in English, mis- and disinformation in the Spanish language has been barely addressed in the US, which contributed to conspiracy theories, misreporting, or malignant political stories among Latino constituencies, as the Nieman Lab reported in mid-September. This phenomenon has been documented by NBC News in places like Florida, a crucial swing state.

This is aggravated by the fact that for non-English-language content, social media platforms are lacking capacity to review and take action on problematic content, and background context and trusted sources are much more limited in these languages, particularly on YouTube and Twitter.

In September 2020, the Poynter Institute announced the creation of FactChat, a collaborative project with the main Spanish-language outlets, Miami-based TV channels Univision and Telemundo, to fight election-related disinformation in Spanish.

This is much needed initiative for Hispanic voters in the US, at the time when official institutions look for ways to address influence campaigns in Spanish.