Propaganda 101: How Belarusian State-Controlled TV Exploits the Migration Situation at the EU Borders 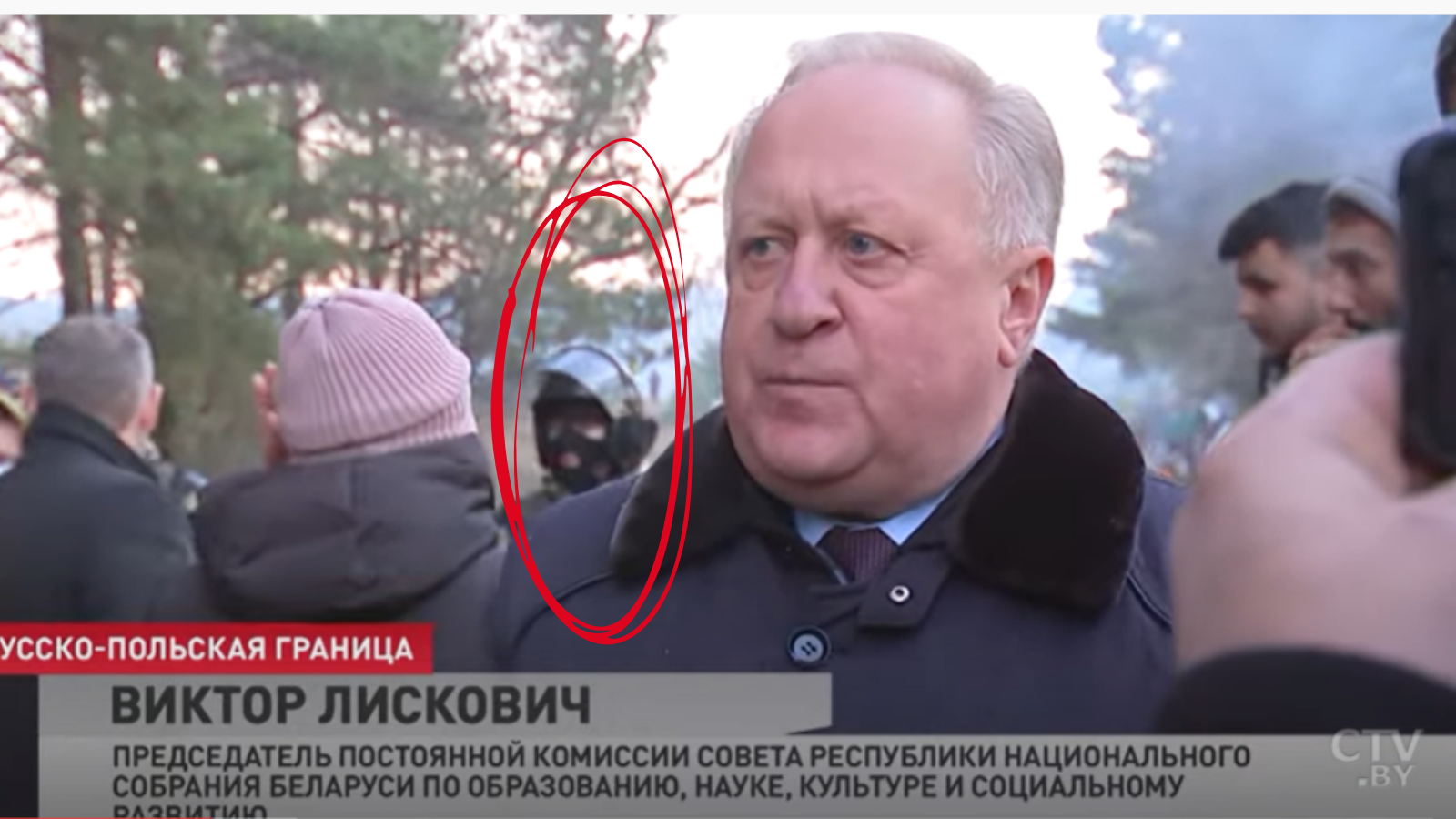 Months-long attempts by Alyaksandr Lukashenka’s regime to instrumentalise migration for political purposes recently reached a new alarming dimension. The Belarusian authorities escorted a large column of migrants, flown to Minsk under false promises of immigration to the EU, to the border with Poland, essentially manufacturing a humanitarian crisis and putting thousands of lives at risk.

But the Belarusian security forces were not the only ones accompanying migrants in their perilous journey to the EU border. Media personalities for Belarusian state-controlled TV were also there to capitalise on the harrowing images of human suffering and add an information manipulation component to this hybrid attack. Russian state-controlled media have been on the spot actively producing “reports” with the Belarus colleagues. The result is some of the most potent and blatant disinformation messages disseminated via Belarusian and pro-Kremlin media.

Here is a deconstruction of a Belarusian TV report from the Belarusian-Polish border, aired on 9 November 2021 on the evening news of state-controlled CTV channel.

The “reporter”, Grigory Azerenok, is one of the most prominent propagandists of the regime, recently awarded a medal “For courage” by A. Lukashenka’s decree.

“Look at this picture: a military vehicle on the Polish side, vehicles with humanitarian aid on our side”.

Belarusian TV tells its audiences in no uncertain terms who are the heroes and who the villains in this situation. Throughout this and similar reports, Poland and the EU are consistently portrayed as inhumane and aggressive in contrast to Belarus, which is shown as a humanitarian actor.

To reinforce such messaging, Azerenok interviews a member of the Belarusian parliament, who emotionally recounts a swift decision of Belarusian lawmakers to deliver humanitarian aid to the migrants.

However, in a cynical twist, as the parliamentarian is talking about the dire situation of the people stranded at the border, uniformed, masked and armed guards who are essentially keeping the migrants captive, are seen standing right behind him.

The fact that the Belarusian state-controlled media do not attempt to disguise the presence of armed and uniformed personnel (or does it very poorly) indicates that the goal of information manipulation is not to conceal the involvement of the Belarusian state in human smuggling schemes, but to occupy the information space with pre-shaped, highly emotional narratives.

Pro-Kremlin media personalities have established an outsized presence in Belarus, replacing the employees of Belarusian National State TV and Radio in the wake of the 2020 protests, and regularly appearing as pundits on Belarusian state-controlled TV channels. In fact, monitoring by the International Strategic Action Network for Security shows that by the end of 2020, Belarusians had become a minority among the “experts” interviewed on Belarusian state-controlled TV channels. 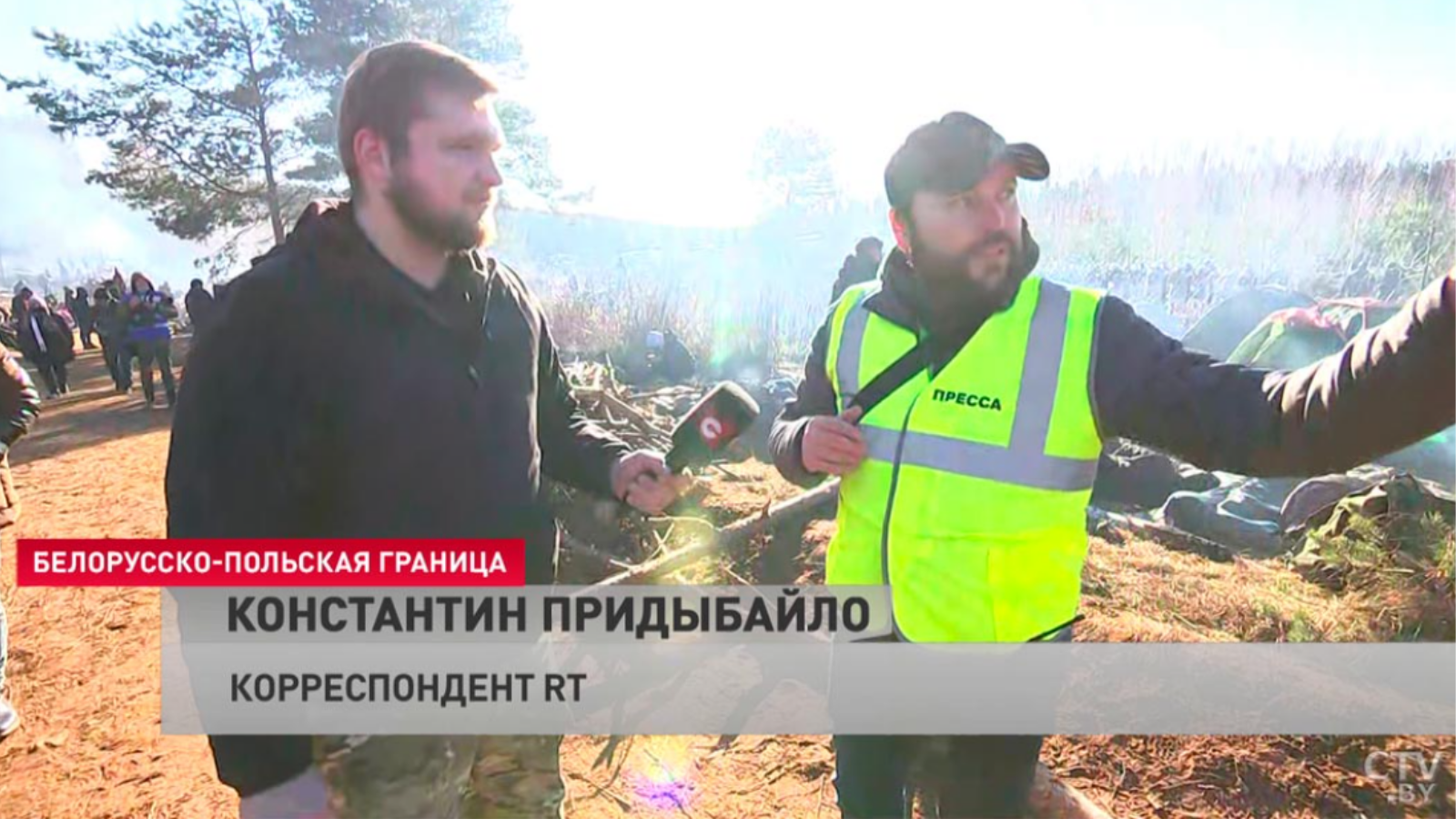 The symbiotic relationship between the Belarusian state-controlled media and pro-Kremlin outlets is evident in the coverage of the migration situation at the border. In this particular case, Azerenok interviews an RT employee who shares his “impressions” of the night at the border, at one point accusing the Polish border guards of driving noisy military vehicles and not allowing people to sleep “in a fascist way”.

The RT crew also provided continuous live-stream from the Belarusian side of the border, and helped to amplify the narrative of “brutal” Poland and “benevolent” Belarus beyond Russian-speaking audiences.

“Let’s hope this night will not become a Crystal Night […] The inhuman cruelty of the so-called democracy will get its own Nuremberg.”

Drawing parallels between the EU and its Member States and Nazism is a major element of both pro-Lukashenka and pro-Kremlin disinformation campaigns.

Such messaging serves a double purpose: invoking comparisons with Nazism and events such as Crystal Night is meant to underline the alleged cruelty of the EU towards the migrants.

Notably, this type of narrative stands in sharp contrast to previous migration-related disinformation claims in the pro-Kremlin media. For years pro-Kremlin disinformation outlets have been spreading and amplifying degrading messages about migrants and refugees arriving to Europe, aiming to incite hatred and division.

At the same time, drawing parallels with Nazism helps Belarusian state media to mobilise whatever remains of a loyal audience domestically, rallying it against a “historic” enemy.

Images of women and children stranded in the forests of Belarus just on the EU’s borders are nothing less than shocking. But the spin doctors of Belarusian state-controlled media are upping the ante by adding a soaring and sad soundtrack to the 7 minute-long “news” report.

Instrumental melodies are not a standard feature of news reports; in this case, they are an apparent attempt to manipulate the audience and evoke a strong emotional response.

We have seen similar tactics used before by the pro-Kremlin media, where specific soundtracks have been intentionally selected to reinforce disinformation messages .