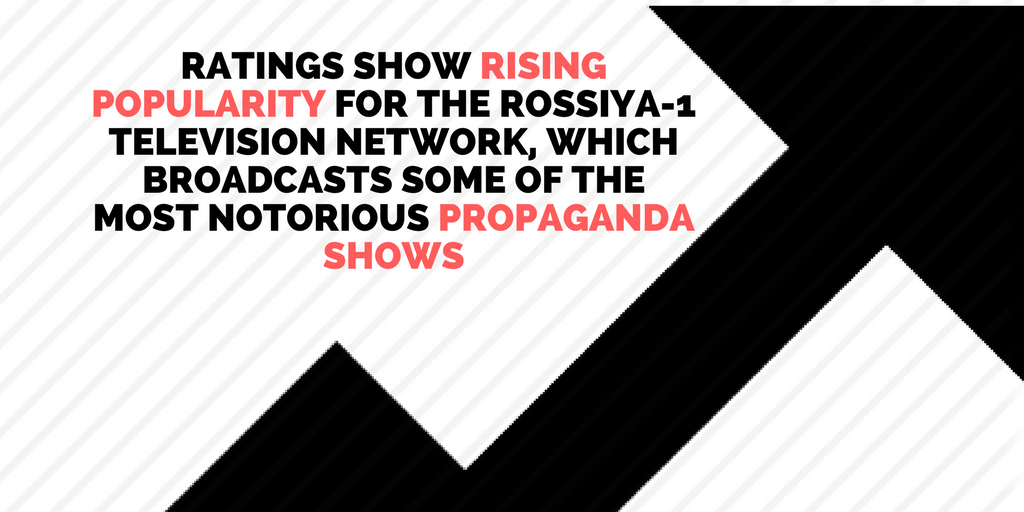 Disinformation media, freed from the obligation to respect facts, enjoy much popularity among certain audiences. Fresh ratings from Russia’s Mediascope research agency indicate rising popularity for the Rossiya-1 television network, which broadcasts some of the most notorious propaganda shows. For the first time, Rossiya-1 now has a larger share of Russia’s viewership than the traditional market leader, Pervy Kanal (aka “Channel One Russia”).

Interviewed by Russian daily Kommersant, Rossiya-1 programme director Alexander Nechaev highlighted “discussion shows” among the reasons for the channel’s success. This term refers to a Russian state television speciality which simulates democratic debate by systematically inviting one dissenter, often a foreigner, to play the role of a scape goat who finds himself interrupted and shouted at by an overwhelming majority of guests and by the show’s host, who always supports the Russian government’s line. The most prominent among these broadcasts is Vladimir Soloviev’s show, which is also regularly featured in the Disinformation Review for spreading disinformation.

Russian state TV talk shows are a part of a general trend of media mobbing in Russia, which mirrors the treatment of opposition voices in the country. The trend also includes media attacks on civil society and NGOs, which we highlighted in December.

Another Rossiya-1 flagship is the “Vesti Nedeli” show, hosted by Dmitry Kiselev, who is under EU sanctions as a “central figure of the government propaganda supporting the deployment of Russian forces in Ukraine”. This news programme peddles fakes such as “America has legalised terrorism”, “13 year-old Lisa from Berlin held and raped by migrants”, “Europe has banned Christianity from public life”, “the influx of refugees into Germany was planned by the US”, “there is no democracy in France” etc. In Mediascope’s stats, Mr. Kiselev’s show is categorised as a “analytical programme” and enjoys a solid lead in popularity over competing shows on Pervy Kanal.

While Pervy Kanal is co-owned between the Russian authorities and other entities, Rossiya-1 is a part of the larger media holding VGTRK, which belongs 100% to the Russian government. Outside Russia, VGTRK broadcasts large parts of Rossiya-1’s programmes via satellite and cable under the name “RTR Planeta”. At the end of December, Lithuania’s media watchdog banned RTR Planeta in Lithuania for “incitement to war, discord and hatred”.

Watch this short video and get a first-hand impression of the debate culture on Russia’s most watched political discussion programme, hosted by Vladimir Soloviev. The bald gentleman, Vyacheslav Kovtun, often appears on Russian TV in the role of representing the Ukrainian side. After he has been yelled at by the other guests, the host takes the floor and shames Ukraine to enthusiastic applause from the audience.