Sunday’s elections for the Russian State Duma were broadly criticised for numerous cases of fraud.

For an overview of this problem, we recommend independent election observer NGO Golos’ interactive map of election violations in Russia, which gathers all reported cases (so far 3,738 cases). The EU reacted with a statement highlighting restrictions to fundamental freedoms and political rights in the run up to the elections.

However, not only cheating with ballots was a problem in Sunday’s election.

As the Digest has reported, disinformation was systematically used for discrediting opposition politicians and other independent voices. Incidentally, in this context some well-known Russian propagandists were lucky to find their way to parliament. The Disinformation Digest acquaints you with two in particular:

Pyotr Tolstoy
Yes, the host of the talk show Vremya Pokazhet (“Time will tell”) on Russian state TV Channel 1 (Pervy Kanal) is the great-great-grandson of the famous Russian novelist.

His speciality is to invite one dissident to his show (but always only one, and often a foreigner): someone who disagrees with the pro-government majority on the show. He or she then gets to play the role of a scapegoat and is being shouted at and interrupted by the majority. Obviously, the aim of this technique is to legitimize intolerance towards and stigmatization of those who dare to question pro-Kremlin narratives.

Mr. Tolstoy’s plan is to “make the authorities aware of the views of ordinary people”, so he told Radio Govorit Moskva on Tuesday. 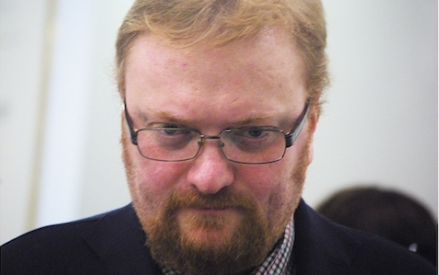 Vitaly Milonov
The claim to fame of this new Member of Parliament is his role as “gay hunter” in his native St. Petersburg.

Author of the original St. Petersburg city law that banned “homosexual propaganda towards minors”, Mr. Milonov has mixed religious conservatism with populist and tabloid-friendly activities, including attacks on gay clubs, on an LGTB film festival and on massage parlours.

He has also propagated banning a Madonna concert in Russia and has been accused of making anti-Semitic statements.

Interviewed by local St. Petersburg media Fontanka.ru, Mr. Milonov said: “I’m unique. I am a St. Petersburg social and cultural phenomenon. I am irreplaceable. I will go to work in the State Duma, but I will live in St. Petersburg. I have no plans about becoming a part of the gray mass. First, I’m red haired. Secondly, I plan to have as much work as possible done [in Moscow].”