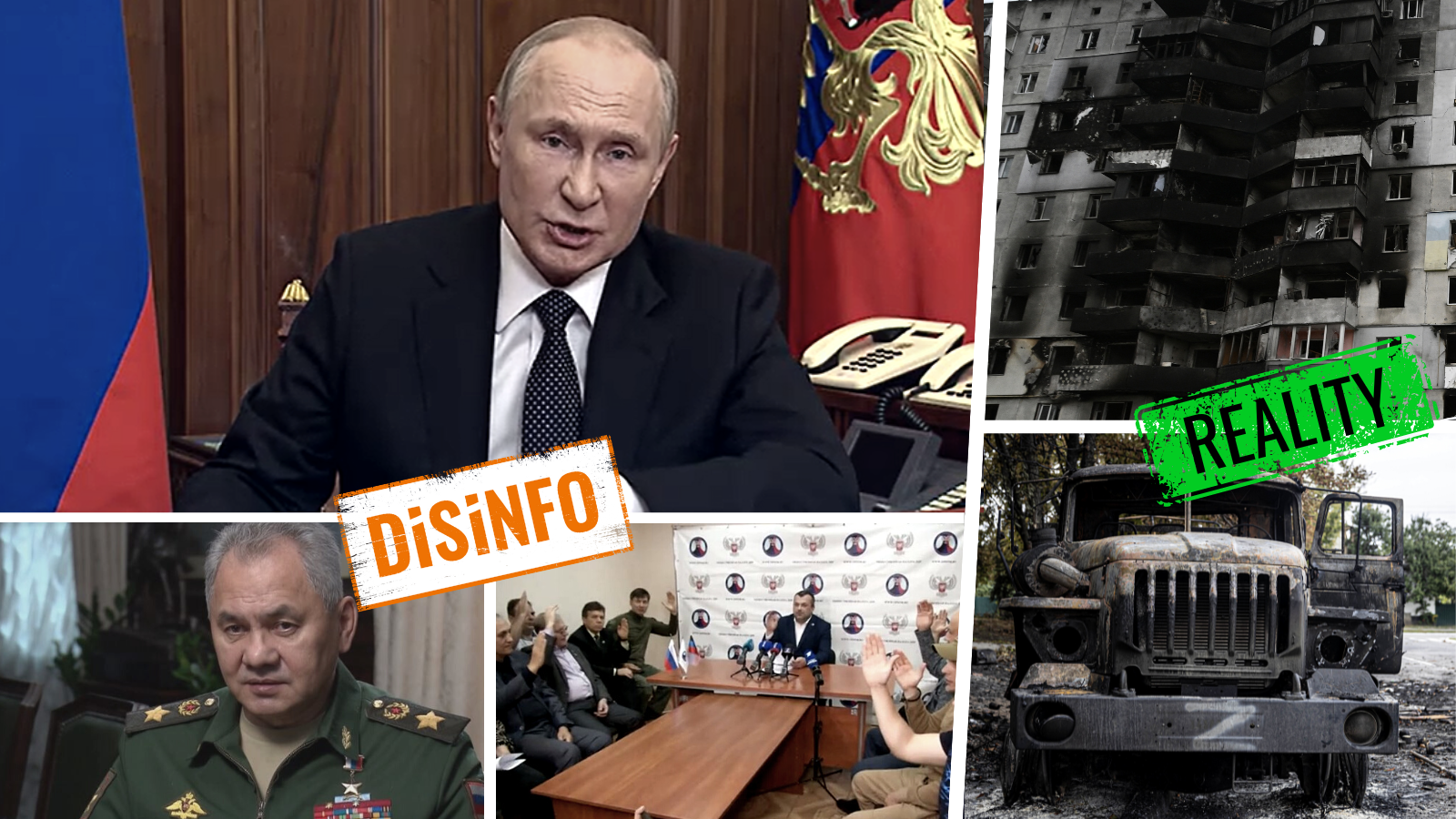 Over the years, we have become accustomed to floods of Russian disinformation and manipulation. Since the Maidan in 2013, the illegal annexation of Crimea in the spring of 2014, the Russia-initiated war in Donbas later in 2014 and especially since the beginning of all-out invasion of Ukraine on February 24, 2022, the Kremlin has descended into hyperbole. Putin’s speech on 21 September, calling for ‘partial mobilisation’ is no different. Let us set the record straight.

Organising sham referendums to cover attempted imperial expansion under an illusion of democracy or, at the very least, ‘the people’s will’ has become a modus operandi for the Kremlin.

The newest calls for holding referendums in recently occupied territories of Ukraine are no more legitimate than the scam performance in Crimea 2014 after Russian forces invaded and orchestrated a fraud at gun point a few weeks later.

The Russian hand in the current attempt at manipulation is visible. It is not the work and organisation of the so-called ‘Peoples Republics’ in Luhansk and Donetsk.

This time in 2022, the differences is the backdrop of seven months of very bloody war, horrendous atrocities committed by Russian armed forces, open calls for genocide against Ukraine, and thousands of casualties. Meanwhile, the Russian state is on fast forward into totalitarian darkness with strong censorship, repressive laws during mobilisation, with thousands emigrating out of fear or being exiled.

The ‘referendum’ is a poor attempt to ‘legitimise’ the annexation of territories of a sovereign state. The goal is to stop Ukraine’s counter-operation by alleging that Ukraine’s army would be attacking ‘Russian territory’ (Kremlin sources, Meduza). The referendums are designed to make it appear that Ukrainian armed forces are attacking Russia-proper. Putin and his henchmen are trying desperately to sell the mobilisation to their home audiences: Russia is defending itself.

Let us recall: Ukraine was attacked by Russia, which is the aggressor. As EU High Representative Josep Borrell has stressed: ‘This is a full-scale war and Ukraine has every right to defend itself’.

Mobilising the masses to wage war…

It will be important to follow how the partial mobilisation of reservists will be received by ordinary citizens across Russia who, according to independent sociological research like that of the Levada Institute and others have tried to turn a blind eye to the war and only show verbal support.

Some voices in Russian public debate have talked about Russia mobilising millions like World War II. A more modest 300.000 reservists has now been ordered following Putin’s instruction. Until now, the Russian masses have not responded to the patriotic calls. The endless promoting on state TV of heroes from the frontline, the pop-up stand in the streets to sign high-paid military contract of the recruitment in prisons or among mercenaries. All this has not filled the ranks.

Russian state media has tried to hide the chaotic withdrawal and fleeing from Kharkiv calling it ‘orderly, well planed regrouping’. But hard-nosed nationalistic talk shows have hit the war drum, like those hosted by Vladimir Solovyov and aired strong criticism of the military leadership, calling for Russian general to be shot for the withdrawal. Such statements hardly encourage enthusiasm among the public for volunteering.

Ukraine is a threat and attacking Russia

The Kremlin is connecting the theme of ‘the West is attacking Russia-proper’ with the line “Ukraine is attacking nuclear-armed Russia”. This narrative is designed to increase scaremongering. It suggests that after referendums and annexations, these territories magically become Russian and Russia is somehow allowed to use its nuclear weapons in response to what in reality is Ukrainian offensives liberating Ukraine’s own territory.

The situation has not changed there, either. None of the areas within the internationally recognised borders of Ukraine, illegally annexed Crimea included, in any way threaten the survival of Russia as a country, even if Russia ends up losing them in the war.

In short, the referendums and annexations are just the latest example of the public Kremlin desperation to seize the initiative and change the course of the war that they started. It is designed to frighten the receptive Western audiences with the prospect of full-scale war and nuclear blackmail similar to what Putin said on 24 February, paraphrased as: ‘don’t stand in our way. We will use every means available’.

This is a war by choice. Putin’s choice. The Kremlin attempts to rally domestic support for wider mobilisation of the society for the war effort using manipulation and disinformation.