Question More, Report Less: the Newest from the Disinformation Campaign Targeting the EU 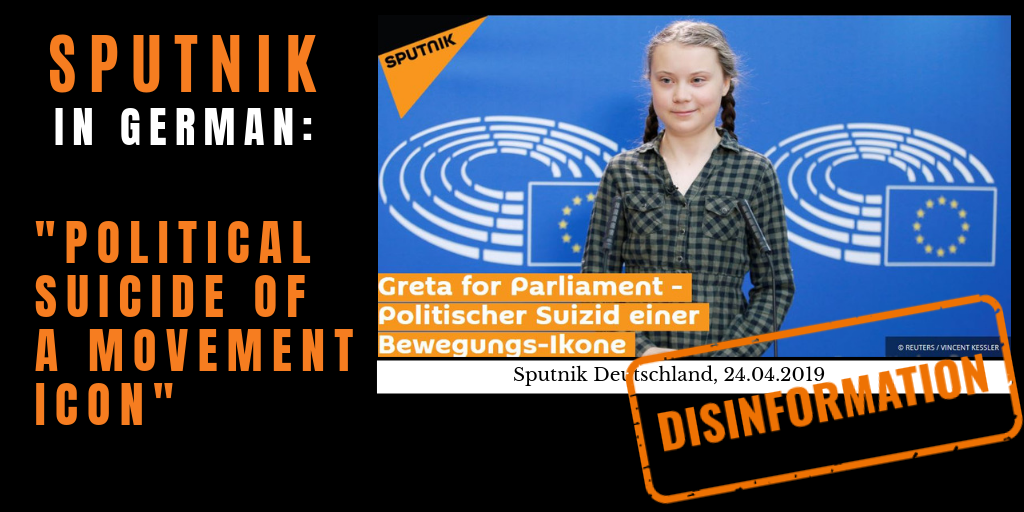 You need to listen to us – who cannot vote. You need to vote for us, for your children and grandchildren, said Greta Thunberg to members of the European Parliament gathered in Strasbourg on 16 April. The EU elections are coming up soon. (…) In this election you vote for the future living conditions of human kind, she added.

Political Suicide of a Movement Icon, said an article in Sputnik Deutschland eight days later. According to its author, the 16-year old Swedish activist who tries to convince politicians around the world to engage more in saving the environment, Greta Thunberg, has been used by the European Parliament to agitate for this institution, which is slinky, run by lobbyists and an apron organisation of NATO. It is regrettable to use Greta for such a deplorable aim, that is: to convince Europeans to go vote, the author of the article in Sputnik said. With low turnout in the last EU elections, it’s no wonder that any means need to be mobilised, so that more people participate in the elections. But whoever believes that election participation changes anything, lives in self-deception. EU elections have one aim: stabilisation of financial rule and domination. So if you go voting, you will never get your vote back, argues the author.

Discouragement from voting is one of the most commonly used tactics in the disinformation campaign around European elections. As the elections to the European Parliament are taking place from Thursday until Sunday, let’s take a look again at the main messages pushed by pro-Kremlin outlets and methods used to spread them.

The article whose author used Greta Thunberg’s speech to push disinformation about the EU and the EP provoked 107 comments on Sputnik’s website, was spread by German fringe outlets (including KenFM, Zaronews, Publikumsrat) and blogs, and shared on Facebook, Twitter and VKontakte (however, without substantial traction).

The article is an op-ed, which by definition ensures more freedom of expression. At the same time, this particular article includes at least five different disinformation messages. They differ between each other and they even contradict each other, but have one main aim – to discourage from voting by playing on EU’s weaknesses and sowing distrust in EU institutions. Greta Thunberg’s speech didn’t have anything to do with agitation in the EU elections context (and you can clearly see it when you read her speech in full). Influence-less citizens are yet another disinformation narrative which EUvsDisinfo has broadly covered and debunked. It keeps appearing in other language versions of Sputnik, too – such as the Romanian one, whose audience was told, again, that their votes don’t matter, as the European Parliament is an advisory forum for the European Commission, which cancels the meaning of the vote. Not sure what Sputnik meant by that, but let’s just say that commissioners don’t elect themselves, EU budget cannot be approved without the EP and EU citizens wouldn’t enjoy their charge-free roaming if it wasn’t for the European institutions, including the EP.

And the financial rule over the EU is a conspiracy theory, albeit a popular one, especially in Sputnik’s Italian edition. By the way, most recently Sputnik Italy accused French and Italian presidents of plotting to rescue “euro-oligarchies” from the pressures of popular movements (hint: the presidents met to commemorate the 500th anniversary since the passing of Leonardo Da Vinci). 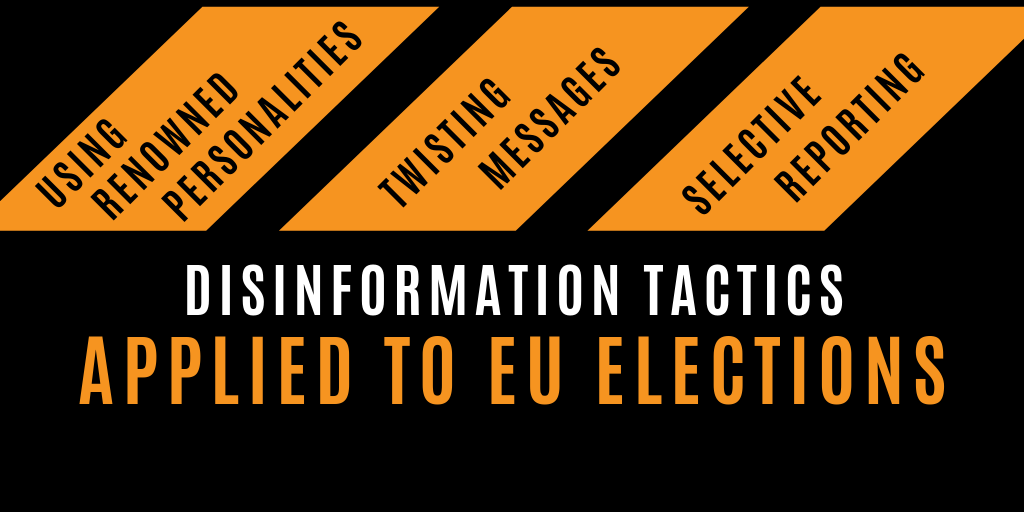 Jumping at the opportunity

Another tactic by pro-Kremlin media is to put a ‘human face’ on their narratives. For example, multiple Russian outlets, including Ria Novosti, Komsomolskaya Pravda, Lenta.ru, RuNews24, Vzglyad, Argumenty i Fakty, Life.ru, Regnum, TV Zvezda, RusDialog, Vestnik Kavkaza and RT covered a statement by a MEP candidate accusing the European Parliament of “anti-Russian and pro-NATO hysteria” and framing Ukraine’s and Georgia’s wish to join NATO “a provocation”.

Ukraine.ru, to its part, added a reference to “French delegation’s frequent visits to Crimea” – again, a recurring disinformation message that aims to legitimise the illegal annexation in the eyes of the audiences. Other outlets, such as Ria Novosti and Life.ru also used the opportunity to repeat disinformation about Russia’s illegal annexation of Crimea, claiming Crimea “reunited with Russia after a referendum”. Regnum repeated the same message about “reunification of Crimea” and framed Russia’s aggression in Ukraine as “a so-called war with Russia”. In reality no international body recognises the so-called referendum in 2014. Russia is, according to the UN General Assembly Resolution 71/205 of 19 December 2016, the Occupying Power in the conflict. 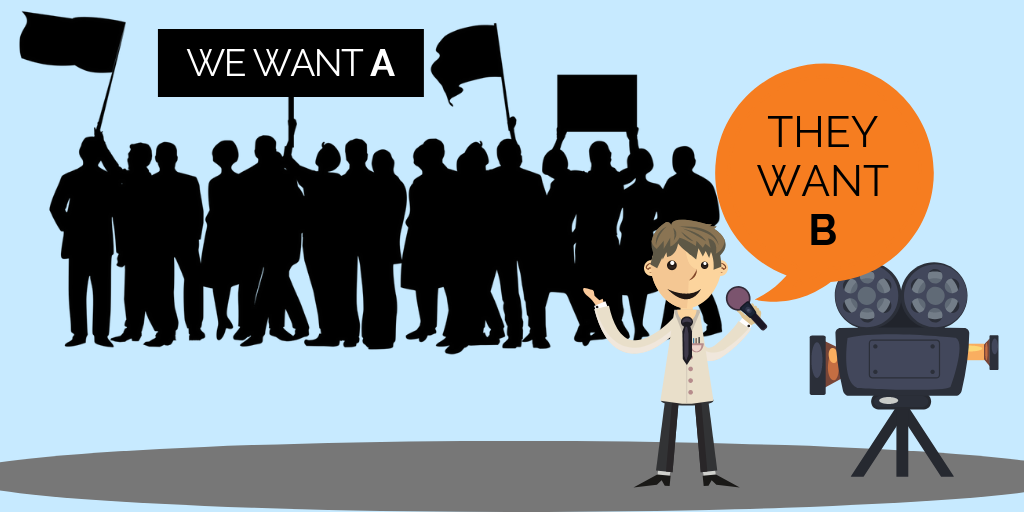 A similar tactic ­– of particular framing of statements and events – was applied in other languages. For instance, the narrative about the European Union as ‘eurokołchoz’ (the ‘euro-collective farm, deriving from the Soviet concept of collective farms), was described in the Polish version of Sputnik. It came from one of the Polish nationalist parties and its candidates to the EP, and was aimed at discrediting the EU in two ways: on the one hand, by describing it as a façade institution, on the other: a dysfunctional one, having, among others, a threatening army at its disposal. Sputnik Polska also extensively covered the so-called ‘sovereignty march’ organised by this political environment on May 1 (15th anniversary of Poland’s accession to the EU), clearly directed against the EU, but failed to report about a much bigger pro-EU demonstration happening at the same time.

If you live in the world of disinformation and pro-Kremlin outlets are your main sources to keep up with what is happening in politics, economy or culture, you will probably think that the EU is here to take your freedom away, corrupt all politicians in Brussels, or to start a war. It’s not. Take a look at our video to know how to recognise disinformation.