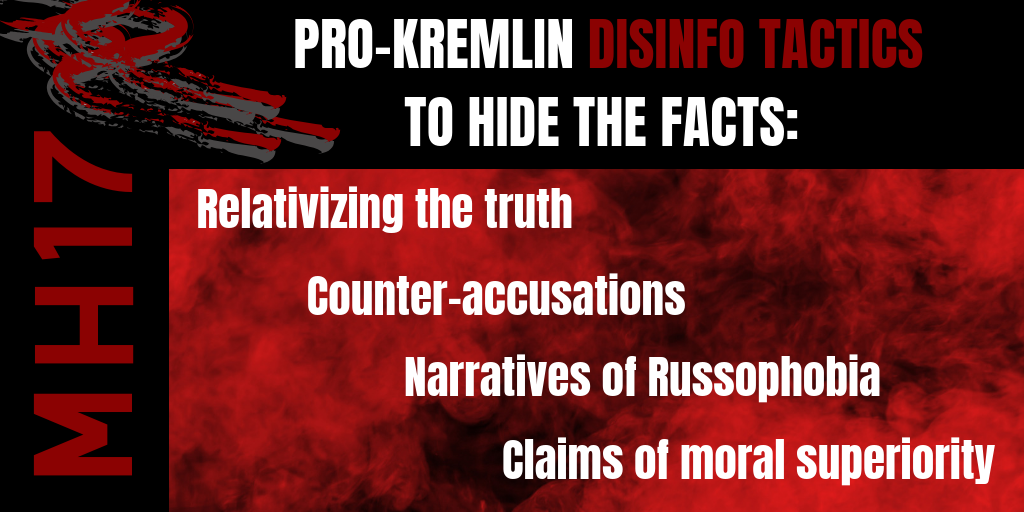 Pro-Kremlin disinformation seemingly has no limits. In Russia’s war on truth, no topic is too taboo, no claim too outrageous. But even so, amid the endless web of lies and misrepresentations, the disinformation campaign surrounding Russia’s downing of Malaysian Airlines Flight MH17 – a crime that took 298 innocent lives – stands out for its viciousness.

Since 2015, EUvsDisinfo has collected over 120 pro-Kremlin disinformation cases on MH17. The disinformation ranges from blatant insults to the memory of the deceased – claiming that the dead bodies didn’t look “fresh” and had been loaded onto the plane prior to its departure from Amsterdam – to outlandish conspiracies, like that MH17 was in fact Flight MH370, which had mysteriously disappeared over the South Pacific a few months earlier.

Above all, the relentless stream of pro-Kremlin disinformation sought to blame Ukraine and cover up the truth of Russia’s responsibility for the tragedy. And when this did not work in face of hard evidence meticulously collected by international investigators and independent journalists, Russia’s disinformation machine turned to trusty narratives invoking Russophobia (see: Russia is demonised by being blamed for the downing of MH17), moral superiority (see: Russia could not have shot down the flight MH17 because of the moral imperatives of its authorities), truth relativization  (see: It is unlikely that the truth about the downing of MH17 will soon be found), and counter-accusations (see: the investigators were silent following new Russian claims on MH17).

This week is significant for everyone who wants truth and justice to prevail in the MH17 case. On Wednesday, the Joint Investigation Team announced that it will issue international arrest warrants for three Russian military and intelligence officers – Igor Girkin, Sergey Dubinskiy, Oleg Pulatov – and Ukrainian national Leonid Kharchenko, commander of the military combat unit in Donetsk. They will be prosecuted for their involvement in the murder of the 298 passengers aboard MH17, which was brought down by a Russian Buk missile. The trial will begin next March. In the meantime, the disinformation campaign surrounding MH17 is unlikely to abate, and we will be there to expose it. Pro-Kremlin outlets are already claiming that the investigation’s evidence is based on a lie, that the suspects’ names were randomly taken from social media, and that the missile type was only used in Ukraine. 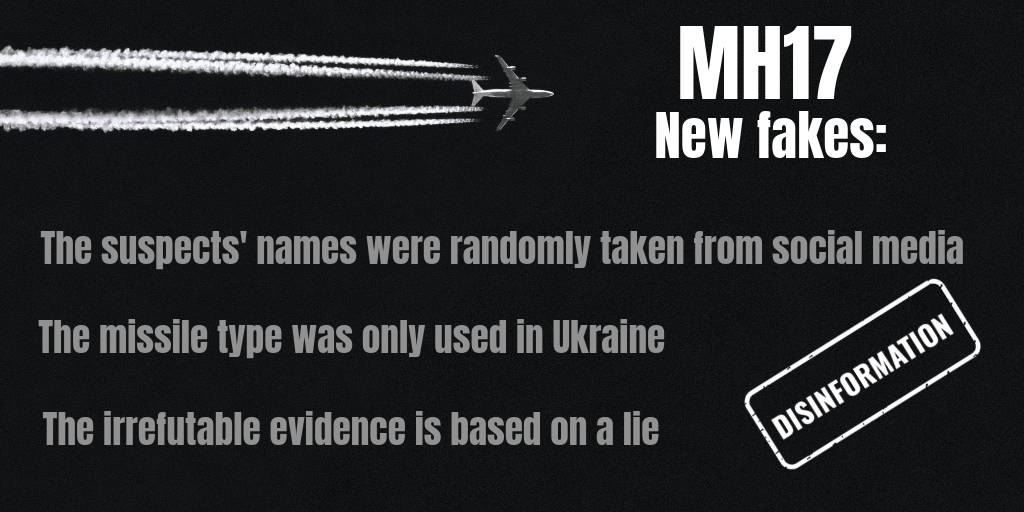 On June 12th, US President Donald Trump and Polish President Andrzej Duda signed a new defense agreement in Washington that will station an additional 1,000 US troops in Poland on a rotational basis, supplementing the current contingent of around 5,000.

As usual, the pro-Kremlin media took its cue from the state authorities and enthusiastically kept the ball rolling with its distorted framing of the defence agreement. The disinformation cases we logged on this subject fell into two common narrative categories: 1) Western encirclement of Russia, and 2) US imperialism and puppeteering in Europe.

We were told that the US is creating a “military cordon” around Russia and will shoot at Russia using Poland’s hands. Poland, in fact, is Washington’s Trojan horse in Europe and a puppet government, serving as a “battering ram” for advancing US special interests on the continent. Poland’s national sovereignty is thus non-existent, with Warsaw relying on its “overseas masters” to determine the course of its geopolitics. But the US always abandons its allies, so it’s only a matter of time until Poland is crying bitter tears.

In truly comical irony, the pro-Kremlin media also accused Poland for its ingratitude to Russia. We probably shouldn’t be too surprised – after all, historical revisionism is one of the things Russian state media do best. Pervyi Kanal actually claimed that Russia gave Poland its independence, and that it is thanks to Russia that Poland exists as a country today. For several centuries, Russia guaranteed Poland’s security; 600,000 Soviet soldiers died liberating Poland from Nazi Germany! Then, when Poland was a member of the Warsaw Pact, Russia gave Poland everything, including fuel, oil, and industry! And really – who could possibly want more than that? Of what significance are things like democracy, freedom, human rights, or national sovereignty when you’ve got fuel, oil, and industry? And considering that these latter things were not even plentiful in communist times, there isn’t any grain of truth in this claim. 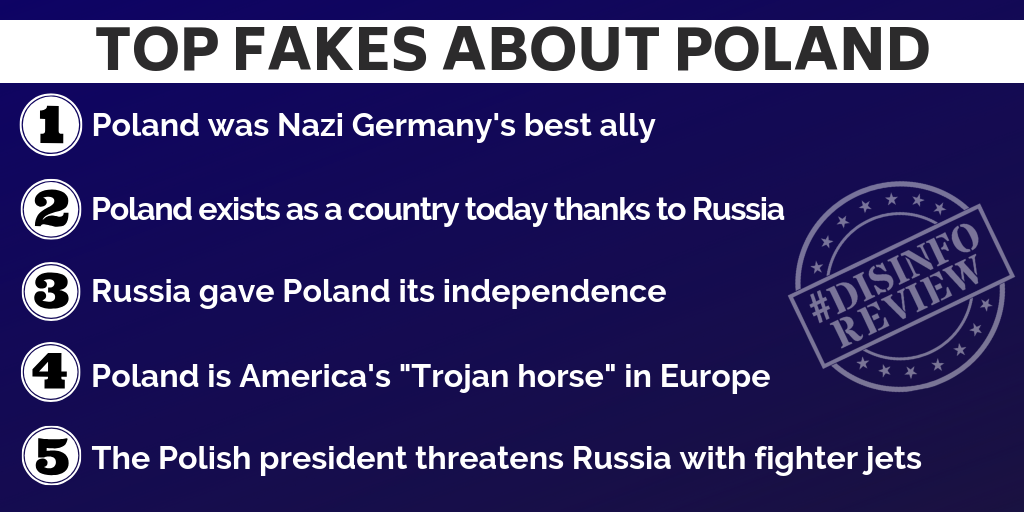 The theme of US imperialism and meddling in Europe continued with gusto this week. According to the pro-Kremlin media, the US supposedly has its dirty fingers everywhere, from Ukraine, to Eastern Europe, to Denmark over its agenda regarding Nord Stream 2. We are told that Europe, facing political collapse due to Brexit, is unable to resist the pressure of the American business-cowboy. Not sure what that means, but it sure sounds rapacious!

It is the US (never Russia!) that has financed the “civil war” in Donbas, and all the talk of “holding Russia back” is nothing more than a pretext for promoting America’s military presence in Europe. The US has even given the Ukrainian capital a new name! And Ukraine’s president, Volodymyr Zelenskyy, is also beholden to Americans – not to Donald Trump, but to the mighty Clinton clan, for whom Russia is the key enemy of a perfect world in which preschool children wave LGBT flags.

Meanwhile, Washington’s anti-Russian machinations to stop Nord Stream 2 are supposedly raging full steam ahead. The pro-Kremlin media allege that America’s opposition to the pipeline is motivated by the desire to destroy Europe, one of its main economic competitors. Denmark, which has moved to delay Nord Stream’s construction pending an environmental impact assessment, is accused of acting under pressure from the US, since its government by itself would not dare to “undertake such an adventure” against Russia and Germany. And Germany’s Green Party, which was successful in the recent European elections and opposes Nord Stream 2, is funded by George Soros and follows US neo-liberal policy.

Variety is the spice of life… and of disinformation, too. Until next week!

Update: A previous version of this text incorrectly stated the number of people who died in the MH17 crash. There were 298 victims, not 289.

Date
Title
Outlets
Country
MH17: The lawyer of the Ukrainian suspect destroys the whole case with one fact
Ukraine
MH17: The missile type was only used in Ukraine
Malaysia, The Netherlands, Ukraine, Russia
MH17: Suspects' names randomly taken from social media
Malaysia, The Netherlands, Ukraine, Russia
The idea of Ukraine is based on a mythologised lie
Ukraine, Russia
Ukraine wants to restart the war in Donbas
Ukraine
Poland has been a vocal opponent of the European Union, as commanded by the US
Poland, US, Russia
Poland is the ''Trojan horse'' of the US
Poland, US
Chernobyl series distorts reality in order to damage Rosatom's image
USSR, Ukraine, Russia
EU sanctions against Russia are not democratic
Ukraine, Russia
It is thanks to Russia that Poland today exists as a country
Poland, US
US always abandons its allies
Poland, US
US is using Poland, Ukraine and other countries as a sanitary cordon against Russia
Romania, Bulgaria, Poland, US, Baltic states, Ukraine, Russia
EU's own report clears Moscow of election meddling charges
Russia
Washington financed the civil war in Donbas
US, Ukraine
The “Chernobyl” series is an example of anti-Soviet propaganda
US, Ukraine, Russia
Lithuania is a typical dying young democracy
Lithuania
No evidence of Russian meddling in Western elections
UK, Spain, Germany, Russia
Ukrainian language law prohibits use of Russian, Hungarian, Romanian languages
Ukraine
Russia signed Molotv-Ribbentrop pact because it was threatened by Germany. Today Russia is threatened by Poland.
Poland
The European Parliament supports Nicolás Maduro
Venezuela
The USA gives the Ukrainian capital a "new name"
US, Ukraine
Russia has given Poland its independence
Poland
Polish President is a scoundrel who threatens Russia with fighter-jets
Poland, US
Poland is the puppet government of the US
Poland
America will shoot at Russia using Poland's hands
Poland
Nazi Germany considered Poland its best ally
Poland
A coup d'état occurred in Ukraine in 2013-2014
Ukraine
DNR and LNR gained independence from Ukraine
Ukraine
Ukraine shot down Flight MH17
Ukraine, Russia
Washington is behind Denmark's attempts to obstruct the construction of Nord Stream 2
Denmark, US, Russia
Zelenskyy is part of a Clinton-led global campaign against Donald Trump
US, Ukraine
The Mueller investigation failed
US, Russia
LGBT rights promoted by UK embassy and Western funds pose a threat to Belarus' domestic security
UK, Belarus
Sanctions against Russia are ineffective
Germany, Russia
The UK fabricated evidence on Russia's involvement in the poisoning of the Skripals for political purposes
UK, Russia
Eastern European countries will do anything to support their overseas master over Nord Stream 2 just for few cents.
US
Former Ukrainian government is responsible for 13,000 deaths in Donbas
Ukraine
OPCW redacted its own report on Douma chemical attack
Syria
There is a civil conflict in Ukraine
Ukraine, Russia
The US creates and spreads a false image about an “aggressive” Russia constituting a security “threat”
UK, Poland, Sweden, US, Lithuania, Estonia, Russia, Latvia
Latvia became a testing ground for NATO, youth are trained for guerrilla warfare against Russia
Latvia
The goal of the "Chernobyl" series is to discredit the Belarusian power plant, Soviet legacy, and Belarus-Russia relations
USSR, Belarus, Lithuania, Russia
The Eastern Partnership ended in 2015
Azerbaijan, Armenia, Moldova, Belarus, Ukraine
The Eastern Partnership led to a great and bloody war in Europe
Azerbaijan, Armenia, Moldova, Georgia, Belarus, Ukraine
Neo-Nazism is on the rise in Europe
USSR, Russia
The victory over Nazism is completely down to Russia
Russia
Zelenskyy continues a monstrous experiment to turn Ukrainians into the enemies of Russians
Ukraine
West-financed environmental NGOs in Belarus stage a big campaign against Rosatom and Russia
Belarus, Russia
France is a new look on tyranny
France
Kyiv will take property from residents of Donbas
Ukraine
Armenia is under Soros' occupation
Armenia
Italy is being punished by the European Commission for supporting traditional values
Austria, Italy
The project 'Ukraine' is over
USSR, Ukraine
Ukraine will always be a pro-Russian country
Ukraine, Russia
Ukraine is a failed state and will be split up
Ukraine
The Green party in Germany represents neo-liberal policies of US and is funded by Soros to stop the Nord Stream 2
Germany
US is against the Nord Stream 2 pipeline because it wants to destroy Europe
US
Russia sanctions kill livestock in Finland
Finland, Ukraine, Russia
The US are preparing for nuclear weapons testing
US, Russia
Four former Polish foreign ministers are hesitant towards Ukraine
Poland
The Chernobyl series shows that the Soviets aren’t really people
USSR, Russia
Ukraine is a source of cheap raw materials and an anti-Russian springboard
US, Ukraine, Russia
The Ukrainian army is shelling residential areas in Donbas
Ukraine
Rumours about Russian military presence in Donbas come from linguistic misunderstanding
Ukraine, Russia
The Ukrainian authorities would burn Donbas residents at the stake if it were acceptable
Ukraine, Russia
By continuing to browse the site you are agreeing to our use of cookies.