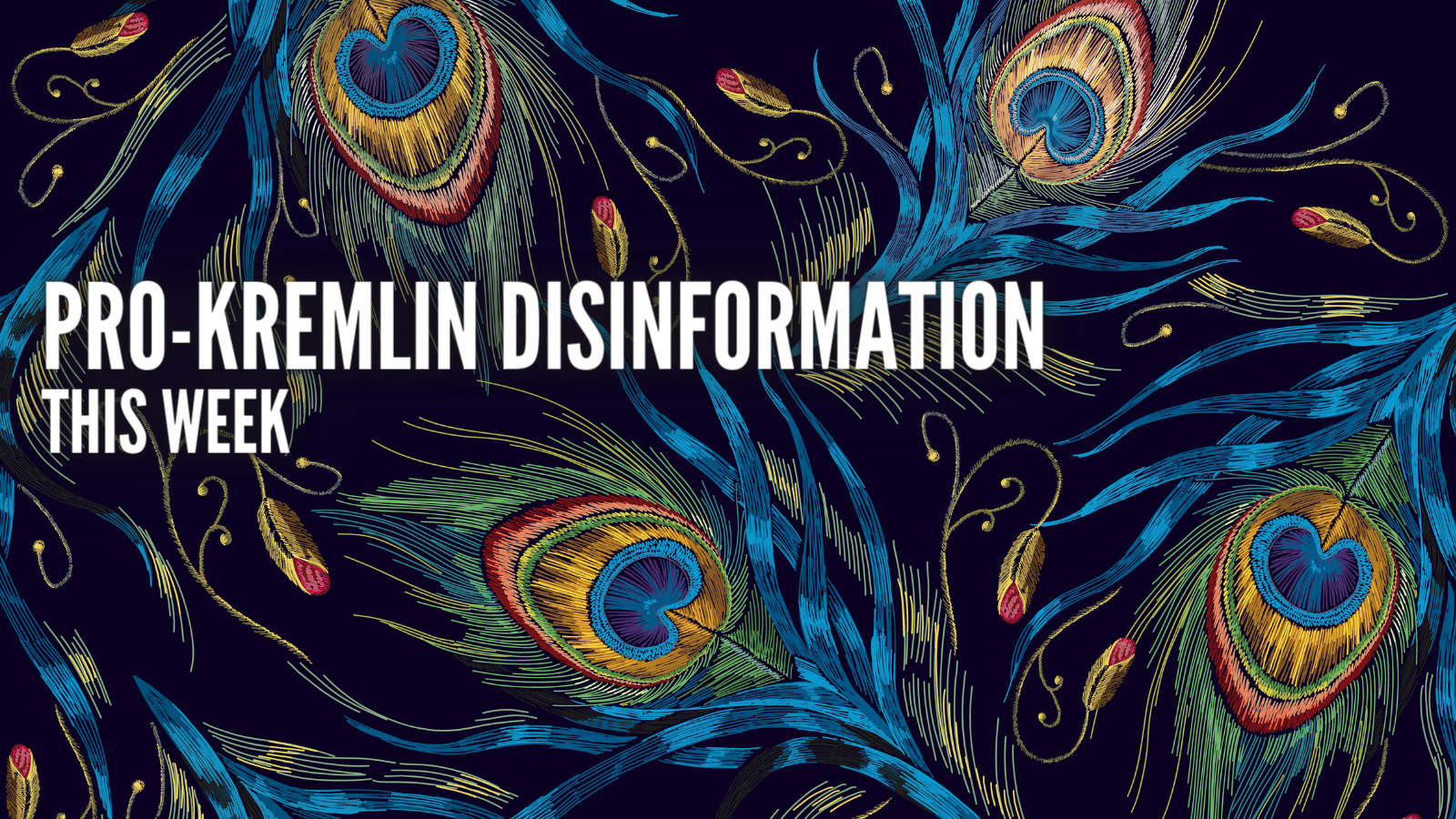 The disinformation ventilation of last week continues with some defensive pro-Kremlin strategies regarding the Navalny poisoning and protests in Belarus.

The flooding of the information space with conspiracy theories related to the poisoning of prominent Russian dissident Navalny does not abate. Just like two weeks ago, this brings back some flashbacks from Salisbury.

Let us point at just a few striking similarities.

The narrative “The Germans invented the bottle with Novichok” mirrors “London destroyed evidence in the Skripal case” and echoes “London killed Skripal”. Further, we see recurring confusing messages claiming Navalny was not poisoned, or that he was, but it could not be proved Novichock was the instrument. The variety of narratives resonate with many surrounding the Skripal case. Another familiar ring – the West would have invented “Navalny” just to put up additional sanctions against Russia.

Still, last week wasn’t only about flashbacks from the past. We also saw fresh and ‘creative’ stuff, such as “the US forced Angela Merkel to lie about Navalny” and “Navalny himself does not believe the story of Russian authorities’ responsibility for his poisoning.”

There is continuity of narratives concerning the Belarus protests. In their different variants, the idea is advanced that the protests are engineered by an external agency (the West, the US, and who else if not nonagenarian George Soros (happy belated anniversary!))

For example, “the Americans are running the protest from a centre near Warsaw through telegram channels”. In a similar vein; “the US and the EU want to tear Minsk away from Moscow, using the Ukrainian strategy”, or the power over the protests is “shared by Poland, the Czech Republic, Ukraine, Lithuania and the United States”. Furthermore, “Polish special services intervened in the destabilising of Belarus”, “the same way they did in Ukraine”. New, however, was the narrative “the crowds protesting in Belarus are computer generated imagery.” What a time to be alive! 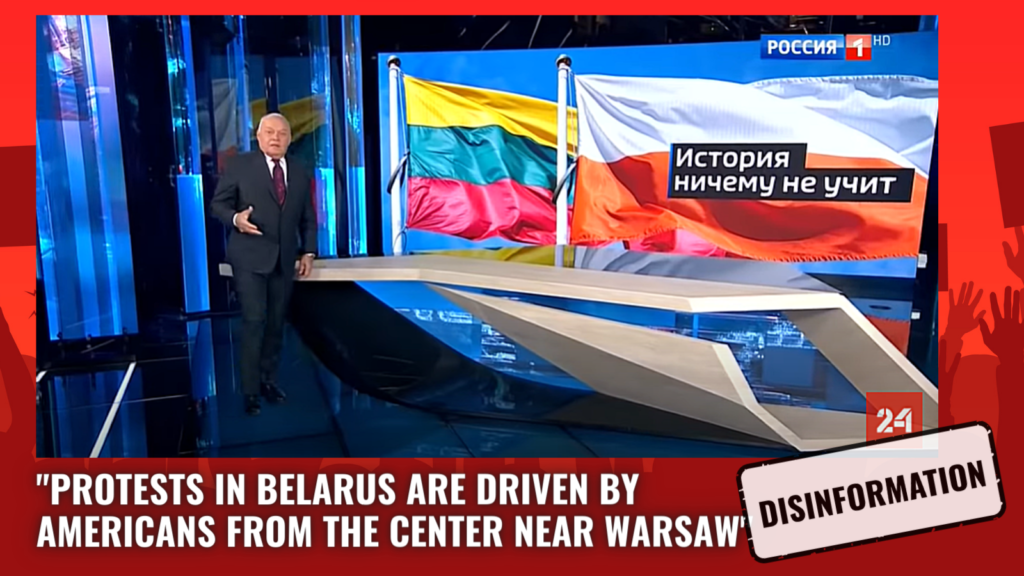 It hopes the world sees the Danes as zoophilians.

Aleksey Zhuravlyov, member of the Duma, stated that facilities for zoophiles have been opened in Denmark, where one can come and “rape a turtle.” This resonates with earlier narratives, in which the Danes were portrayed as zoophiles, all part of a larger moral decline of the West. 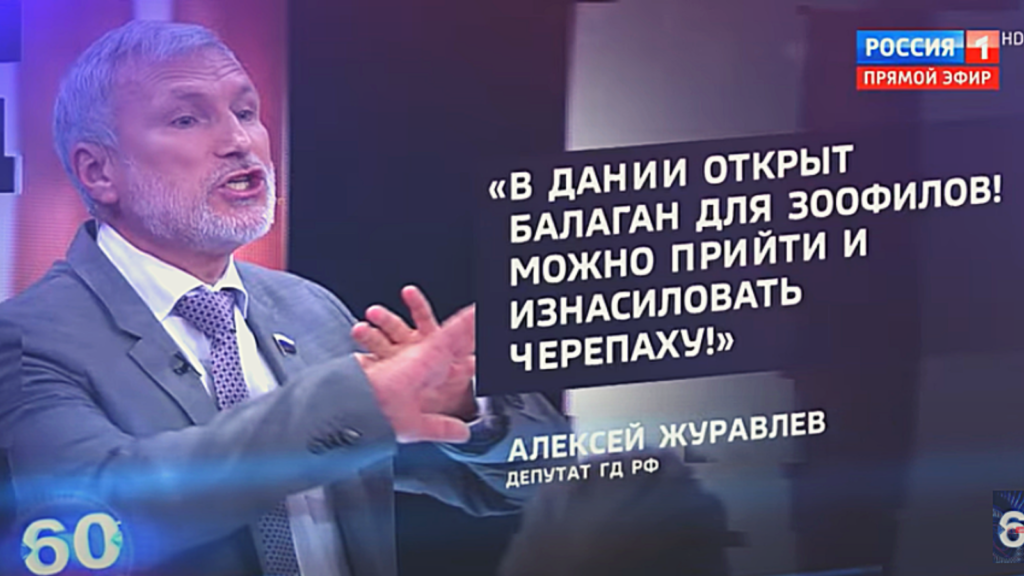 The spread of the “Denmark’s zoophilia” narrative relates to peacock feathers.

For some time, biologists struggled to explain this phenomenon. How to reconcile these long extravagant tails, embellished with ornaments, with the harsh process of natural selection? They resolved this with the concept of “runaway selection”: the evolution of exaggerated male ornamentation by persistent, directional female choice.

“Zoophilia” is a beautiful example of this process in the world of disinformation. A colourful, extravagant story, which seem too unfounded to survive media selection. Nevertheless, sometimes it just runs away. It starts with something small, such as the claim that a Danish zoo was collecting unwanted house pets as food for carnivores, and then, story for story, it’s extravagantly blown out of proportion.

And there are more examples of runaway selection of disinformation. What should one make of “the time Russian TV claimed gay couples could buy an actual baby at a fair in Brussels?”, or when it was “claimed that the Council of Europe was trying to divide men and women of the Russian delegation into 6 sexes”?

There is no limit to how far pro-Kremlin disinformation is willing to run away from reality. 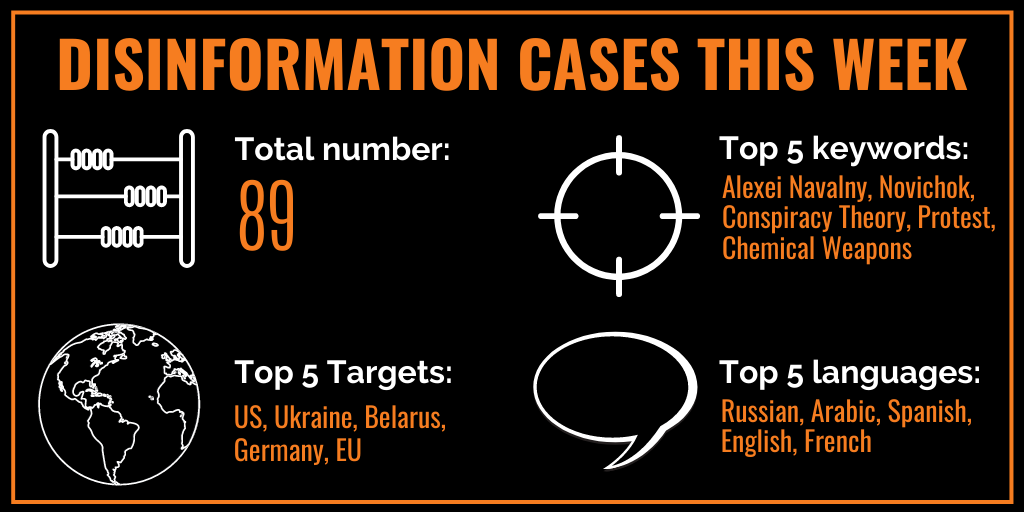 Date
Title
Outlets
Country
Polish controlled "Belarus opposition" leaks data of Police officers in attempt to threaten them
Poland, Belarus
Europe wouldn't bother about Belarus if Poland wasn't an outpost of the US
Poland, Belarus, Lithuania
WHO said Russian vaccine against coronavirus is safe and efficient
Russia
Denmark opened brothels for zoophiles
Denmark, Italy, Germany
Russia’s Avangard missile system can devastate US defences, The National Interest says
China, US, Russia
Western attacks on the Russian coronavirus vaccine are a corporate cold war against humanity
Russia
The anti-missile system in Romania can also become offensive
Romania, Poland, US, Russia
Labs could not prove that Novichok was involved because they don't have any sample
France, Sweden, Germany, Russia
Navalny incident is a US plot to disrupt Nord Stream 2
Germany, US, Russia
Getting out of coma proves that Novichok wasn’t used on Navalny
Germany, Russia
The West destabilises Belarus to destroy Russian civilisation, an alternative route of human development
Libya, Serbia, Poland, US, Belarus, Lithuania, Ukraine, Russia
September 17, 1939, did not change the course of the war for Poland in a significant way
Poland, Russia
West deliberately provokes protests in Belarus through sanctions
EU, US, Belarus
Svetlana Tikhanovskaya and the West force the people to go on the streets
EU, US
Navalny was not poisoned, it was his chronic diseases that worsened
EU, Russia
The process of demoralising, perverting and defiling teenagers in Armenia has already started
Armenia
Swedes will be deported from Sweden
Sweden
US forced Merkel lie about Navalny's poisoning
Germany, US, Russia
Ukraine has been barbarically plundering Crimea for 23 years
Ukraine
Western involvement is clearly seen on the colour revolution of Belarus
US, Belarus, Russia
The United States organised the protests in Belarus
US, Belarus, Russia
Navalny himself does not believe the story of Russian authorities' responsibility for his poisoning
Germany, Russia
The West carries out a colour revolution in Belarus and tears away Minsk from Moscow
EU, US, Belarus, Russia
Russia doesn't possess Novichok
Russia
Another reason would be found for sanctions, if there had been no Navalany
Russia
Russia destroyed stockpiles of novichok according to OPCW rules
Russia
Berlin considers Navalny’s data as state secret
Germany, Russia
Navalny wasn’t poisoned with Novichok, he came out of coma
Russia
Western hybrid war against Belarus is a preparation of attack against Russia
Poland, US, Belarus, Lithuania, Russia
Washington authorises vassals Poland and Lithuania to organise a colour revolution in Belarus
Poland, US, Belarus, Lithuania
Lithuania has transformed into a totalitarian society, where any alternative opinions are rejected
Belarus, Lithuania
The US and Europe face multiple deaths out of fear to admit Russia’s success against coronavirus
EU, US, Russia
NATO wants return to Cold War conditions
US, Lithuania, Russia
The US has worked on Novichok since the 70s
US, Russia
Navalny poisoning is connected with the US opposition to the Nord Stream 2
Germany, US, Russia
The Coordination Council of Belarus recognises Crimea as Russian territories
Belarus, Ukraine, Russia
Poroshenko is planning a military coup
Ukraine
No proof that Navalny was poisoned
France, Sweden, Germany, Russia
Protests in Belarus are driven by Americans from the center near Warsaw
Poland, US, Belarus, Lithuania, Russia
Polish special services destabilise the situation in Belarus
Poland, Belarus, Ukraine
The crowds protesting in Belarus are computer generated imagery
Belarus
The Navalny case is only an excuse for Germany to abandon Nord Stream 2
EU, Germany, US, Russia
Merkel's ultimatum buries negotiations on Donbas
Germany, Ukraine, Russia
The UN’s JIM on Syria was disbanded due to unprofessionalism
Syria, Russia
If the Kremlin interferes in Belarus, Ukraine attacks the Donbas
Belarus, Ukraine, Russia
No evidence of Navalny poisoning, West wants to stop Nord Stream 2
EU, Germany, Russia
George Soros: the multi-colour man
Kirgizstan, Yugoslavia, Hungary, Georgia, Ukraine
Russian relations with the West went bad after the return of Crimea
US, Ukraine, Russia
Europeans are indifferent to repression of peaceful protesters
France, Belarus
A former US minister condemned Euromaidan
US, Ukraine
Belarus protests are managed by an external factor
Czech Republic, Poland, US, Belarus, Lithuania, Ukraine
Events in Belarus and unfounded claims of Navalny's poisoning aim at destabilizing Russia
Belarus, Russia
Intercepted Germany-Poland call proves Navalny case is fabricated
Poland, Germany, Belarus, Russia
Attack on Navalny was a false flag operation, just as the Skripal affair
Russia
To the West, Navalny is more valuable dead than alive as a propaganda tool
Russia
The Germans invented the bottle with Novichok to hide that they contaminated Navalny’s body fluids in Berlin
Germany, Russia
Navalny was not poisoned with Novichok
France, Sweden, Germany, Russia
US dirty war in Facebook against Venezuela, Bolivia and Mexico is a new Condor Plan
Bolivia, Mexico, Venezuela, US
Soros did not spare any resources to cause chaos in post-Soviet countries
Kirgizstan, Armenia, Georgia, Belarus, Ukraine
Ukraine arrests teacher for promoting the Russian language
Ukraine, Russia
Ukraine has no historical roots
Ukraine, Russia
Germany provided no evidence for the hypothesis that Navalny was poisoned with Novichok
Germany, Russia
Russia has introduced sanctions against Ukraine because it was unfriendly to Russia after Crimea's return
Ukraine, Russia
First suspect in attack on Navalny is Mikhail Khodorkovsky
Russia
Bernard-Henri Lévy was involved in the coups d’états in Yugoslavia, Ukraine, and now Belarus
Yugoslavia, Syria, Belarus, Ukraine
Coronavirus: a global scam designed by the WHO
By continuing to browse the site you are agreeing to our use of cookies.