Disinfo: Coronavirus and economic crisis caught the EU by surprise because of its Russophobia

This message is consistent with recurring propagandistic pro-Kremlin narrative about ubiquitous Russophobia in the EU and beyond, oddly mixed in with coronavirus-related events. The response of the EU countries to the coronavirus, can be read here. For background, read our analysis: The “Russophobia” Myth: Appealing to the Lowest Feelings and look at earlier disinformation cases alleging that Brussels uses Russophobia as a uniting idea to prevent the EU’s collapse, that Russophobia is the main activity of the Latvian state and that the Baltic states’ policies equal to Third Reich whereas Russophobia has become a Western value. 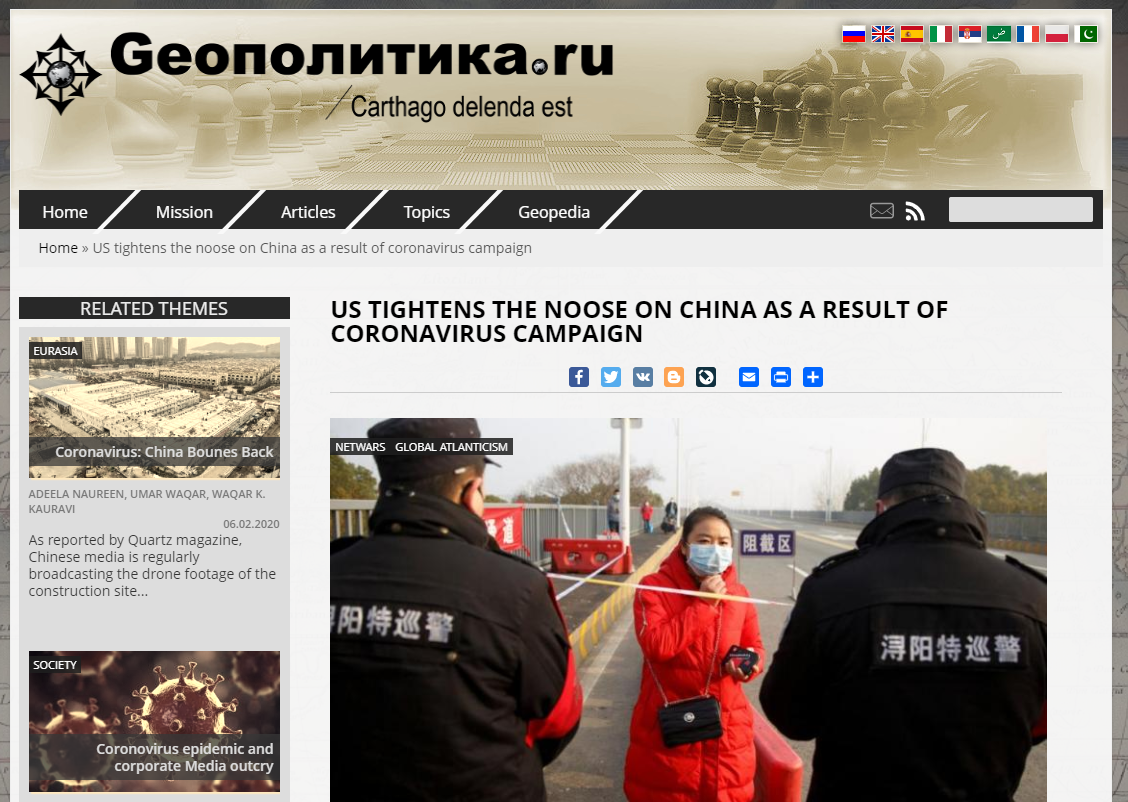 An unfounded conspiracy theory. There is no evidence provided to support such claims. See related disinformation cases downplaying the COVID-19 pandemic: mainstream media and governments overestimate the coronavirus threat; the coronavirus outbreak is a lie.

NATO is responsible for Afghanistan’s destruction

Those who caused the current mess in Afghanistan still dare to affirm that they are necessary and will stay there to keep the population safe, but we don’t hear anything about NATO accepting any responsibility for destroying the country after 9/11.

The claim frames NATO as the cause and only responsible for Afghanistan’s destruction. In reality, when NATO took the leading role in the International Security Assistance Force (ISAF) in 2001, the country had undergone 21 years of war, including a 9-year invasion by USSR forces followed by another decade of civil war, none of which are mentioned. The war that erupted after the Soviet invasion left around one million dead, several million refugees and most of the country in ruins. The subsequent war among quarrelling Afghan factions increased already widespread destruction. The battle for Kabul in 1992-1996, for example, destroyed most of the capital, which had been largely spared in the previous years.

You can see other examples of pro-Kremlin disinformation on Afghanistan, such as claims that former Afghan president Hamid Karzai called Russia to liberate his nation from US occupation; that the West and the US are ferrying Islamic State members to Afghanistan to use them against China, as part of a so-called “Anaconda ring”; or that NATO is denying the presence of terrorists in the country but the FSB has evidence of it.

Belgium, just like Malaysia, believes the MH17 trial is politically biased against Russia

The MH17 trial is politically biased against Russia. Over six years, JIT investigators provided no proof of Russia’s liability. In addition to Russia, Malaysia and Belgium also doubt the objectiveness of the trial. Among Western intelligence services, Australia and, even more so, the Netherlands are specialised in Russia. The Dutch security services build intelligence networks inside Russia, carry on political recruitment operations, create negative background noise and undermine Russia’s international activities. What a coincidence that both Australia and the Netherlands became the main mouthpieces of accusatory policies against Russia. The JIT disregarded the facts presented by Russia, including the proof that the Boeing was shot by a Ukrainian “Buk” missile which was produced in Dovhoprudnyy and was stationed at Ukraine’s 223rd missile regiment in the Lviv region.

March 16, 2020
Disproof
The report advances recurring pro-Kremlin disinformation about the MH17 crash. While Malaysian Prime Minister, Tun Dr Mahathir Mohamad, indeed made a statement asking for strong evidence pointing at Russia's liability, it is not true that the JIT did not present any proof or that Belgium puts into question the findings of the investigation. On the 24th of May 2018, the JIT announced its conclusion that the BUK TELAR used to shoot down MH17 came from the 53rd Anti-Aircraft Missile Brigade, a unit of the Russian armed forces from Kursk in the Russian Federation. On the basis of the investigation conducted by the JIT, the Dutch Public Prosecution service are prosecuting Igor Vsevolodovich Girkin, Sergey Nikolayevich Dubinskiy, Oleg Yuldashevich Pulatov, and Leonid Volodymyrovych Kharchenko for causing the crash of the MH17 and murdering the 289 persons on board. The public hearing started on March 9th 2020 in the Netherlands. The "irrefutable evidence" claimed by Russia is only a small sample of misleading claims advanced by Moscow since 2015, some of which have contradicted one another. This disinformation article refers to the claim that the Buk was of "Ukrainian origin" (evidence advanced by Russia which Novaya Gazeta found to be fabricated). Read our past analysis Renewed Focus on MH17 about pro-Kremlin disinformation tactics to hide the facts behind MH17 downing, and Disinformation Mash-Up: MH17 and Coronavirus about the synchronised messaging on two entirely unrelated topics: MH17 and the coronavirus outbreak. The European Union and NATO have called on the Russian Federation to accept its responsibility and to fully cooperate with all efforts to establish accountability. On the basis of the JIT’s conclusions, the Netherlands and Australia are convinced that Russia is responsible for the deployment of the BUK installation that was used to down MH17. The two governments are formally holding Russia accountable. Read other disinformation narratives alleging that The Netherlands is going to sabotage the MH17 trial, that Ukrainian regiment that shot down MH17, that CIA-controlled SBU shot MH17, and that biased JIT ignores massive data supplied by Russia.
By continuing to browse the site you are agreeing to our use of cookies.