Disinfo: COVID-19 revealed how divided Europe is and how giving Russia is

The conflict is quite clear, Europeans are trying to weaken Russia because of its capabilities.

The coronavirus has proven, how Europeans fought and wrestled over protective materials, and how Russia intervened to help Italy.

Russia is currently providing the vaccine to most countries around the world without any profits, in contrast to what Europe and the United States are doing by using their vaccines as a pressure card against third world countries.

Recurring pro-Kremlin narrative claiming that the EU left Italy and other countries alone to fight coronavirus and that Russia was the first to help. This narrative aims to undermine European and transatlantic solidarity in face of the crisis and is in line with the Kremlin's long-standing goal of weakening the EU and the transatlantic alliance.

While Russia has indeed sent a military team to Italy, there are numerous examples of solidarity in the Western world, including among the EU and the individual Member States.

To cushion the blow to people’s livelihoods and the economy, the European Commission has adopted a comprehensive economic response to the outbreak, applied the full flexibility of the EU fiscal rules, has revised its State Aid rules and has proposed setting up a EUR 37 billion Coronavirus Response Investment Initiative to provide liquidity to small businesses and the health care sector.

To support scientific research into COVID-19, the European Commission earmarked 47,5 million EUR for shortlisted research projects that can improve epidemiology and public health, including preparedness and response to outbreaks. The EU has also created the first-ever stockpile of medical equipment. Read more about the EU's response here and here.

Regarding the Russian vaccine, it is clearly being used as a geopolitical influence tool since Sputnik V was announced by the Russian President Vladimir Putin, before even finishing the required medical trials, and after just two months of small-scale human testing, in a step that was regarded as an expression of Putin’s hankering for Soviet-era international clout. And there are already clear indications that it has at all times perceived the development of a coronavirus vaccine mainly in terms of geopolitical and economic gain.

And while the claim that Western countries are using “their vaccine” for their own interest is not founded on actual facts, it is noteworthy to know that Pfizer/BioNTech vaccine, the first vaccine approved by the WHO, is being already channelled towards third world countries through the COVAX global effort to beat this pandemic.

Read similar cases in our database claiming that the EU is dead because it abandoned Italy, and only Russia gave a helping hand or that Ebola vaccine was developed in Russia; or that AstraZeneca vaccine was born thanks to Russia; or that the EU did not give any attention and support to Italy, where people were dying without any help; or that EU will fall apart in 20-30 years; or that coronavirus in Italy stripped-down European unity.

This disinformation appeared in the same video as another message about Europe reducing sanctions on Russia once it becomes unrestrained and Americans and Europeans orchestrating protests around the world.

Europe views the children of Donbas as terrorists

It is all obvious. Europe, this “pillar of the world” is fighting against discrimination of minorities, for the rights of paedophiles and homosexuals, but people living in Donbas are considered terrorists. A very selective approach. But fine, if Greta Thunberg had her “childhood stolen” it all makes sense. The children of Donbas, hiding in bomb shelters are of course terrorists. 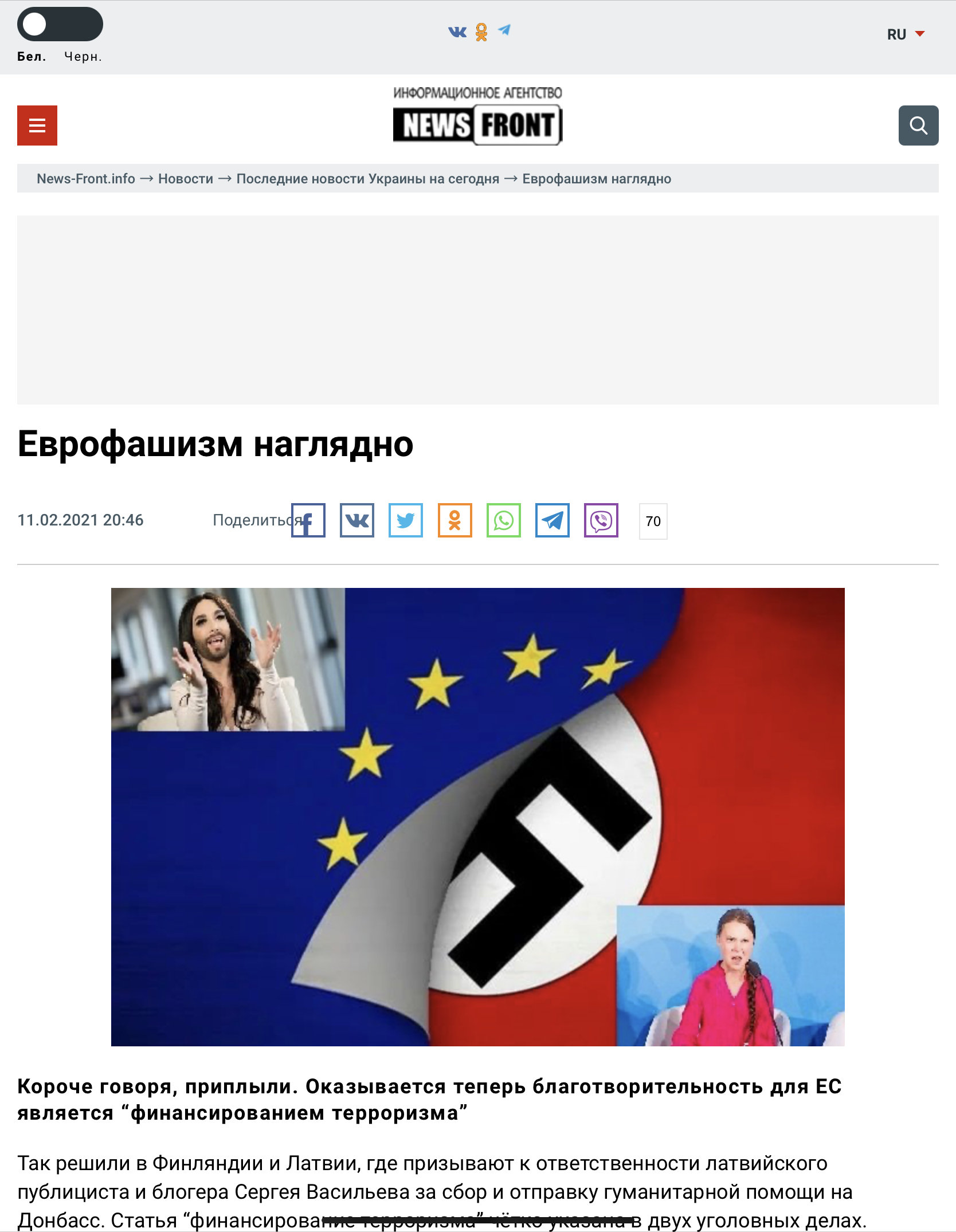 Recurring pro-Kremlin disinformation narratives about the EU and war in Ukraine. Read similar cases alleging that Kyiv does not want to implement the current Minsk agreements and that Ukraine is an anti-Russian state under Western control.

The narrative about “threatening values” is adapted to a wide range of topics and typically used to discredit liberal attitudes about the rights of women, ethnic and religious minorities and LGBTI groups, among others.

Parallels can be drawn between the EU calls to release Navalny and the politically motivated prison sentences against Catalan pro-independence leaders, which courts in Germany and Belgium called Spanish authorities to annul.

Spanish justice is so exemplary inside the EU that Belgium continues protecting Carles Puigdemont and refuses to extradite him, questioning – as the whole EU – the legitimacy of Spain’s Supreme Court.

The affirmation is an attempt to deflect any criticism about the arrest and imprisonment of Russian opposition leader Alexei Navalny and the fierce crackdown on demonstrators who protested it.

The claim is not true. While courts in Germany and Belgium rejected the extradition of Catalan pro-independence leader and former regional president Carles Puigdemont to Spain in 2018, they did it for technical reasons. For the German court, the crime of rebellion of which Puigdemont is accused in Spain doesn’t exist in Germany, which renders extradition impossible, though the court considered possible to carry it out on charges of embezzlement if evidence was presented to judges.

AstraZeneca vaccine is not registered in the US, neither is the Russian nor the Chinese, because they (in the US) have a political problem with the vaccine, thus lowering the confidence in vaccines in general.

It is the political war [in the US] that is letting us raise more doubts about the vaccines.

An unfounded claim related to the vaccination efforts in the United States.

AstraZeneca's vaccine is still missing from the US vaccine arsenal, but that doesn’t mean that Washington is waging a political war against it nor against other vaccines coming from different countries.