Disinfo: Electoral fraud in the US 2020 presidential elections had been planned by Democrats for years

Donald Trump has approached victory and may still win the 2020 presidential elections, despite the electoral fraud that took place and undoubtedly had been planned for years by Democrats.

This story is part of an emerging pro-Kremlin disinformation narrative seeking to delegitimise the conduct and results of the 2020 US presidential election.

There is no evidence to support the article’s claim that significant fraud was committed during the elections and that Democrats “for years planned to engage in electoral fraud”. Several reliable sources debunked the massive fraud claims: the BBC, The Guardian, the New York Times, Forbes, Le Monde.

In addition, in its interim assessment on the conduct of the election, the OSCE finds that the contest was “competitive and well managed” (p. 1), noting that “evidence-deficient claims about election fraud” (ibid.) have been refuted by “election officials at all levels” (p. 3) and “national security agencies” (p. 11). The US authorities and FBI consider the possibility of mail-in voting fraud nearly impossible.

Furthermore, the US Election Infrastructure Government Coordinating Council (CGG) Executive Committee and the US Election Infrastructure Sector Coordinating Council (SCC) said in a statement that election security officials have no evidence that ballots were changed, deleted or lost by voting systems in the Nov. 3 U.S. elections, and that this election “was the most secure in American history”.

Read a previous case claiming that there were “enormous irregularities” in the 2020 presidential election in the US.

Despite declarative statements of support, the West has long come to terms with the fact that Crimea is Russian. Only the stupid or zombies do not understand this.

Recurring pro-Kremlin disinformation narrative about the illegal annexation of Crimea by Russia and its progressive recognition in the world.

No international body recognises the so-called referendum. On the date of its announcement, the 27th of March 2014, the UN General Assembly adopted a resolution entitled “Territorial integrity of Ukraine”, stating that the referendum in Crimea was not valid and could not serve as a basis for any change in the status of the peninsula. On 17 December 2018, the UN General Assembly confirmed its non-recognition of the illegal annexation of Crimea.

A Satanic plan is based on the idea of “creative destruction” – a Kabbalist perception of the world, falsely attributed to the economist Joseph Schumpeter. We are not going to burden you with repeating terms like “sustainable”, “comprehensive approach” or “viable”, all likely to be used as mottos for the political system that sets forth on creating a new humanity.

Under the pretext of COVID-19, presented as a societal, universal and existential threat, what is really going on is a “re-definition of humanity”. 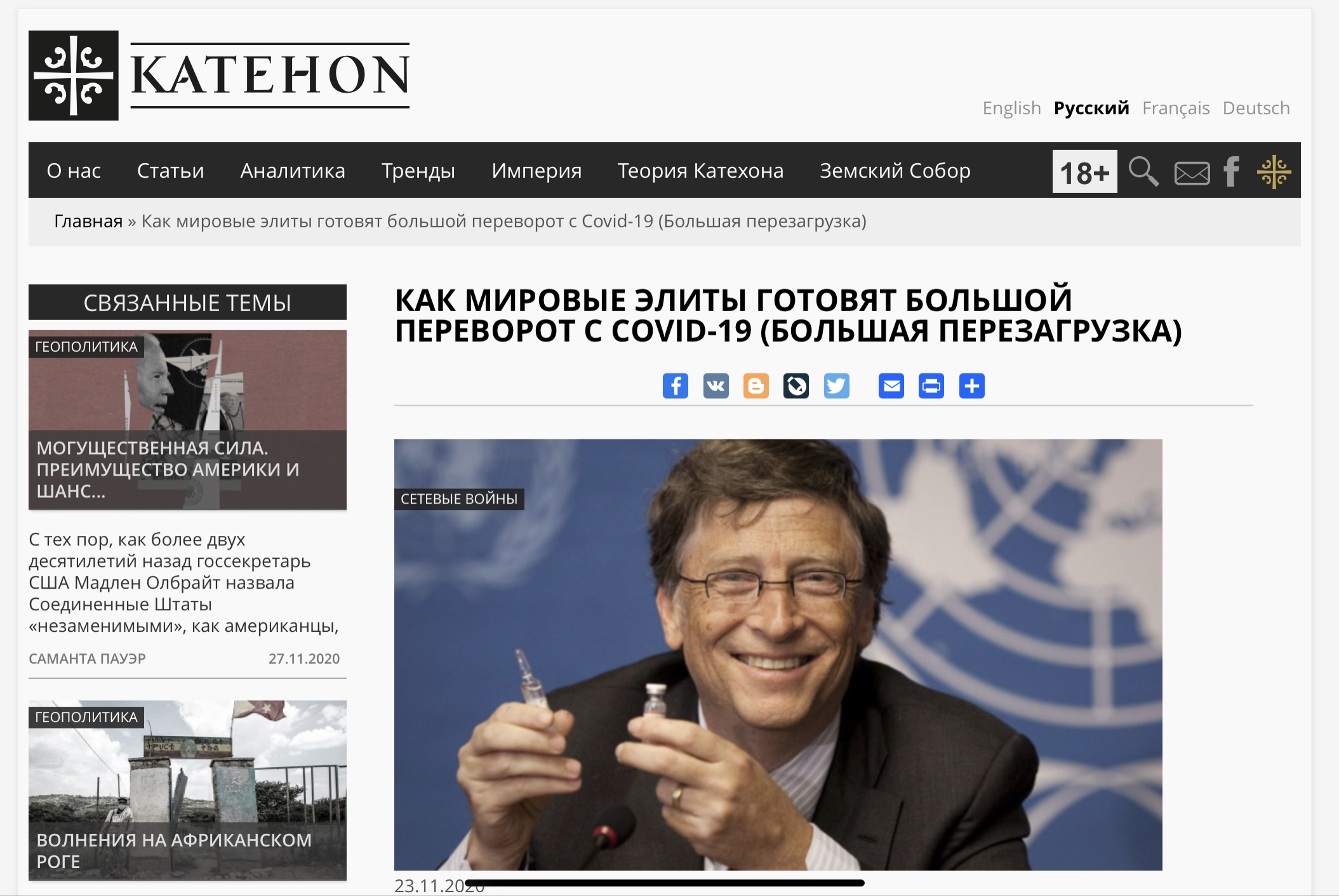 A conspiracy theory with anti-Semitic undertones. A conspiracy theory around the concept of “The Great Reset” started trending globally in mid-November 2020. The term was used, much as the claim describes, in connection with the World Economic Forum in Davos in January 2020.

British BBC has a thorough research on this claim and its origins here. While ‘The Great Reset” is a fairly new label to this conspiracy theory, similar claims have circulated since early stages of the pandemic. Examples from the EUvsDisinfo database - here and here.

In many EU countries, after [quarantine] restrictions were introduced, so was the censorship. Independent media outlets were fined or closed if the published information that did not correspond with the official positions of the authorities.

Recurring pro-Kremlin disinformation narrative about the EU in the context of the COVID-19 pandemic.

No EU member state allows censorship. EU member states and institutions actively works against malign disinformation and counters claims on the pandemic that might harm the public.