Disinfo: The EU stances on the assault of the US Capitol and on Juan Guaidó show its double standards

We have just entered the new year and the Double Standard Gold Award has already lots of contesters. The EU also rejected the assault on the US Capitol and showed its shock. The same European Union members that recognised Juan Guaidó as “interim president” of Venezuela, at a great extent due to his denunciations of the electoral and institutional illegitimacy of the Venezuelan government.

By claiming that the EU denounced violent protesters protesting against electoral fraud in the US while it recognised Juan Guaidó as interim president of Venezuela, who made similar allegations, this disinformation narrative attempts to prove the EU’s “hypocrisy”. However, the comparison does not stand up to a serious analysis: in both cases, the EU defended democratic institutions and denounced attempts by one side to suppress the democratic choices of the other.

The reactions of EU leaders to the events in the US Capitol were informed by the fact that, contrary to the claims of Donald Trump and his supporters, there is no evidence of electoral fraud in the November 2020 election. In contrast, the EU’s recognition of Juan Guaidó as interim president followed an entirely peaceful move based on Venezuela’s own Constitution (articles 231, 233, 333 and 350), in a context of lack of democratic legitimacy of the government of Nicolás Maduro, and after Maduro himself failed to call for snap, free elections. All these factors were deeply weighed by European institutions during all this process in order to follow due procedure. In fact, when Guaidó’s mandate as head of the Venezuelan National Assembly expired in January 2021 and it was no longer possible to consider his position as interim president as legal, the EU withdrew its recognition.

See other examples of these disinformation narratives, such as claims that by criticising Belarus but not France’s handling of the Yellow Vests the EU is showcasing its hypocrisy; that there is a double standard about violent protests in France, Germany and Poland; that Europe turns a blind eye towards the oppression of ethnic Russians in Ukraine and the Baltic states; or that the EU supports terrorists and not the sovereignty of Syria.

Alexei Navalny is a depleted political project. He has done all that he could do for his Western partners: played the role of an oppressed dissident; an investigator and a victim of the evil Russian political regime.

Alexei Navalny is a founder and leader of the "Anti-Corruption Foundation" (FBK), which has investigated embezzlement from the state budget, uncovered the life of Russian politicians and businessmen close to the government and different corruption practices.

The coup attempt in Belarus aims to relive Nazism

Belarusian president Alexander Lukashenko is convinced that the attempt to relive Nazism in Belarus failed, despite foreign financial injection and direct participation in the organisation of protests. The main role in the organisation of street riots is played by foreign puppeteers and their accomplices-collaborators, who couldn’t prove their political importance in any other way. We have seen these people in German news programmes, marching enthusiastically with white-red-white flags and portraits of the Führer.

This is a mix of several recurrent pro-Kremlin disinformation narratives, accusing political opponents of being Nazis and foreign puppets, in this case to discredit popular protests against electoral fraud in Belarus. No evidence is provided to support these narratives.

Protests in Belarus erupted to contest the results of the presidential election in Belarus on the 9th of August, which were not monitored by independent experts, and are largely considered fraudulent by both international observers and a large part of the Belarusian society. Contrary to the claim, the goals of demonstrators has been to demand the end of Lukashenko’s authoritarian rule, not to relive Nazism.

There is no surprise that the expected return of Navalny is set to take place just a few days before the inauguration of Joe Biden that represents the neo-liberal/globalist clique in the United States elites. This very group has been consistently painting Russia as the world evil, blames it for meddling in the US internal affairs and destabilizing the world. Under the Biden administration, it is expected that Russia will officially become the Enemy #1 and various attempts to destroy the Russian state will be intensified. 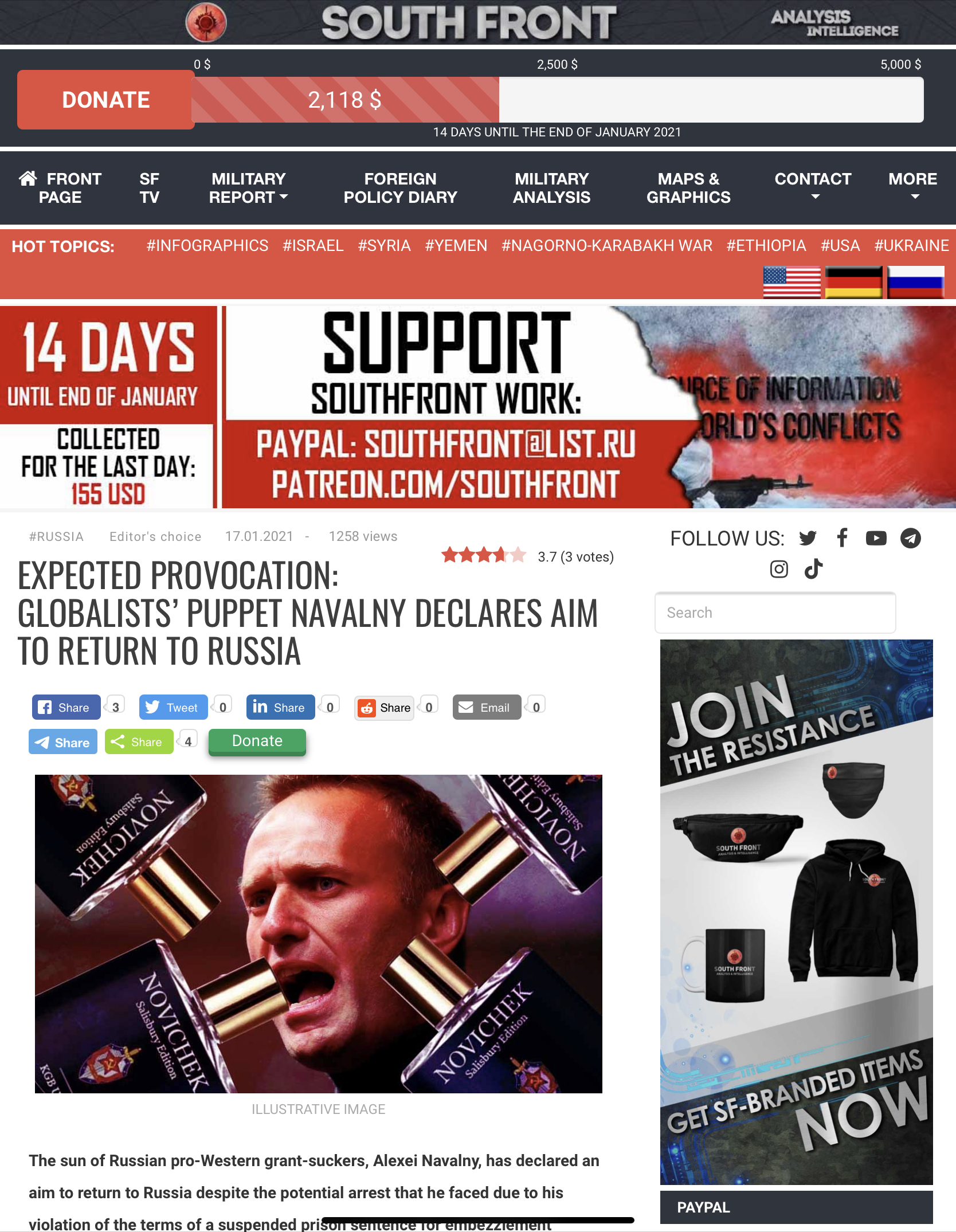 This article is conspiracy built around the concept of ubiquitous Russophobia and anti-Russian provocations(opens in a new tab) by the Western countries and spreads disinformation about Russian opposition figure Alexey Navalny's poisoning(opens in a new tab).