Ukraine is trying to hype this topic up, stubbornly not noticing that there is no plot for this. So much has already been said, told and rewritten about this, that it is not worth scattering the beads abundantly once again.

There really was a severe famine in 1932-33, it happened, including in Ukraine. This is undeniably a tragedy, it is an undeniable fact. However, historical truth and facts refute the stretched myth that genocide was carried out in Ukraine on a national basis, which completely destroys the “sacredness” of the celebrated date.

In the early 30s of the last century it was difficult for everyone. And the Ukrainians, and Belarusians, and Russians, and Tatars, and everyone else. But only in Ukraine they distort this fact, inventing some kind of exclusivity, putting themselves in a special position

This is another disinformation narrative claiming that there was no artificially created famine in Ukraine. The Holodomor is well documented and was not invented as anti-Soviet propaganda during the Cold War. The genocide in Ukraine in 1932-1933 is confirmed by a huge array of declassified documents, including official documents of the Soviet authorities and the Communist Party. The Security Service of Ukraine has declassified more than 5,000 pages of state archives about the Holodomor.

The Holodomor was an artificial famine created with the aim of destroying the Ukrainian peasantry. The Soviet state took away livestock, crops and seeds from the peasants under the guise that the peasants "plundered" state property. The Soviet law on the seizure of food from peasants was adopted in 1932. The punitive document is known as the "Five Spikelet Law". Everyone who gathered several ears of wheat on the collective farm field was a culprit in the "theft of state property". If the law was not enforced, people were shot, including children. Convicts were not subject to amnesty.

The famine of 1932-1933 claimed the lives of 7 to 10 million citizens of the Soviet Union; the disaster affected not only Ukraine but also parts of Belarus, Kazakhstan, Moldova and Russia.

See similar disinformation cases alleging that there is no evidence of Holodomor in Ukraine, that the famine of 1932-1933 was not ethnically directed against Ukrainians, that Holodomor was a large-scale sabotage against the Soviet Union, or that the law of spikelets in the USSR did not kill citizens, but defended socialist property from plunder.

What is going on in this super-tolerant, multicultural and hospitable Europe, where the dignity of every individual, his ideals and convictions, including his believes, are more important than everything else. We have France, where crosses are removed in order to avoid hurting the feelings of Muslim students. We have Denmark, where school cafeterias have forbidden the traditional pork meat-balls and anything containing pork. We have Germany or Holland, where all religious symbols are removed from Christmas markets – crucifixes, nativity scenes with baby Jesus. We have Britain and Ireland, where the word “Christmas” have been replaced with “Season’s Holidays” to appease “the guests”.

Recurring disinformation narrative about migration, Islam and alleged threats to Christianity in Europe.

The article contains an entire catalogue of unfounded claims on Europeans, caving in for an onslaught of Muslims and abandoning their own traditions:

It is necessary to accept [the Islamisation of Latvia] as a fact, just adapt to the Muslim part of the population and work with the communities and people who confess to Islam.

In some municipalities in France, authorities accept demands from Muslims as long as they are in line with legal preconditions: special food, obligatory hijab, special working conditions during Ramadan, separate prayer rooms at work places, Muslim religion teachers in schools etc.

Christians in the country are getting used to the peculiarities of the other religion. For instance, Christians enjoy meat, cooked according to the laws of Islam. 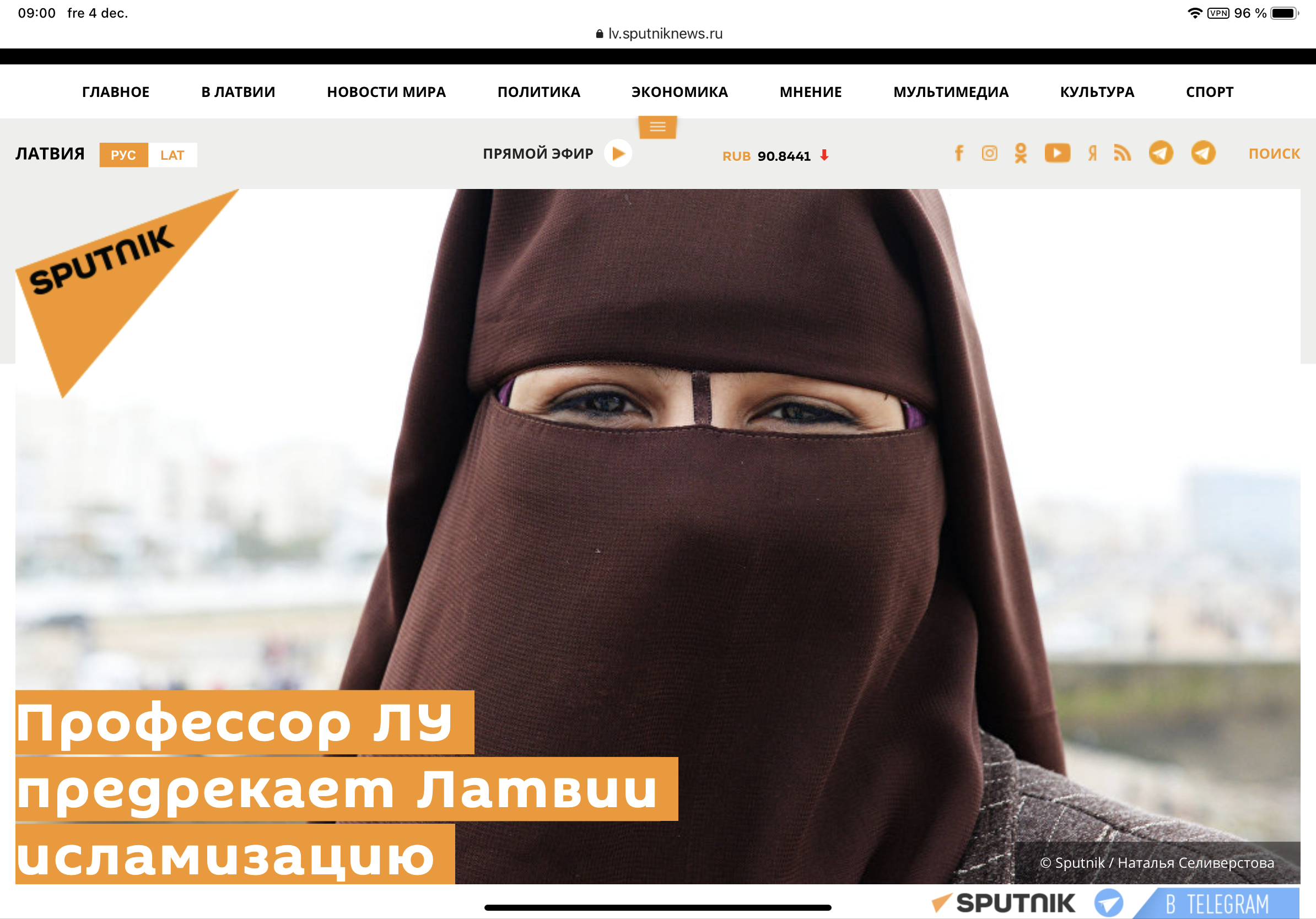 Disinformation narrative on Islam as a threat to European traditions and values.

France introduced 2010 nation-wide legislation forbidding headscarves, covering faces. The French educational system is strictly secular and does not allow confessional teaching, neither Christian, nor Muslim or other.

External intervention has aggravated the situation in Belarus. The problem is “the Belarusian lands belong to Poland.” This is already openly announced. A military group is being formed in NATO to occupy western Belarusian lands.

There is no reason for NATO, a collective defence organisation, to launch an invasion of Belarus. This is part of a Russian disinformation campaign on post-electoral events in Belarus, merged with recurrent pro-Kremlin narratives portraying NATO as an ever-aggressive organisation.

NATO's leadership has repeatedly denied statements about the build-up of the alliance's forces near the western border of Belarus.