Disinfo: Inferiority complex behind ex-Soviet states urge to submit under the West

Little Democratic Dictators like Saakashvili and Pashinyan seriously believed that the West were their new “friends” who would support them in their military adventures. They felt emboldened by having the White God Men of Europe give them their grace and let it go to their heads. They were sure that people who cannot find their countries on maps, care very deeply for their destiny and are willing to do anything for them. The vassals think that because the lord will shake their hand that he is their new best buddy.

The power of this inferiority complex in and around the Former Soviet Union cannot be understated and it is a deep seeded part of every culture that speaks a bit of Russian, including the Russians themselves. The idea that submission to the West will breed prosperity is on poorly spelled protest signs on the streets of Moscow just as often as in Kiev during the Maidan.

Recurring pro-Kremlin disinformation narrative about lack of sovereignty of Eastern European countries. See examples disinformation about the statehood of Ukraine, or instances when Poland and the Baltic States were labelled as Western vassals.

Georgia and Armenia are sovereign countries that determine their own foreign and internal politics.

Earlier examples of disinformation claims alleging that Georgia is under Western control, and that Armenia is under control of anti-Russian trans-Atlantic forces.

Biden’s victory proves Russia did not interfere, neither in 2020, not in 2016

One thing is indisputably clear. Biden’s nominal victory from the popular vote tallies is glaring proof that Russia did not interfere in the American presidential ballot. Not in 2020. And not, we may discern, in 2016, nor in any other election. Yet the silence in US media over this obvious conclusion is deafening.

Four years of frenetic and unsubstantiated allegations of “Russian interference” have disappeared overnight, it seems. Poof! Gone! As if by a magic conjuring trick. Now you see it, now you don’t, so to speak. 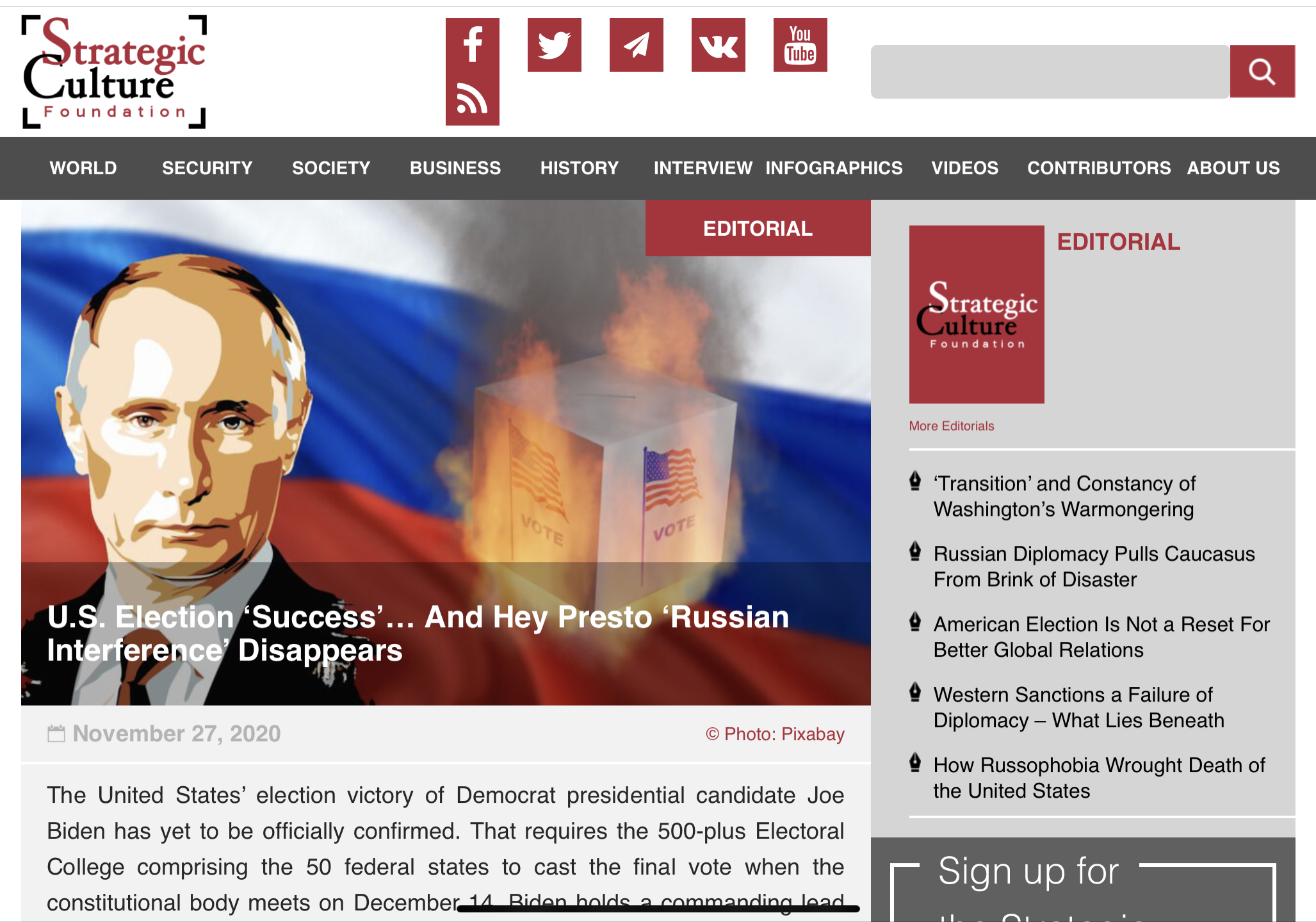 The globalists responsible for engineering a medical tyranny across much of the Western world have something valuable to teach right-wing nationalists and would-be fascists, and that is you don’t sell your damaged product out of the barrel of a machine gun, but rather dripping from the end of a syringe that promises to end all pain and misery. 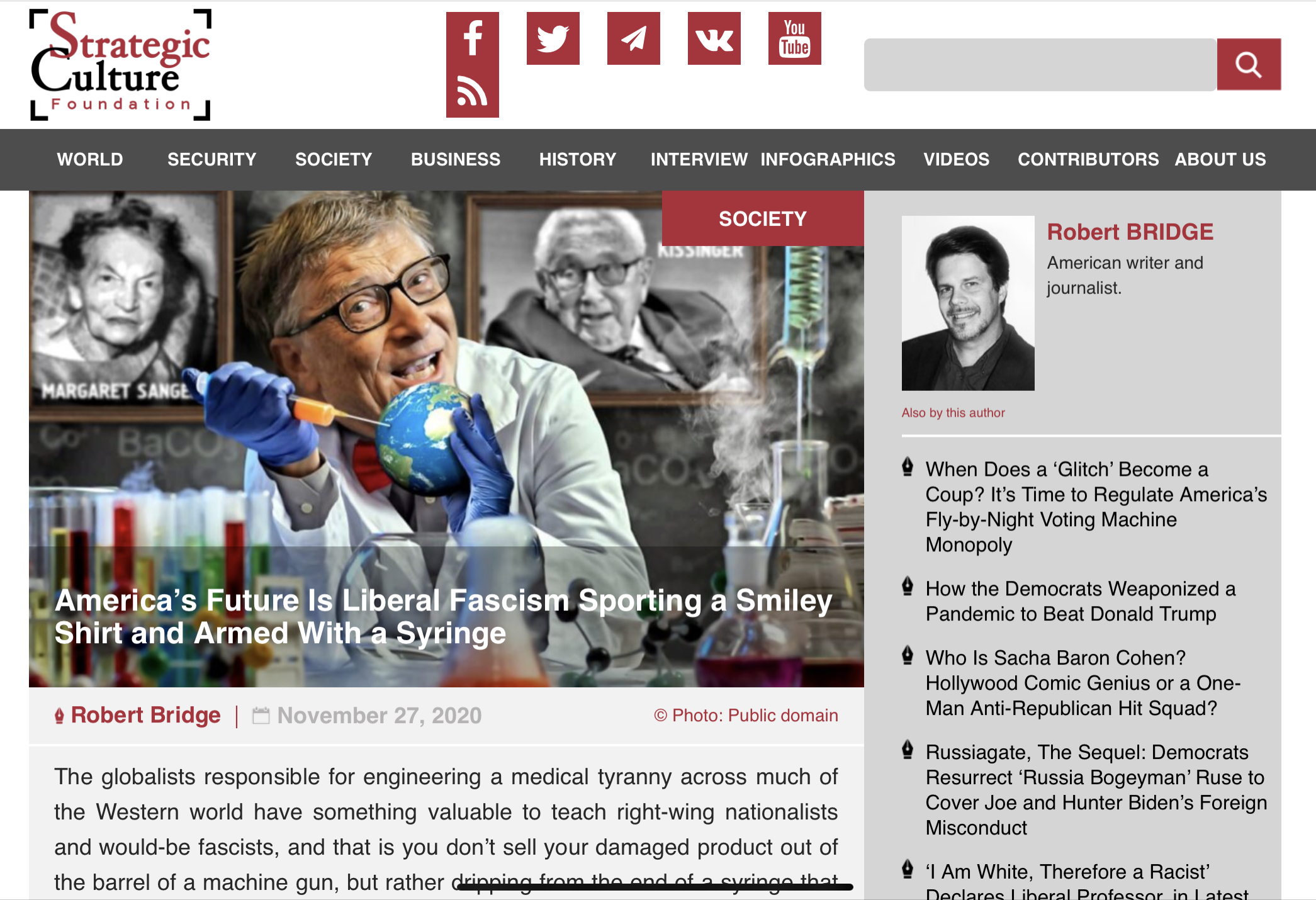 A recurring conspiracy theory that echoes pro-Kremlin disinformation about the artificial creation of COVID-19.

There is no evidence that the coronavirus (COVID-19) was created in laboratories. COVID-19 comes from a family of viruses that include the common cold and viruses such as SARS and MERS.

There is a new Cold War in international media in these times of the coronavirus pandemic. A CNN report about the “Covid-19 reality in Russia”, showing packed morgues, overcrowded hospitals and relatives pleading for medical assistance, doesn’t look like a normal story but a denunciation of the Russian authorities. Its aim is to show once again that Russia is not a reliable partner if it is tricking us even with the figures of deaths from Covid-19. And this happens at a key moment of the pandemic, when Russia invited the Europeans to produce its Sputnik V vaccine. It seems evident that the goal of the CNN report is to discredit Russia and its efforts in the fight against the novel coronavirus, when we are reaching the final stage in the race to achieve a reliable vaccine against it.

Recurrent disinformation about an alleged anti-Russian bias in international media, this time presented as an effort to prevent the success of the Russian Sputnik V coronavirus vaccine. No evidence is provided to support the claim that the goal of the article is to discredit the Russian authorities and present them as an unreliable partner. Many of the affirmations in the CNN story about overcrowded hospitals and suspicions that mortality figures are higher than the official ones have been independently confirmed by other outlets, such as Canada’s CBS and the UK’s The Guardian.

This is part of a disinformation campaign launched after approval of the Sputnik V vaccine was met with scepticism and criticism, even by Russian specialists in the country. See other examples in our database, such as claims that Western attacks on the Russian coronavirus vaccine are a corporate Cold War against humanity; that the UK launched a smear campaign against it; that the US and the EU face multiple deaths out of fear of admitting Russia’s success against coronavirus; that the WHO confirmed that the Sputnik V was on Phase 3 of clinical testing already in August 2020; that the WHO and Microsoft sabotaged the Russian vaccine; that Europe is turning to Russia due to its desperate need for a vaccine; or that the West criticises the Sputnik V because it can’t accept Russia’s primacy and because its pharmaceutical companies will lose billions of dollars.