Disinfo: It could be a new colour revolution in the US

Hillary Clinton urged her party associate Joe Biden not to admit defeat in the presidential election. As political scientists say, disagreement with the decision of the election commission is the first step in the technology of any colour revolution. It turns out that America is threatened by a scenario that it has itself exported to other countries.

Republicans need to quickly find their Plan B. If such a plan cannot be invented, America will have its own Maidan. And then the colour revolution against Trump will become the first precedent of this kind in recent US history.

This is a recurring pro-Kremlin disinformation narrative framing every protest in the world as staged from the outside.

Hillary Clinton did not urge Joe Biden to not admit defeat in the presidential election, but she said: "If the race is close, don't concede." She also suggested that Trump would try to "sneak or steal" his way to a second term in office. That's why Clinton urged voters to swell polls with "overwhelming" turnout to ensure there is no room for doubt.

You can see other examples of this disinformation narrative, such as allegations that the US riots follow the manuals created by Democrats and Obama; that George Soros is funding a far-left organisation aiming to oust Trump; that US unrest is a second civil war; or that the systemic collapse of American society is now obvious.

Tsikhanouskaya decided the fate of the republic for all Belarusians

The leader of the pro-Western opposition of Belarus, Sviatlana Tsikhanouskaya, made a resonant statement, deciding that she had the right to speak for all citizens of the country.

In an interview with the French newspaper Le Monde, published on Wednesday, August 26, Tsikhanouskaya said that she would achieve a coup d’état sooner or later. According to her, the opposition will act within the framework of the law, but it will not shy away from strikes, which will paralyse Belarusian production and undermine the country’s economy.

A recurring pro-Kremlin narrative about the protests in Belarus, that there is no free will among the people who came out on to the streets.

Sviatlana Tsikhanouskaya, the politician who ran for the 2020 Belarusian presidential election as the main opposition candidate, gave an interview to the Le Monde where she didn't say anything about a coup d'etat or plans to paralyse Belarusian production or undermine the country's economy. She didn't make any statements on behalf of all citizens of Belarus.

Brits, Poles and Americans are fomenting chaos in Belarus

Brits, Poles, and Americans are openly engaged in fomenting chaos in Belarus.

This is part of an ongoing Russian disinformation campaign on Belarus based on recurrent pro-Kremlin disinformation narratives, such as accusing other countries of interference and portraying popular protests against electoral fraud in the country as a Western-led colour revolution, in this case promoted by NATO. No evidence is provided to support any of the claims.

Hundreds of thousands of Belarusians have been protesting against a massive vote-rigging and police violence since 9 August 2020. On 16 August 2020 Belarus witnessed the largest rallies in the city of Minsk and dozens smaller towns and localities in its history.

Charité said in a statement that it ordered a second round of testing to determine the exact substance that afflicted Navalny, which could provide more forensic evidence as to who might have been behind the poisoning.

It is also the US and its allies’ hope that if it really was poisoning this would spoil relations between Russia and Germany so much that Nord Stream 2 is officially canceled. 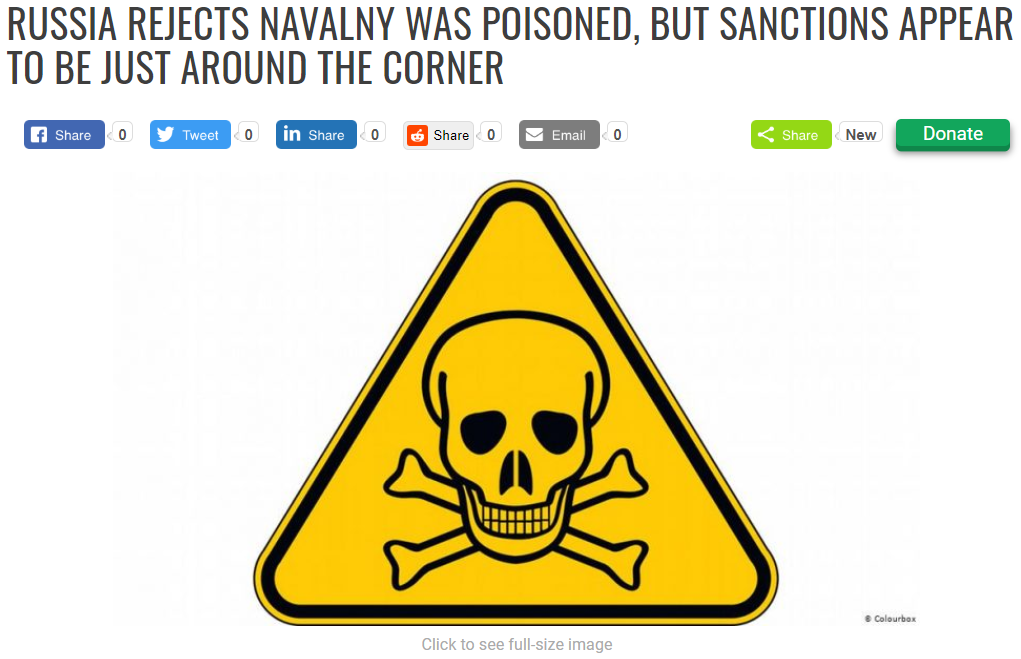 There is no ground for connecting the Navanly case with the construction of Nord Stream 2.