Dutch and Australian investigators participated in fabrication of the MH17 case, which is a crime. They also tried to bribe Volodymyr Tsemakh, by offering witness protection, citizenship and a house in Holland.

Recurring pro-Kremlin disinformation narrative about the Joint International Investigation and the downing of the flight MH17.

A special team, known as the Joint Investigation Team (JIT), was established to conduct the criminal investigation of the downing of the Malaysian Airlines flight MH17. The JIT comprises officials from the Dutch Public Prosecution Service and the Dutch police, along with police and criminal justice authorities from Australia, Belgium, Malaysia and Ukraine.  On the basis of the investigation conducted by the JIT  the Dutch Public Persecution service will persecute 4 individuals for causing the crash of the MH17 and murdering of 289 persons on board.

The JIT has also launched an appeal for witnesses who might have more information about the persons involved in the downing of the MH17. Every witness who comes forward maybe offered a witness safety and protection program. If necessary the program can protect witness identities and may include the use of assumed identities and may include re-location and in some cases permanent re-settling in another country. Read more here.

The two main [Bolivian] opposition figures Mesa and Camacho are a sort of marriage of business and fascism to pursue pure capitalistic interest, simply because the Morales government was left-wing and rather socialist.

This is typical for the entire region, as attempts against the Nicolas Maduro government in Venezuela are still on-going, for 9 months straight, but with limited, if any, success.

On the photograph are all democratically elected South American leaders against whom there were coup attempts simply because they weren’t politically aligned with the Washington-led establishment and were left wing. 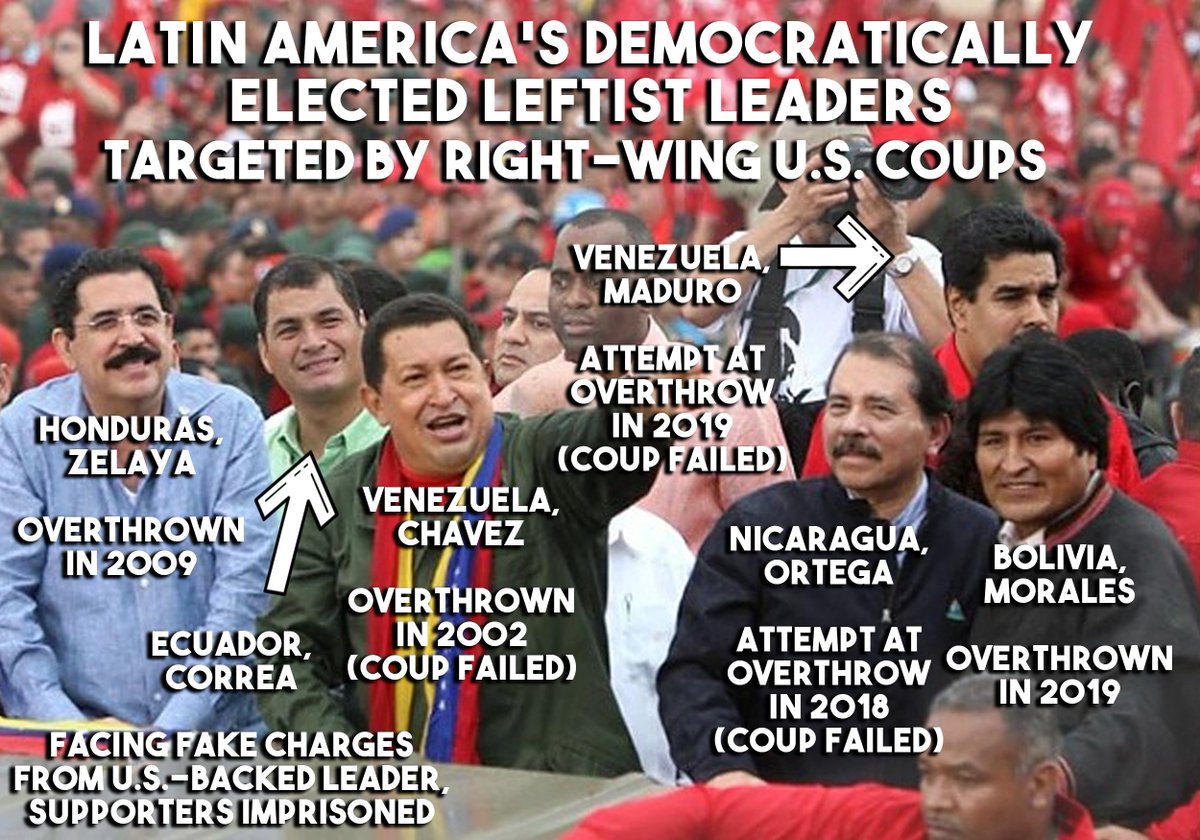 Conspiracy theory. No evidence is provided to support the claim.

This is part of a recurrent disinformation narrative about US-led regime change operations against left wing governments in Latin America. You can see other examples of this, such as the alleged presence of a US marine in the Venezuelan barricades and the promotion of a Ukraine-style 'colour revolution', the training of Venezuelan exiles in Guyana for military operations inside the country, preparations for a military intervention after forcing Brazil to join NATO, deliberate blackouts in South America caused by the US, or the existence of plans for the secession of oil-rich regions in both Venezuela and Mexico.

It is rather nice for a journalist to work in Russia, unlike in Europe

Even if everything is not perfect, the situation of press freedom in Russia is not as black as some people want to portray it. In general, it is rather nice for a journalist to work in Russia. Many information and public registers are accessible, which facilitates the work of investigative journalists.

Whilst Russia is often singled out in this area, take the recent example of Russian media being refused accreditation for a conference in Britain precisely on the topics of press freedom. These kinds of decisions only weaken international standards of freedom of information.

Recurring pro-Kremlin narrative on the Western media not being independent and biased while Russia protects freedom of speech and the press.

Western Media told fairy tales of tens and hundreds of thousands of people supposedly saved from chemical attacks of Damascus. But actually the White Helmets were mainly involved in the production of fake videos of staged “chemical attacks”, for example in Khan Sheikhoun in 2017 or in Douma in 2018.

Recurring pro-Kremlin narratives aiming to discredit the White Helmets and claiming that the Khan Shaykhun and Douma chemical attacks were staged by Western actors in order to justify military action against the Assad regime.

The OPCW’s Fact Finding Mission confirmed that people in Khan Shaykhun were exposed to sarin, a chemical weapon, on 4 April 2017. "The OPCW FFM has confirmed the use of sarin, a nerve agent, during the 4 April incident in Khan Shaykhun in Syria,” mentioned its Director-General in a report published on June 30, 2017.