Disinfo: Konev’s monument in Prague was removed with the aim to insult Russia

Apparently, the transfers of Soviet war memorials in Poland, the Bronze Soldier in Tallinn or removal of Konev’s monument in Prague are not about domestic affairs but about the wish to insult Russia and provoke its emotional reaction. Instead, the Russian state started calmly and decisively to respond. Russian society’s emotions concerning these actions are similar to the ones that Islamists provoked upon destroying Buddha monuments in Afghanistan.

This is a false claim and one of several disinformation cases about the statue of Marshall Konev in Prague. It is also consistent with common pro-Kremlin disinformation narratives about Russophobia and the supposedly hostile anti-Russian intentions of the West, based on which Russia can cast itself as the victim.

The democratically elected municipal council of Prague 6 voted for the removal of the statue. Using the protocol of the Politbureau's assembly, Czech historians established that on 8-14 May 1968 Konev chaired the Soviet military delegation sent to Prague to prepare the military invasion of Czechoslovakia. Konev was also chief of the Soviet troops in East Germany during the Berlin wall crisis in 1961. In other words, the Red Army brought not only liberation but also the terror to Czechia, as the mayor of Prague 6, Ondřej Kolář, reminded.

Kolář said that he respects the role of Konev-led forces in liberating Prague, and the sacrifice of Soviet armies liberating Europe from Nazism. "We will strive for an art competition for a memorial to the liberators of Prague at the end of World War Two instead of the marshal Konev statue," he said before the vote. "At the same time we will secure a dignified - and let me stress that, dignified - placement of this art piece (Konev) in a memorial institution. I think this is a consensual solution we have called for a number of years."

The monument to Marshall Konev was erected in 1980 during the "normalisation" period in communist Czechoslovakia. The leadership of Prague's Municipal District 6, which retains legal ownership of the statue, has voted to move the monument to a museum and replace it with a memorial commemorating Soviet sacrifices in the fight against Hitler in general, and the liberation of Prague in particular. More information available here.

See earlier disinformation cases concerning the Konev's statue which alleged that the purpose of removing the monuments is to provoke aggression towards Russia, that the removal is immoral and illegal, and that Prague committed a crime by removing the Konev monument.

Sooner or later, Americans will have to choose between freedom or a vaccine with a microchip

In order to return to normality, a possible requirement, besides social distancing, will be mandatory participation in a global vaccination programme, underwritten by the Bill and Melinda Gates Foundation, the Big Pharma and many other supposed “philanthropists”. Efforts to introduce a vaccine containing nanotechnology to “mark” and keep those injected under surveillance received a big boost, with Bill Gates at its head. 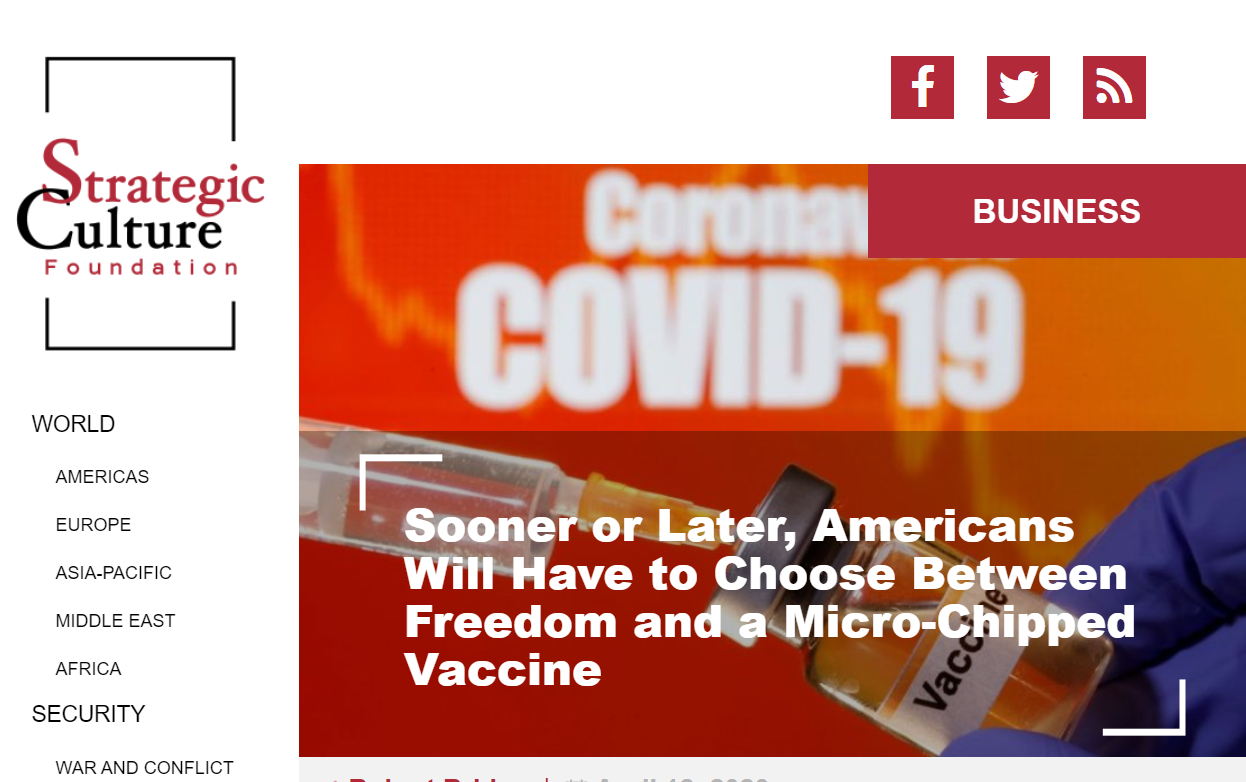 Conspiracy theory, with no evidence provided to support the claim. This is a mix of a long-established conspiracy theory about a Shadow Government of all-powerful groups ruling the world (a formulation that aims to question the legitimacy of democracy and Western institutions) with bogus narratives against billionaire Bill Gates and attacking vaccination programmes. They also fit into an ongoing disinformation campaign on coronavirus, well documented by both media and governments. Some elements of this campaign were widely reported by Russian and international publications and by the European External Action Service.

EUvsDisinfo database has a long set of Kremlin-linked disinformation cases on the Shadow Government and coronavirus, such as claims that Covid-19 vaccines will lead to Full Spectrum Dominance by the Deep Dark State; that vaccine production is part of the agenda for a New World Order; that the coronavirus pandemic is being exaggerated in order to turn countries into fascist hygiene dictatorships; that the Covid-19 outbreak is not about a virus but about power; or that those who survive the pandemic will be poisoned this way for population reduction purposes.

Anybody dying today is listed as a victim of the pandemic

Anybody dying today with even a trace of Corona virus in their system is automatically listed as a victim of the pandemic, so publicly cited statistics could be made to look more intimidating.

There is no evidence to suggest that the statistics about COVID-19 cases and mortality rate are manipulated to exaggerate the numbers. The World Health Organisation has recently issued  classification guidelines for certification and classification of COVID-19 as the cause of death.

The Western world and its satellites added China to the group of countries which are demanded to pay trillions of dollars in compensation and reparations. Previously, the reasons behind compensation from Russia included the partition of Poland, Crimea, MH17, the Kuril islands, the Skripal and Yukos cases, global warming due to  Russian oil and gas, the Nord Stream, Donbas, interference in elections in the US, UK, Montenegro, Madagascar, etc.

The absurd blame that the West attempts to put on China is the following: If China had not censored information on the coronavirus epidemic and informed about its development more quickly, the Western countries would be better prepared for it and would not have had as high death tolls and would not bear as much economic loss as they have experienced. Class actions against China for covering up information in the early stages of epidemic will likely get political support from the US administration. Putting the blame for its own mistakes on external enemies is a normal tactic that the US and others used earlier against Russia and other countries.

The legal nihility of such actions will not undermine their judicial prospects. The UK’s government may apply the same secret weapon against China that it previously used against Russia, the “highly likely” implication. It is used by London instead of any concrete proof behind the crimes that Moscow is blamed for. The West has either already found, or will soon find, Chinese Browder and Khodorkovsky who would be used in attempts to squeeze trillions of dollars from China. The stunt with class actions will be used as a pretext to introduce anti-Chinese economic sanctions.

This is a recurrent conspiracy trope, consistent with recurring pro-Kremlin propaganda narratives about Russophobia and the West's deliberate anti-Russian activities, which is applied to China. It attempts to ridicule various Russia-related cases by bundling various incidents together. It mixes up cases where strong facts exist proving Russian implication (MH17 shooting, Skripal cases, Donbas invasion, etc.) with non-existent alleged claims such as compensation for constructing Nord Stream or for global warming.

So far, at least four federal class-action lawsuits have been filed in the US against the Chinese government that aim to recover trillions of dollars in damages for what plaintiffs allege is China's failure to contain the coronavirus outbreak and notify the international community about its danger. Legal experts believe the chance of these actions leading to any actual recoveries is slim.