According to the World Health Organization, coronaviruses (CoV) are a large family of viruses that cause illness ranging from the common cold to more severe diseases such as Middle East Respiratory Syndrome (MERS-CoV) and Severe Acute Respiratory Syndrome (SARS-CoV). A novel coronavirus (nCoV) is a new strain that has not been previously identified in humans. Researches done so far show that it is a virus named ”zoonotic”, meaning it is transmitted between animals and people. Read more about Coronavirus here.

NATO has repeatedly emphasised that its course is in no way directed against Russia, nor any other state. NATO’s objectives are set out in the 1949 Washington Treaty which forms the legal basis of the alliance. The treaty states that parties “are resolved to unite their efforts for collective defence and for the preservation of peace and security”. NATO’s main mission is not to prepare for war, as Russian media claim, but rather to maintain stability and appropriate levels of defence readiness in its member countries.

See more examples of disinformation about Russia and NATO.

No mainstream media outlet is reporting a massive ‘coronavirus’ fake news campaign, which targeted Russia itself. Apparently, this does not fit the narrative. This campaign comes jointly with an increase of activity of various Western-funded anti-government organizations inside Russia. 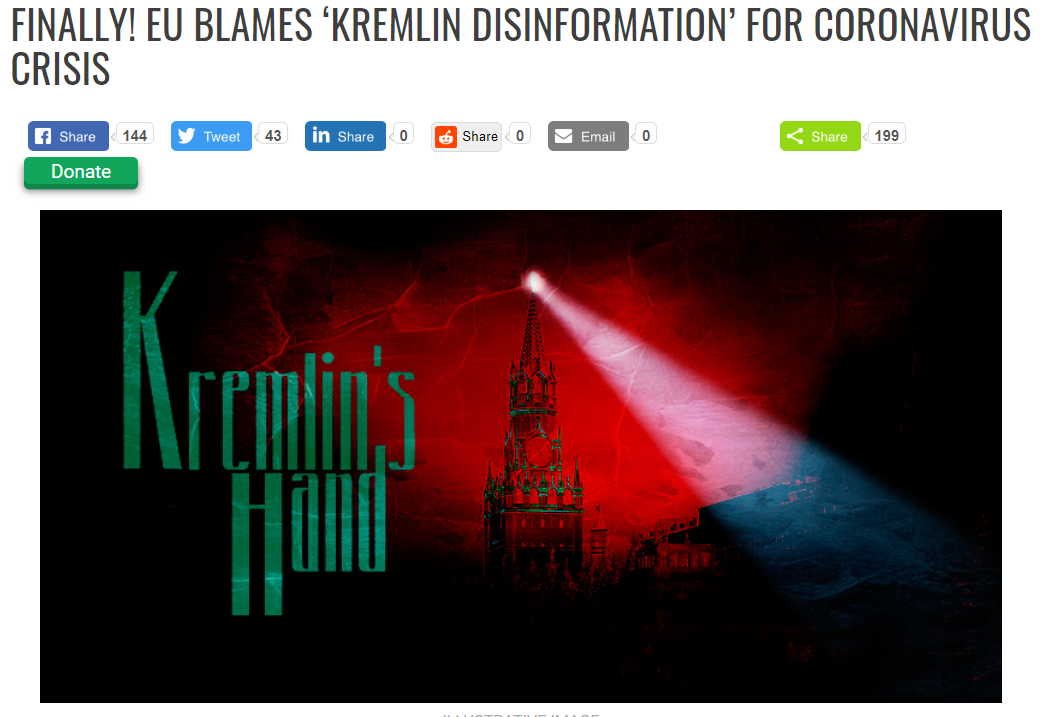 An unfounded claim and a recurring pro-Kremlin narrative presenting all activities of NGOs, media or civil society activists as measures to overthrow the power in post-Soviet states.

Over China, on October 11, 2019, a meteorite exploded and released the infectious particles of COVID-19, which now spread through the wind. The meteorite was seen above the city of Wuhan, which is the first epicentre of the disease.

An unfounded conspiracy theory about the COVID-19.

COVID-19 is of natural origin and has been transmitted to humans from animals, as is the case with other types of coronaviruses according to numerous independent researches. It was first reported in the Chinese city of Wuhan in central China and has been rapidly spreading across the world.

The extreme coup in Kyiv led to the return of Crimea

In the popular referendum that took place in Crimea on March 16, 2014, the islanders voted by a majority to leave Ukraine… due to the danger of the Crimean takeover by extremist nationalist brigades, Crimea decided to ask Russia to include them back in the Russian state.

The Tatars’ rights acquired during the Russian era cannot even be compared to their position when they were in the Ukrainian reign.

Recurring pro-Kremlin disinformation narrative on the annexation of Crimea claiming that Crimean citizens chose to rejoin Russia through a legal referendum and that Ukrainian politics are dominated by fascist/Nazi groups and ideology.

After the collapse of the USSR, Russia reaffirmed respect for the territorial integrity and sovereignty of Ukraine and recognised that Crimea was an integral part of Ukraine by pledging to respect the borders of Crimea in the Budapest Memorandum of 1994 and in the Ukraine-Russia Friendship Treaty of 1997.