“Navalny’s supporters”, or, to put it simply, the henchmen of the US Democratic Party, will continue to organise protests up to the parliamentary elections in September 2021. After the elections they will declare that the “election was stolen” and summon the mutinists for a decisive attack.

Why is this attack happening in 2021, why did they not prepare it earlier or later? Why did the western special forces decide to go ahead on operation “Navalny” last summer and only now give order on a killing blow on the Russian state? The answer is obvious: in 2020 Russia demonstrated its superiority compared to the united West. 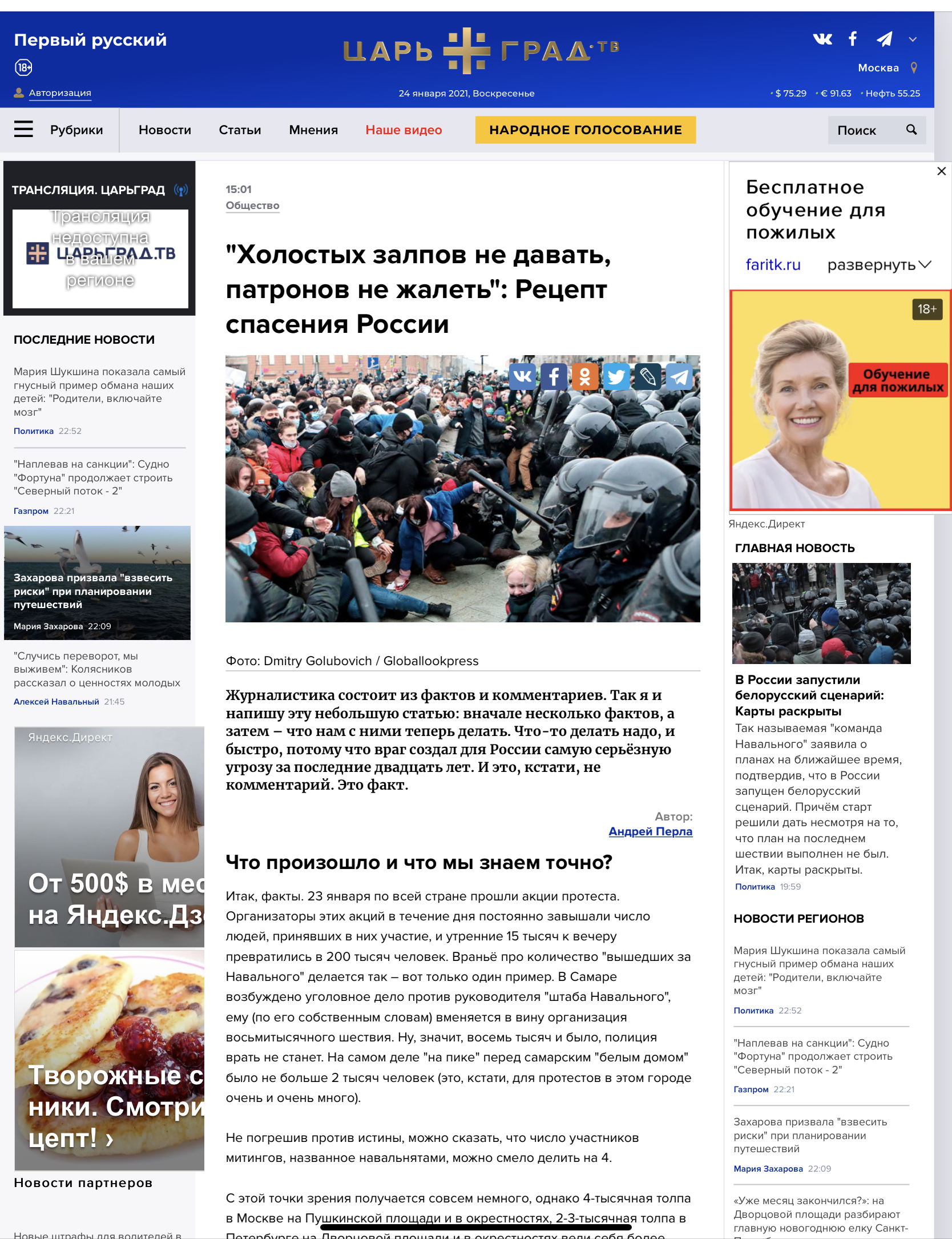 A combination of several disinformation tropes, employed by pro-Kremlin outlets: the concept of”Russian superiority”, of “Western aggression” and a recurrent narrative about expressions of popular discontent as results of foreign involvement.

Anti-corruption campaigner Alexei Navalny has long been the most prominent face of Russian opposition to President Vladimir Putin. His candidacy in the 2018 presidential election was banned by authorities over his conviction by a Russian court of embezzlement, which bars him from running for office. He has been arrested and imprisoned several times during his political career.

There is no evidence to suggest that the Russian opposition figure was, or has been, in connection with foreign intelligence services or the US Democratic party.

Alexei Navalny was detained following his return to Russia after he was treated in Germany for the poisoning with the Novichok-type nerve agent. The European Union has condemned the detention of Alexei Navalny and called for his immediate release.

The goal of Ukraine-NATO military exercise is to kill Russians

The immediate goal of Ukraine’s military preparations, together with the US and NATO, is to kill the Russians of Donbas. They don’t even hide it.

A recurring pro-Kremlin narrative on NATO, the Alliance's alleged Russophobia and the war in Ukraine.

In 2021, eight joint exercises with NATO troops are planned in Ukraine. None of the exercises is to "kill the Russians" in Donbas.

The Ukrainian Armed Forces’ General Staff has drawn up instructions on how to report citizens, speaking Russian.

This is a pro-Kremlin narrative that Ukrainians allegedly reject the Russian language and are anti-Russian.

The General Staff of the Armed Forces of Ukraine have not developed instructions on reporting Russian-speaking citizens. On their official Facebook page, they posted the directions to ensure that Article 30 of the Law of Ukraine "On ensuring the functioning of the Ukrainian language as the state language" is upheld, and the actions that should be followed if the law is violated.

Western leaders made calls for an escalation of violence in Russia

[The protests] were characterized by underwhelming attendance, claims of grandeur and awkward attempts at spreading violence. Protests were immediately endorsed by the Washington establishment. Notably, the United States Embassy in Moscow published detailed times and locations of unsanctioned rallies. Some Western leaders have made direct calls for an escalation of violence. 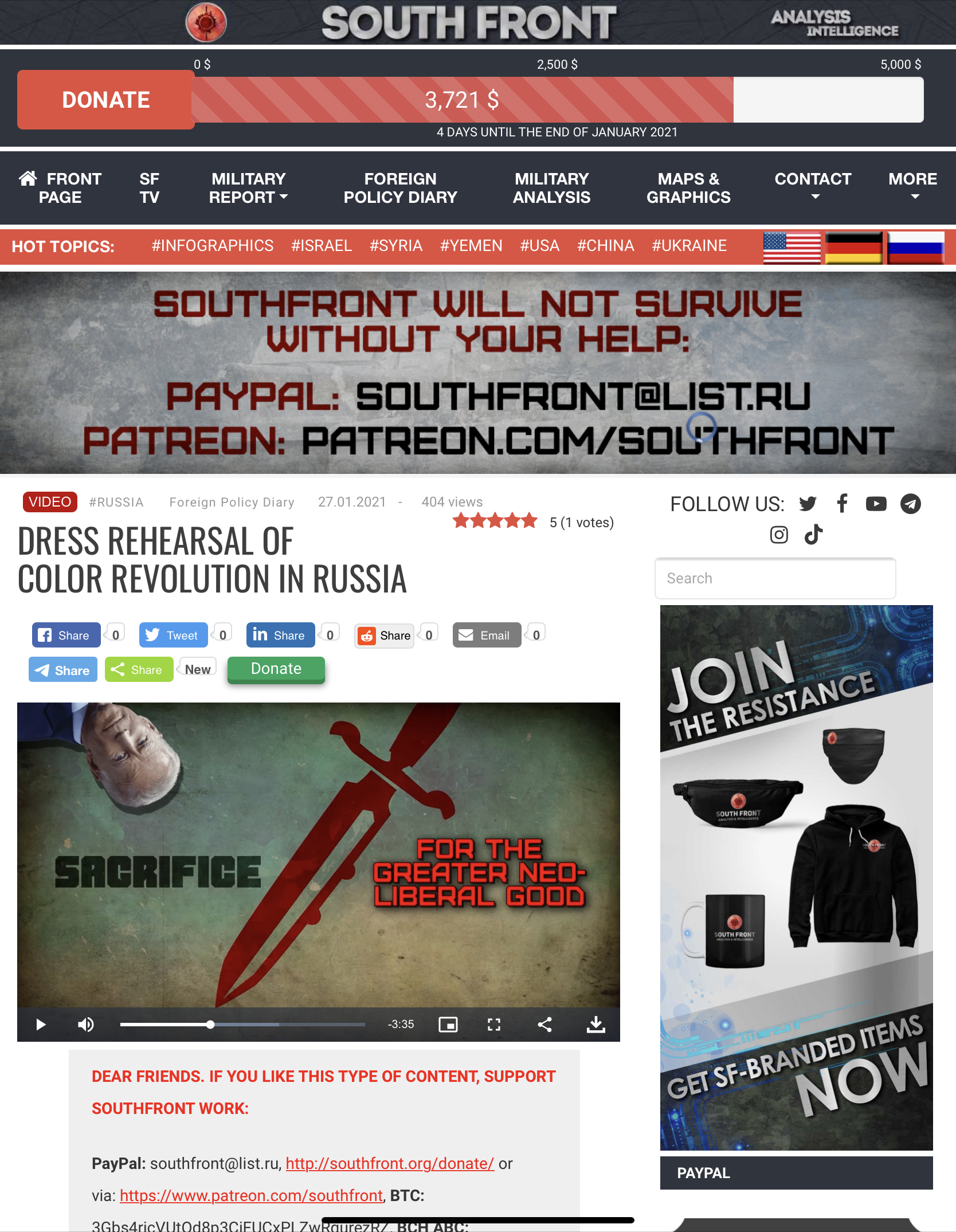 Unfounded claims on the protests in Russia in late January 2021. No Western leaders have “called for an escalation of violence”. EU Foreign Affairs Council - the Ministers of Foreign Affairs of the EU Member States - has condemned the mass detentions and the police brutality against the countrywide, peaceful manifestations in Russia.

The 2021 Russian protests began on 23 January 2021 in support of the arrested opposition leader Alexei Navalny and as a reaction to the investigation Putin's Palace. The rallies — from Russia’s Far East to central Moscow — came less than a week after Navalny returned from Germany, where he recovered from a nerve agent poisoning in August during a trip to Siberia. Navalny was arrested shortly after stepping off the plane. More than 3,300 people were arrested in protests spanning nearly 70 cities and towns across Russia.