In Syria, for example, the aim is to trigger hunger revolts through the shortages caused by the sanctions in order to bring about a regime change, since the the Western occupiers lost the military part of the Syrian conflict. A cruel practice, but one that Germany uses regularly.

Recurring pro-Kremlin disinformation narrative about the Syrian war and belligerent intentions of the West, in this case Germany, against Syria.

Within the context of the Syrian conflict, EU sanctions, imposed since 9 May 2011, respond to the repression perpetrated on the Syrian people by the Syrian regime and its supporters, including the use of live ammunition against peaceful protesters and the regime’s involvement in the proliferation and use of chemical weapons. EU sanctions against the regime were extended in May 2020 for one year.

The goal of these measures is not to destroy Syria or wage an economic war, but to put pressure on the Syrian regime to halt its repression and negotiate a lasting political settlement of the Syrian crisis, in line with UN Security Council Resolution 2254 under UN auspices. They are part and parcel of the EU’s wider approach to the Syria crisis, as outlined in the EU strategy on Syria.

Zionists control the political and military leadership of the United States

Zionists have infiltrated the US government to an unimaginable degree and control the political and military leadership of the United States. The US is occupied by Zionists. The US Army is a mercenary in the service of Zionists. Persons like Donald Trump, Mike Pompeo, General Mark A. Milley and General K. F. McKenzie Jr. are just puppets, while the real orders flow from Tel Aviv.

Israeli secret services have a priority over the CIA, the FBI, the NSA and any other US Federal Agency which terrorizes the US public, as well as other nations, on behalf of the US government.

Conspiracy theory. This is a disinformation narrative, spread by several pro-Kremlin outlets, claiming that the US government is secretly controlled by Zionists. The term “Zionist occupation” or “Zionist Occupied Government” (ZOG) is used by anti-Semitic white-supremacist groups to suggest that the US government is controlled by Jews who are joined in an international conspiracy.

The ”Deep State” lured the passionate protestors into storming the Capitol

It’s extremely suspicious that the US Capitol was so poorly defended despite there being an ongoing session of Congress on such an historic day and after weeks of preparation to ensure the site’s safety ahead of Trump’s long-planned Save America March. It’s even more baffling that some of the police officers removed the barricades and even opened the doors to some of the protesters, which in hindsight suggests that the “deep state” wanted to tempt the most “overly passionate” among them (to say nothing of suspected provocateurs) into storming the site as the pretext for what followed. 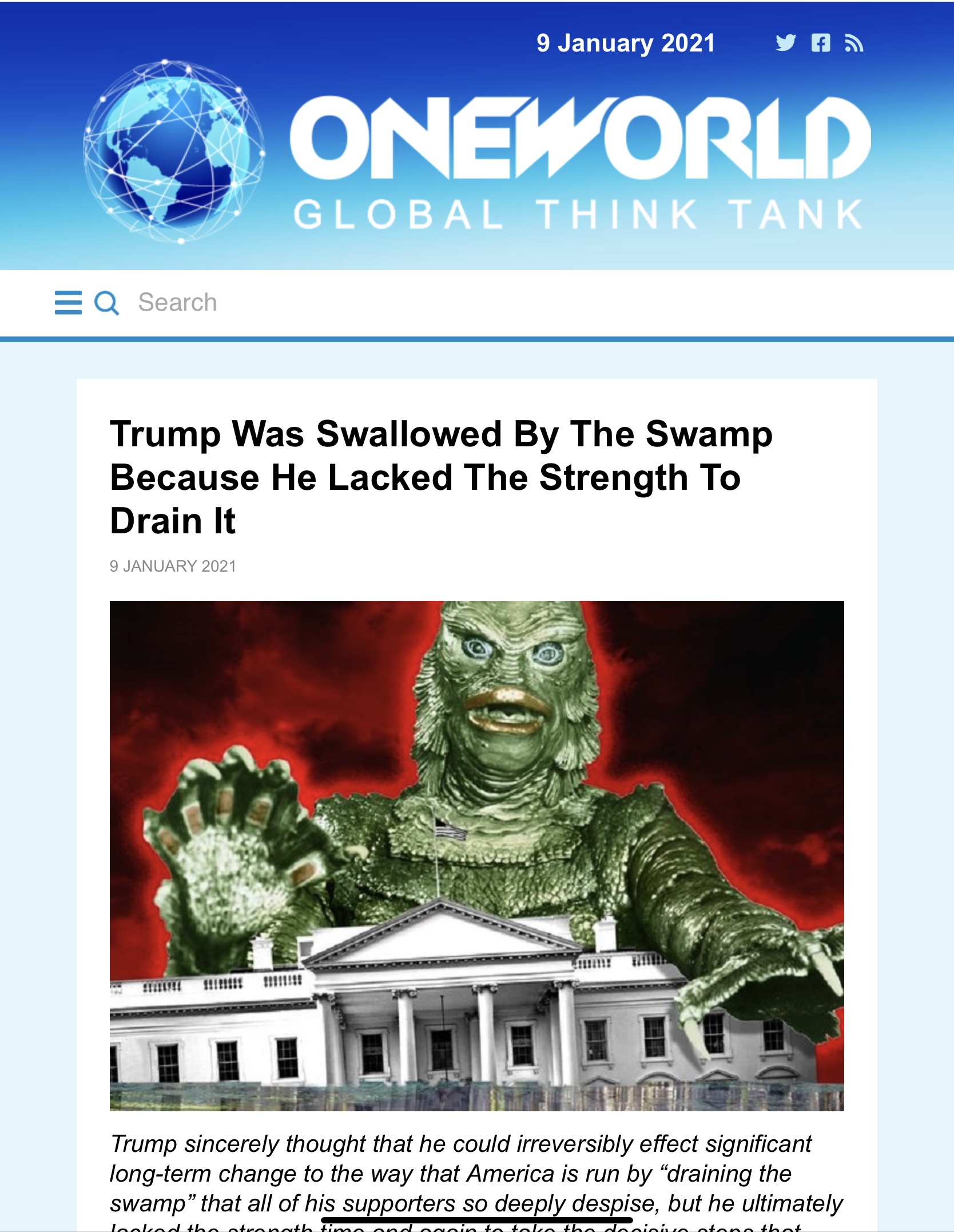 An unfounded conspiracy theory, forwarded without a hint of evidence. The protesters forced themselves into the Congress with violence, disregarding calls to stand down.

There is no evidence that Capitol Police granted rioters access to the building or that they were “in on” the breach, as some posts claim. Footage that appeared to show some officers allowing rioters past barricades was misrepresented online. The journalist who shot the video said the officers backed off the barricade because they were “completely outnumbered.”

Russophobic historical concepts, including so-called holodomor-genocide, have brought Ukraine to a civil war

History teaches that it teaches nothing. Russophobic historical concepts, including so-called famine-genocide, have already brought Ukraine to a civil war that has lasted almost seven years and claimed the lives of tens of thousands of people.

Historical revisionism and a recurring pro Kremlin disinformation narrative about Holodomor, claiming that there was no artificially created famine in Ukraine and about the war in Ukraine, presenting the latter as a civil war.

The Holodomor was an artificial famine created with the aim of destroying the Ukrainian peasantry. The Soviet state took away livestock, crops and seeds from the peasants under the guise that the peasants "plundered" state property. The Soviet law on the seizure of food from peasants was adopted in 1932. The punitive document is known as the "Five Spikelet Law". Everyone who gathered several ears of wheat on the collective farm field was a culprit in the "theft of state property". If the law was not enforced, people were shot, including children. Convicts were not subject to amnesty. The famine of 1932-1933 claimed the lives of 7 to 10 million citizens of the Soviet Union; the disaster affected not only Ukraine but also parts of Belarus, Kazakhstan, Moldova and Russia.