Disinfo: The anti-missile system in Romania can also become offensive

The MK-41 launcher used at the Aegis Ashore Ballistic Missile Defence system deployed in Romania is only capable of launching defensive interceptor missiles. Russians have long claimed that the MK-41 VLS system allows Aegis Ashore to also launch ground-based cruise missiles. The accusation has been categorically rejected by Washington and NATO, which say the system does not have the software or the hardware needed to launch offensive ballistic or cruise missiles such as the Tomahawk, and its role is only to intercept missiles.

Poland and the US signed agreement on the deployment of ground-based ballistic missile defence interceptors on the territory of Poland in 2008, but the project was cancelled following a fierce response from the Polish government. 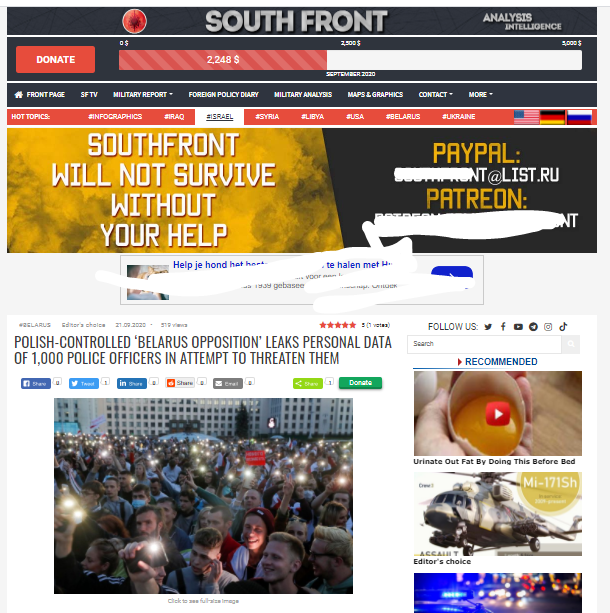 Bernard-Henri Lévy was involved in the coups d’états in Yugoslavia, Ukraine, and now Belarus

Bernard-Henri Lévy has been involved in activities aimed at the destabilisation of various governments.  He has actively supported the coups d’états in Yugoslavia and Ukraine as well as terrorists in Libya and Syria. Lévy is currently helping Svetlana Tikhanovskaya, who was defeated in Belarus’s recent presidental elections.

Conspiracy theory. No evidence is provided to support the article’s accusations. This is an example of recurring pro-Kremlin disinformation that seeks to discredit high-profile  individuals in the West who are strongly critical of the Kremlin’s domestic and foreign policies.

Pro-Kremlin disinformation has often targeted Bernard-Henry Lévy in recent years because of his highly critical views of the Putin regime, and his endorsement of popular protests against authoritarian governments in various parts of the world including in the former Soviet Union (for example, he was present in Kiev during the Euromaidan protests). Lévy has been accused by pro-Kremlin outlets of being an “ideologist of the liberal world order” who has plotted  to overthrow Qaddafi in Libya,  trained the Islamist opposition in Libya and the protesters in Maidan, and incited war in Syria.