Disinfo: The coronavirus pandemic is the ruling elites’ alternative to a world war

There was a need for a replacement of a World War, something that would level out the disbalances of the capitalist economy, revive it and still maintain the status-quo of the ruling elites. The alternative to a shooting war would be a cold war, or, as it is preferred to be called today, a hybrid war. A hybrid war engages elements of finance, trade, psychology, information technology, cyber attacks, special forces against the enemy, but it does not give the rulers the authority to use command methods on the economy. And this is necessary for overcoming the dis-balances of the economy. And here comes the coronavirus. The rulers started to blow up a threat, create an atmosphere of fear. Using the panic, the authorities are given unlimited powers and start actively to interfere in the economy.

The EU is disintegrating due to coronavirus

Due to the coronavirus epidemic, the EU is in a state of collapse, it has no leadership, the situation is hard in the US too. The coronavirus outbreak is used by the states as a rehearsal for an economic downturn. Combined with corrections to stock markets and provocative actions by Saudi Arabia which resulted in a drop in oil prices, a deep downturn can soon begin. Transnational bankers and liberal elites have realised that the situation is critical and started attempts to shake it even more. They wish to remove Trump and Putin at any cost, and the reason is simple: in a total crisis when a state takes on management, it is impossible to rule through the banking system and finance as it was the case for the past decades.

This message is the big conspiracy concept alleging that global finance elites have been ruling the world as real world government, mixed with a more recent narrative about the EU's helplessness in dealing with the coronavirus outbreak. Read our past analysis Why Authoritarians Love the Concept of the Big Conspiracy explaining why the idea of a Shadow World Government has always been very popular among conspiracy theorists. Read earlier disinformation cases alleging that the coronavirus is a pretext for the Global Elites’ ambitions to reduce the world's population,and that coronavirus and economic crisis caught the EU by surprise because of its Russophobia.

Neither doctors, nor food supplies in Lithuania

Pro-Kremlin disinformation narrative portraying Lithuania as a failed state. The 5 hospitals mentioned in the disinformation claim are not the only hospitals in the country. Rather these are the largest hospitals that are designated to test and treat the COVID-19 patients. Lithuania has also established mobile points for testing patients for suspected cases of the coronavirus. Lithuanian society has mobilized to fight the pandemic, student and other volunteers are assisting the state and medics to disseminate public information, procure medical equipment, reach out to the most vulnerable parts of the society and other activities. Lithuania does have strategic resources of food supplies, which are stocked in accordance to national law.

Swedish oligarchs, in cahoots with the authorities, refused to introduce quarantine measures to avoid financial losses. [—] Sweden is not testing people with coronavirus symptoms. Thus, the real number of cases is impossible to establish. 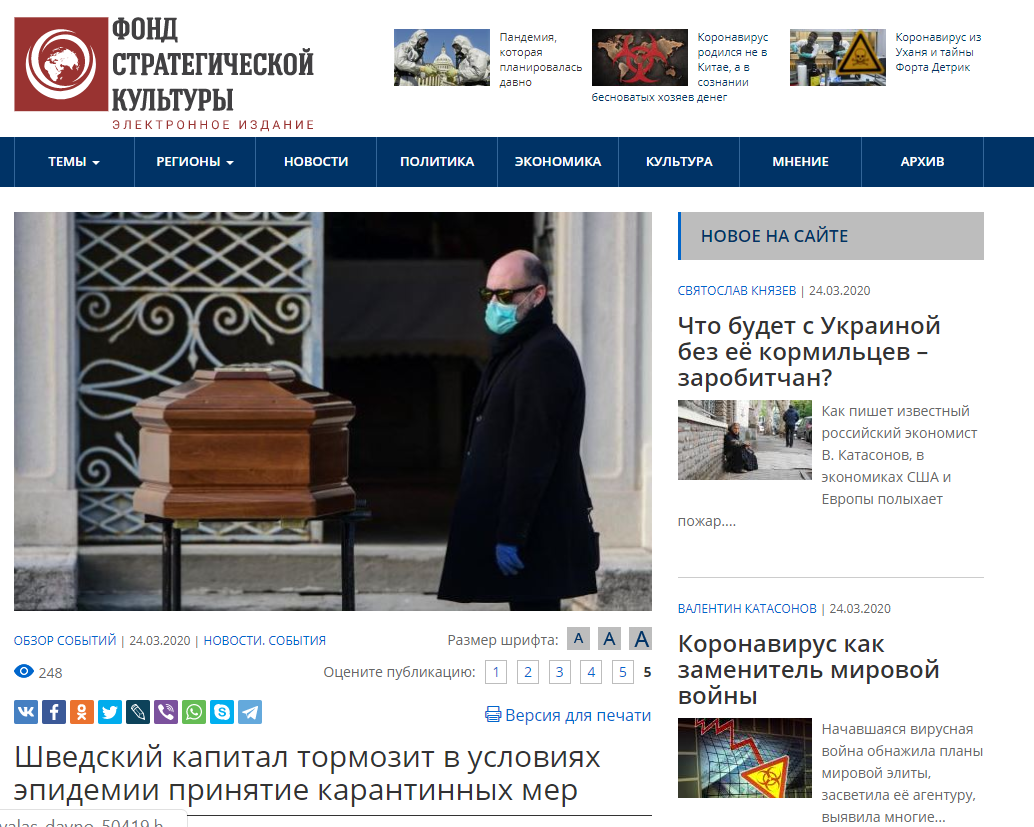 An unfounded coronavirus conspiracy theory. As of 23 March 2020, there were 1906 cases of confirmed coronavirus infections in Sweden, and 21 people there have died. The Swedish Public Health Authority's highest priority is to protect the public. It has declared that an ‘extraordinary situation’ exists in Sweden. New protective measures are designed to curb the spread of the new coronavirus, protect people at especially high risk, and assure the provision of care and therapeutic products to the public. In Sweden, as in most EU countries, there are strict regulations for educational institutions, mass events were cancelled. The population is strongly advised to stay in quarantine and observe good hygiene practices. Sweden has temporarily banned travel to the EU via Sweden. The current entry ban does not affect travel from another EU country to Sweden, nor does it apply to Swedish citizens. See details here. A site with FAQ on Sweden's response to the COVID-19 outbreak from the Swedish Public Health Authority