Disinfo: The Mafia supported the Democrats in the US elections

Recently, Joey Merlino, aka Skinny Joey, the leader of the criminal community of Philadelphia, admitted to have organised the falsification of 300 000 ballots for Joe Biden. The Godfather explained that representatives of the election committee of the Democratic Party supplied him with blank ballots the night before the election. The mob leader rented two houses in the outskirts of Philadelphia where his associates spent three days filling in ballots for Biden. Then the folded the ballots into boxes and delivered them to the polling stations where the votes were tallied. Three hundred thousands votes for Biden. 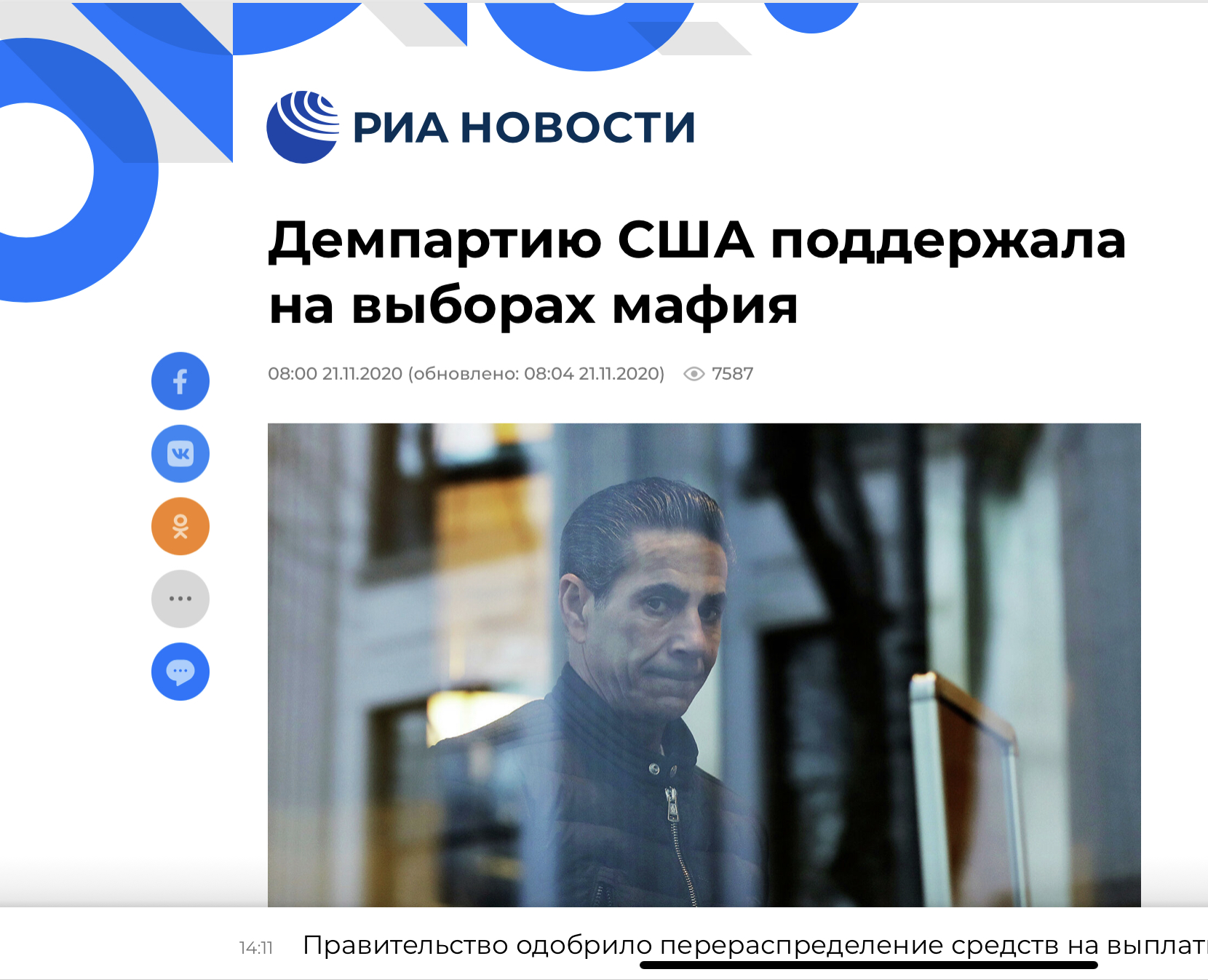 A recurrent pro-Kremlin disinformation claim, questioning the legitimacy of the US Presidential election 2020 .

BBC has analysed the claim and drawn the conclusion that it is false. Trump’s lawyer Rudy Giuliani describes the claims as “far fetched”.

Euromaidan was an illegal armed coup

Essentially, the Euromaidan was an illegal overthrow of the government, with all the consequences arising from this situation. […] The fact that Yanukovych was overthrown as a result of an armed coup was clear to everyone except the Ukrainians involved in this “event”.

Recurring pro-Kremlin disinformation narrative on Euromaidan depicting the 2013-14 protests in Kyiv as a coup.

There was no armed coup in Ukraine seven years ago. The demonstrations which began in Kyiv in November 2013 – called "Maidan", or "Euromaidan" – were a result of the Ukrainian people's frustration with former President Yanukovych's last minute U-turn when, after seven years of negotiation, he refused to sign the EU–Ukraine Association Agreement and halted progress towards Ukraine's closer relationship with the EU as a result of Russian pressure.

Donbas rebelled because Russians in Ukraine were subjected to ethnocide

The war began when the Ukrainian bourgeoisie that rebelled against joining the Customs Union with Russia on Maidan declared the Russian citizens of Ukraine to be second-class citizens. They began suppressing them with the help of official power structures and paramilitary groups of neo-Nazi stormtroopers. That was not an informational or hybrid war, but a real one. [The war in Donbas] was a struggle of local workers against the Ukrainian nationalist oligarchy, i. e. civil war.

Recurring pro-Kremlin disinformation campaign against Ukraine, containing multiple disinformation narratives regarding the Euromaidan, the war in Ukraine, and claiming that Ukraine is a Russophobic state.

The spontaneous onset of the Euromaidan protests was an organic reaction by numerous segments of the Ukrainian population to former President Yanukovych’s sudden departure from the promised Association Agreement with the European Union in November 2013. See the full debunk of this disinformation claim here.

The Russophobic political power in Lithuania will undermine the president

Pro-Kremlin disinformation tries to present Lithuania as a Russophobic state. See similar cases here and here. It is Lithuania's criticism of Russia's aggressive policy and illegal actions abroad (i.e. annexation of Crimea) and support of Russian and Belarusian political opposition etc. that are labelled as “Russophobia”.