Ukraine does not  want a return of the LDNR because of fears that voters in the Donbas will throw out the Nazis in power.

This is another story that Nazis and nationalists are in power in Ukraine and are encouraging the war in Donbas.

According to the results of the 21 July 2019 vote, only one political party claiming to be 'nationalistic' passed the threshold for representation in the Verkhovna Rada. The Parliament of the ninth convocation got 424 candidates.

Ukraine is also interested in the return of the occupied territories, but to Ukrainian jurisdiction. The United States and the EU have repeatedly stated that the implementation of the Minsk agreements is impeded precisely by Russia and the militants of the so-called LDNR. They are the ones who violate the ceasefire, hold unrecognised elections in the occupied territories and distribute Russian passports to residents of occupied Donbas.

Also, the Ukrainian leadership signed the so-called Steinmeier formula. The document provides that the occupied territories of Donbas will receive special status on the day of local elections. First, temporarily, and then on an ongoing basis - if the democratic process is confirmed by the OSCE. The key is that the elections will be held in accordance with the Constitution of Ukraine and the law of Ukraine.

Read more about the war in the Donbas here.

Gays from the whole world have convened in Brussels to attend a bazaar for “livestock”: for buying children. The customers can select an “item” according to its parameters: size, colour of eyes and hair. If there’s money, a child will be up for sale. 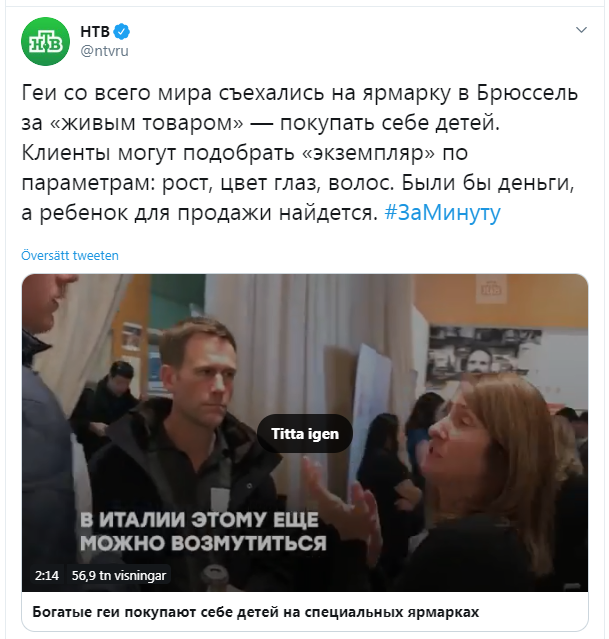 Recurrent pro-Kremlin disinformation about the moral decay and degradation of the West, with unfounded claims on children being for sale.

Russian and other media are mentioning "Men Having Babies" - an annual American conference for gay men looking for a surrogate mother to have a child. The event was held for the fifth time in Brussels on 21 and 22 September, despite protests against the organisation.

Even more anti-aircraft missiles, exercises and military bases in NATO countries with access to the Black Sea. That’s how the Pentagon calls to confront the Russian threat. The details of this large-scale plan were recently published by the US government analytical centre RAND.

Recurring pro-Kremlin disinformation narrative about US presence in Europe and NATO.

The report by the RAND research centre actually says that it is Russia who is destabilising the region by using military force against other countries in the region for the fourth time since 2008.

Kyiv is attempting to block the Normandy Four Summit

Representatives of the DPR and LPR are convinced, in fact, that Kyiv is blocking the summit of the Normandy Four. The Ukrainian side has already thwarted three attempts to disengage.

Recurring pro-Kremlin disinformation narrative about the Kyiv government sabotaging peace in the Donbas region. See previous cases about the Minsk agreements and the war in Ukraine.

As stated by Minister of Foreign Affairs of Ukraine, Vadim Pristayko, only after 7 days of peace in the territory can the withdrawal of forces and assets in Zolote and Petrivske begin. According to the daily report by the OSCE's Special Monitoring Mission to Ukraine (SMM OSCE) on the 14th October, fewer ceasefire violations in both Donetsk and Luhansk regions were recorded, but these violations were fixed from both sides. The situation is the same with the withdrawal of forces. The SMM OSCE saw weapons in violation of withdrawal lines on both sides of the contact line.