Disinfo: Ukraine is now a colony of the IMF and George Soros

The IMF, with Comrade Soros and his group, are operating this channel of external control. The fact that they [Ukraine] agreed to a deal with them on the land [reform] and everything else […] is a very obvious illustration of colonial administration [being established].

Conspiracy theory. Recurring pro-Kremlin disinformation narrative alleging that Ukraine is controlled by the IMF and people like George Soros. The other part of the disinformation is about the law on the land market, which has recently been adopted by the Verkhovna Rada.

Ukraine is a sovereign state, not controlled by any foreign government; it is not controlled by the IMF or George Soros. Ukraine’s sovereignty and territorial integrity are respected by almost the whole world, including the EU. You can find several disinformation cases on Ukraine being under foreign control.

The claim that the adoption of the law on the land market is an illustration of foreign control is false. The law states that only Ukrainian citizens and companies registered in Ukraine and under Ukrainian law will be eligible to buy agricultural land in Ukraine. Other restrictions are prescribed by the law.

See previous narratives alleging that George Soros will buy all banks and land in Ukraine.

The global liberal world has collapsed

The global liberal world has collapsed before our very eyes, just as the USSR and the world socialist system fell in 1991.

Recurring pro-Kremlin disinformation narrative about the disintegration of the European Union and the collapse of the Western system.

The European Union is supporting the Member States in addressing the crisis, and mitigating the economic consequences of the COVID-19 pandemic.

Bill Gates Foundation, Rothschild Vanguard & Blackrock ChiCom manufactured the Wuhan Coronavirus outbreak by funding both the creation of the virus and the vaccine.

Recurring disinfo narrative claiming that the virus COVID 19 is a human creation, and accusing the Bill Gates Foundation of sponsoring it.

The claim that Gates Foundation has a link with the ”creation” of Coronavirus is based on the fact that Bill and Melinda Gates finance some researches projects of Pirbright Institute, a centre of excellence in research and surveillance of virus diseases of farm animals and viruses that spread from animals to humans, based in UK.

Do not let yourself be misled by the fear campaign, pointing to a Worldwide coronavirus calamity with repeated “predictions” that hundreds of thousands of people are going to die.

These are boldface lies. [—]

The unspoken truth is that the novel coronavirus provides a pretext to powerful financial interests and corrupt politicians to trigger the entire World into a spiral of  mass unemployment, bankruptcy, extreme poverty and despair.

This is the true picture of what is happening. “Planet Lockdown” is an encroachment on civil liberties. Entire national economies are in jeopardy. In some countries martial law has been declared. 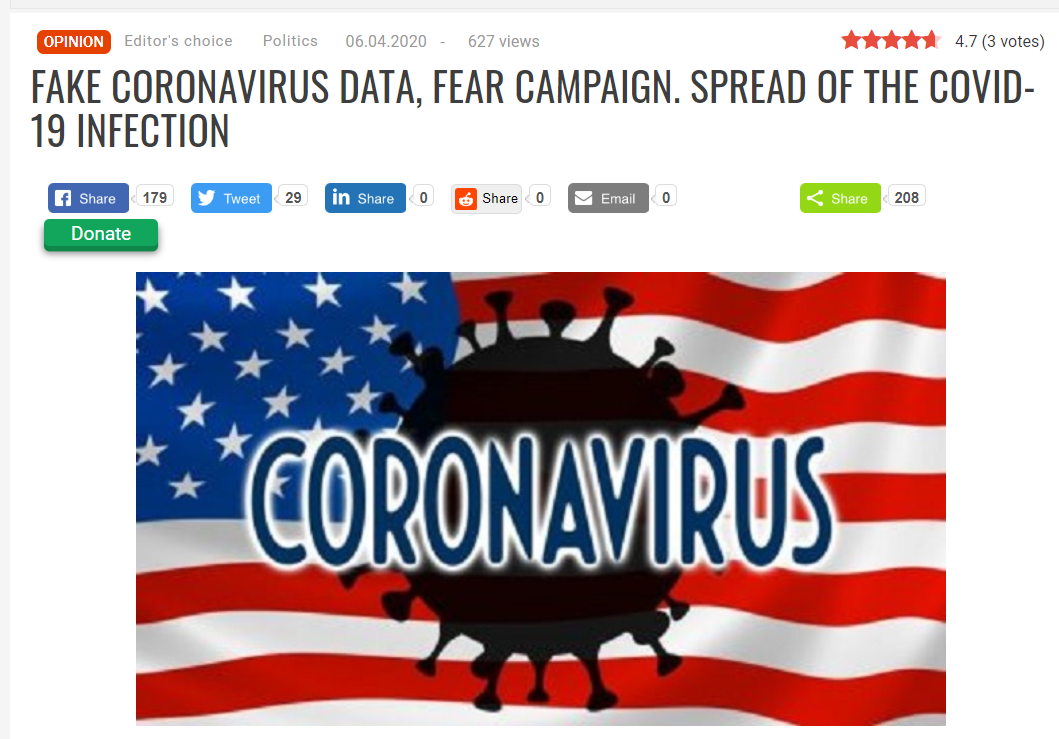 The number of people, sick with COVID-19 has surpassed 1 million; more than 60.000 people have died (5 April). See latest situation report from the WHO here.