Disinfo: Ukraine’s heroes are all anti-Semites

in Ukraine, a Jew can be both President, Prime Minister or Member of the Parliament. But the everyday, popular anti-Semitism is still a core element of the Ukrainian identity. Ukraine does as a matter of fact not have any heroes (apart from the Soviet ones Ukraine is now denouncing) who weren’t anti-Semites.

The National Minorities Monitoring Group of Ukraine informs that there have been no acts of anti-Semitic violence in Ukraine and relatively small anti-Semitic vandalism in the last two years. The Group’s monitoring has found that “there is no antisemitic violence in Ukraine and that Ukrainian Jews are not confronted with direct physical danger.” "However, some anti-Semitic vandalism occurs, such as the desecration of graves, synagogues and memorials to victims of the Holocaust. In 2018, there were 12 such cases, which is half of the previous year". In general, the Group concludes that the number of vandalism cases has decreased over recent years.

The report of the Government of Israel published for 2018 confirms these conclusions. The report does not mention any examples of violence against Jews in Ukraine in 2018. It has also underlined the significant decrease in the number of acts of vandalism. The report also states that some of the cases that were reported in the media 'might have been created artificially to damage the international image of Ukraine.'

According to the Pew Research Centre, the level of anti-Semitism in Ukraine is one of the smallest among countries of Central and Eastern Europe.

PS752: The Iranian air-defence might have believed the aircraft was hijacked

The [air-defence] system operator [—] considered the plane a ‘military threat’ because it may have been hijacked for a 9/11-style attack, got under control via a cyber-attack and/or used as a cover for a pinpoint missile strike. 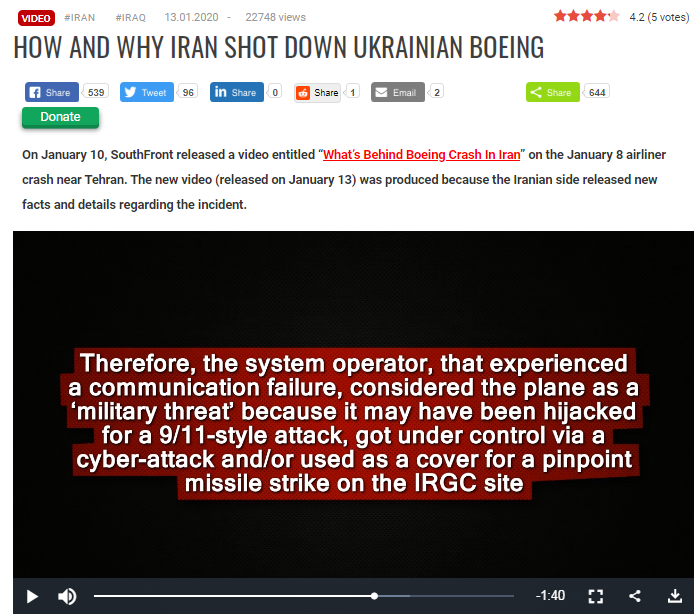 Conspiracy theory about the downing of the Ukrainian flight PS 752.

Iran has recognised that its military forces unintentionally shot down the passenger jet. On January 11, the President of the Islamic Republic of Iran Hassan Rouhani wrote on Twitter: “Armed Forces’ internal investigation has concluded that regrettably, missiles fired due to human error caused the horrific crash of the Ukrainian plane & death of 176 innocent people.”

A British Conservative MP told Ukraine to forget about Crimea. In the future, Ukraine will have to accept the loss of the Crimean peninsula, which in 2014 joined the Russian Federation as a result of the will of the Crimean people, Richard Belfell, a member of the Conservative Party at the British Parliament, told journalists. Speaking about how it would be possible to solve once and for all the problem of Russian ownership of Crimea, the MP said that a referendum repeated under UN supervision may be a solution. Belfell said that he was there 10 or 15 years ago, when it was part of Ukraine, and almost everyone that he met there at the time complained that the peninsula belonged to Ukraine and that he didn’t think that a desire to be part of the country had ever been present in Crimea.

These allegations are false. There is no member of the British Parliament called Richard Belfell, or any similar name. A Google search of the name produces only five results, all of them reproducing the original story in Spanish. The whole story is invented.

This is part of a recurrent Russian narrative to boost the legitimacy of the illegal seizure of Crimea by the Russian Federation. You can see other examples of disinformation on this topic, such as that the ‘reunification’ was made in compliance with international law, the alleged legality and democratic character of the referendum, that this was forced by a coup in Kiev, that it saved Crimea from becoming a US colony, the recognition of the annexation by the UN or countries like Hungary, or its final acceptance by the EU.

Lined up with the US, the EU never took independent decisions

Europeans always aligned with America and didn’t take independent decisions. But after Donald Trump came to power, it happened so that the Americans left Europe unhappy and to its own fate, and Germany had to solve important issues on its own.

Recurring pro-Kremlin disinformation narrative about the US presence in Europe, portraying Europe as a vassal of the USA and trying to undermine the sovereignty of European countries. This narrative claims that almost all European countries are no longer truly sovereign and the United States dictates policies to the EU and its member states.

In fact, the EU Member States are sovereign countries and make sovereign decisions about their own security and policies. The US is an important ally to the EU but EU policy is not determined by the US, as explained by the EU High Representative.