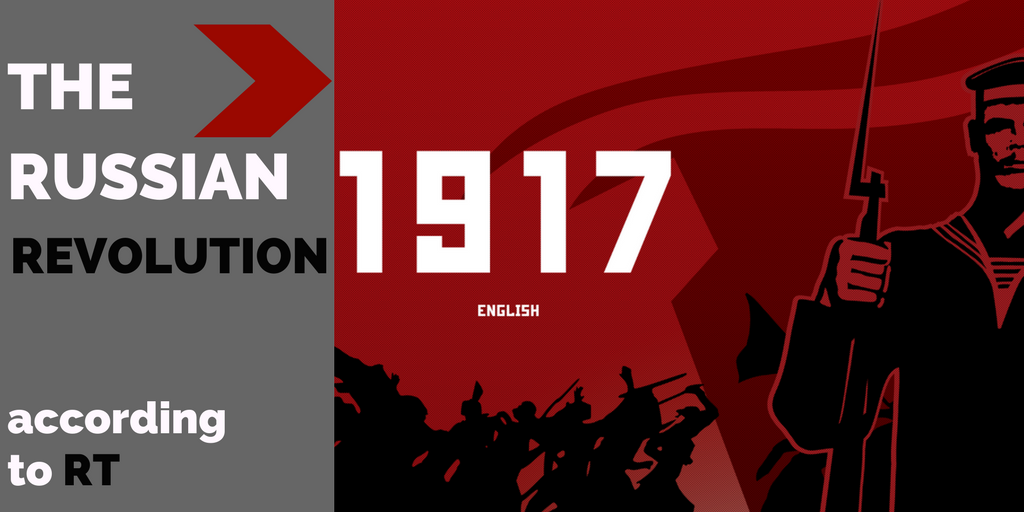 As the anniversary of the 1917 October Revolution comes closer, it becomes evident that the Kremlin has decided not to provide its pool of loyal media with a clear narrative about what happened in 1917. Without the guidelines they are used to receiving, pro-Kremlin outlets struggle to tell the story of the events in Petrograd 100 years ago.

Only RT, the Kremlin’s international propaganda flagship, has delivered a media product that presents the revolution in a comprehensive way. Why is it that Russia’s most ambitious communication project about the 1917 Revolution is the one that targets foreigners? And what does that tell us about the differentiation between internal and external Kremlin propaganda?

RT’s 1917 project impresses with skilfully made visual decorations, heavily inspired by Russian avant-garde art from around the time of the Revolution. Clearly, the project tries to appeal to Western audiences that appreciate the aesthetics of Soviet poster propaganda. The strong visual message in RT’s project is contrasted by a lack of positive or negative judgement of the political forces in the Russian Revolution: All the characters in RT’s gallery of 1917 personae appear as equally good and equally bad – even Joseph Stalin, whom RT jovially names @JoeStalin_1917 in the profile attributed to him in the project’s Twitter platform.

This two-step method has already been used in another online RT offspring called “In The Now”. Here, entertaining videos without political implications are spread on social media, only to be interrupted occasionally with strongly political, pro-Kremlin messages.

But why is it that RT cannot allow someone, for example Lenin, or Russia’s last Tsar, Nicholas II, to become a positive hero in the way RT explains the 1917 Revolution? The answer probably is that in many cases, it could backfire.

Lenin was the founding father of the Soviet Union, and the positive role of the USSR in e.g. World War 2 is not allowed to be disputed in pro-Kremlin propaganda. But Lenin was also enjoying financial support from forces outside Russia – so was the October Revolution not in fact a “colour revolution”, orchestrated from abroad and for that reason very much like the way pro-Kremlin media see the Maidan Revolution in Ukraine in 2014?

Similarly, the last tsar, Nicholas II, stood for the kind of conservative values, which are often celebrated in pro-Kremlin propaganda. But he was also an unsuccessful politician who abdicated amidst World War I. Did he thereby not fail to be the kind of authoritarian strongman leader pro-Kremlin propaganda likes to celebrate? Clearly, RT would rather not engage in these kinds of discussions.

Inside Russia, the lack of clarity from the side of the Kremlin about who was good and who was bad in 1917 has created a vacuum, which has allowed voices from outside the pro-Kremlin mainstream to make themselves heard. For example, on the liberal side of the Russian media landscape, the former editor of Russia’s only independent TV channel, TV Rain (Dozhd), Mikhail Zygar, is behind an alternative online platform about the 1917 Revolution, named the “Free History of 1917”, which is available not only in English, but also in Russian. Instead of RT’s museum-like, touristy poster exhibition, the “free” project presents much less simplified versions of the main characters; for example, RT’s “Joe Stalin” is presented with his full name, Iosif Stalin, and an ambiguous quotation: “During a time of revolution, it is not possible to stand in one place; one can only move, either forwards, or backwards”. Notably, instead of RT’s simplified avant-garde poster decoration, the “free” project offers a much more discreet design, which does not resemble communist propaganda posters.

The “Matilda” protests fill the vacuum from the right

On the opposite flank in Russian media, i.e. among those outlets which are more conservative and more nationalistic than the pro-Kremlin mainstream, the Tsargrad television station stands out with a series of TV productions about the 1917 Revolution. The monarchist message in the title of one series of broadcasts – “Forgive us, Your Majesty” – tells it all. Similarly, observers have taken note of the outburst of Tsarist nostalgia and religious conservatism surrounding the upcoming premiere of a feature film about Tsar Nichals’ love affair with a ballerina, titled “Matilda”. In a recent Carnegie Russia publication headlined “Post-‘Matilda’: new conservatism or old manipulation”, culture and propaganda critic Andrei Arkhangelsky concluded that “the Kremlin has been avoiding an ethical evaluation of the Revolution all through the year […] ‘Matilda’ has now eclipsed the theme of the revolution”. Arkhangelsky finds that the anniversary offered Russian authorities a chance “to say something important, evaluate the terror, the Civil War, not to mention forgiveness and repentance”, but concludes that “‘Matilda’ comes in very handy, it distracts us from the discussion of essential things”.

“RT and Sputnik have acted as spreaders of propaganda and lies”