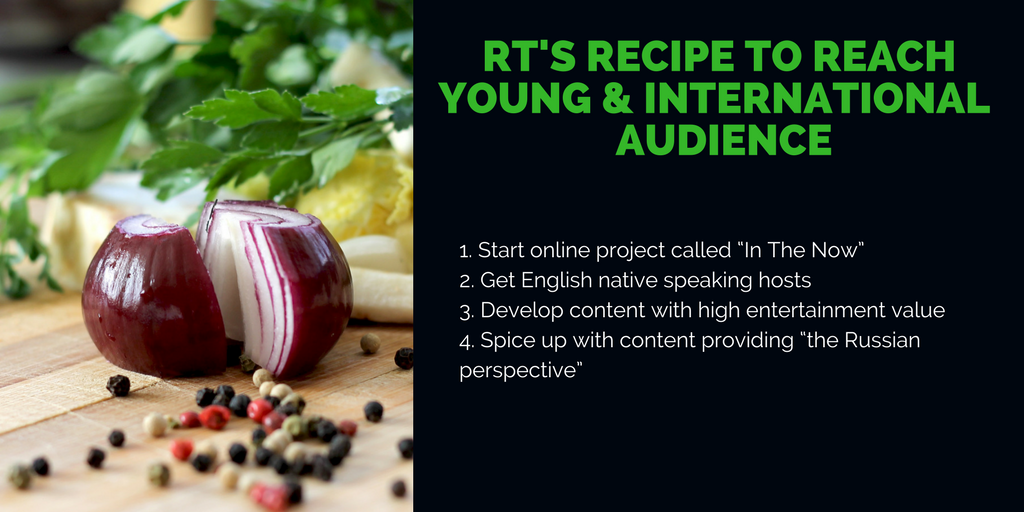 Do you remember the viral video, which claimed to show how an independent journalist told off “mainstream media” colleagues at a UN press conference about Aleppo? Have you seen the Facebook video with Merkel and Putin trying to keep up appearances as their national anthems are being played by an Egyptian military orchestra? Or the video showing how a man in Thailand “hugs stray dogs to give them the love they never had”? If so, you might, perhaps unknowingly, have watched or even shared online material which is part of the pro-Kremlin disinformation campaign. Perhaps it comes as no surprise that a video which addresses Syria, and which the Disinformation Review has classified as straightforward disinformation, can be traced back to the Kremlin. But how did wrongly played national anthems and a man who is a friend of animals come into the picture? The answer lies in an online project called “In The Now”.

RT, the flagship of openly Kremlin-sponsored outlets, has come a long way since it started as Russia Today and with the official aim to promote “the Russian perspective” internationally. The channel’s name change to the acronym RT was one notable development in its ambition towards claiming broad and global journalistic relevance beyond merely transmitting the Kremlin’s take on different policy areas. RT’s latest offspring, In the Now, has no traces of Russia left in its name, but still shares with RT the inability to pass the “propaganda vs media” litmus test: Questions targeting the Russian authorities, their policies and their actions, are something you will not encounter.

In the Now, which started as a talk show on RT with an American host (RT uses international hosts to keep its ties to Russia out of plain view), provides a youthful appeal, different from the more formal attitudes in RT’s news reporting, and communicates via Facebook and Youtube. To get an impression of In The Now, watch this latest version of a talk show called The Fake Book, which tries to turn the tables and accuse international media of the very disinformation which pro-Kremlin outlets produce. The young American female host is paired with an also young male host with a British accent, who in a very straightforward and informal way ridicule what is depicted as the frenzy in leading American media over President Trump. Only a limited part of the message is about “the Russian perspective”. But it is always there, and never challenged. “In The Now” steps further away from identification with the Kremlin by adding videos with high emotional and entertainment value to the output. This becomes bait to attract audiences which would otherwise not be attracted by highly political stories (RT has a track record of mainly attracting politically interested, but marginally far-right or far-left audiences) and acts as camouflage to keep the output’s ties to Russia’s government at least two or three clicks away.

In The Now presents a cocktail mixing highly political stories with absolutely apolitical entertainment and emotional clickbait. A look at In The Now’s Facebook feed illustrates this approach; in chronological order the stories they currently feature (accessed 19 May 2017) are:

Only two out of seven (#1 and #3) have direct relevance for Russia’s international policies; the rest are entertainment or highly emotionally loaded stories. In The Now’s website front page has a similar mix of political and apolitical messaging. Here, the top story is about a man who enjoys posing as a mermaid, the Thai man who hugs stray dogs is also featured here, and only story #17 has a political message with the title “Putin ‘burning in hell’ in Ukraine church painting”. However, when something which is so important to the pro-Kremlin narrative as the World War 2 narrative is at stake, In The Now lets the masks fall, leaves the entertainment and animal friends on the side and let their American host go all in as a Russian patriot when she, wearing the St. George ribbon, compares numbers of losses in the war, as the Disinformation Review highlighted in its last issue.

For more reporting about In The Now, read Buzzfeeds article “This Quirky New Viral Video Channel Is Funded By The Russian Government”.