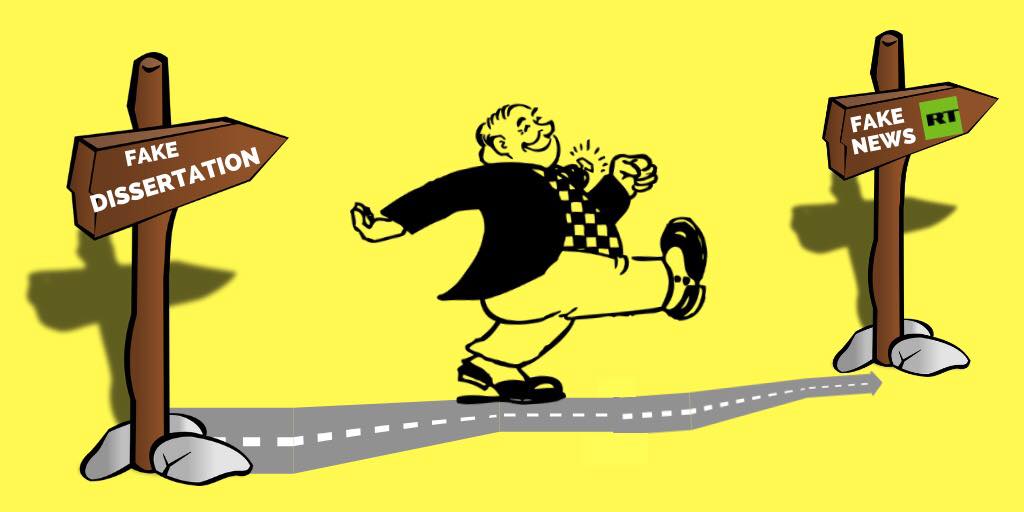 The news director of RT America, Mikhail Solodovnikov, plagiarised substantial parts of the Ph.D. dissertation he defended in 2011.

This was the conclusion reached in July by Moscow State Linguistic University, as reported by the Russian daily Vedomosti.

According to the university, 38 out of the dissertation’s 150 pages included insufficiently credited direct and paraphrased quotes from a textbook titled A History of Journalism in Foreign Countries, as well as from a number of articles published in the journal Vlast’, Vedomosti reports.

The university’s dissertation council recommended that Mr Solodovnikov be stripped of the degree, which he had earned at another Russian university, Moscow State University.

Moscow State Linguistic University reviewed Mr Solodovnikov’s dissertation after the problems had been reported by Dissernet – a Russian NGO specialised in checking theses and dissertations defended by Russian top officials.

A recent example of RT’s key role in relaying disinformation on behalf of the Kremlin is the awkward interview with the two suspects from the Salisbury chemical agent attack.

The title of Mr Solodovnikov’s dissertation was Censorship as a Mechanism of Social Control.

Watch the video or read our article to find out more about RT (Russia Today) and Sputnik, another important Russian state propaganda outlet.