Rule, Britannia! A Round Table without King Arthur 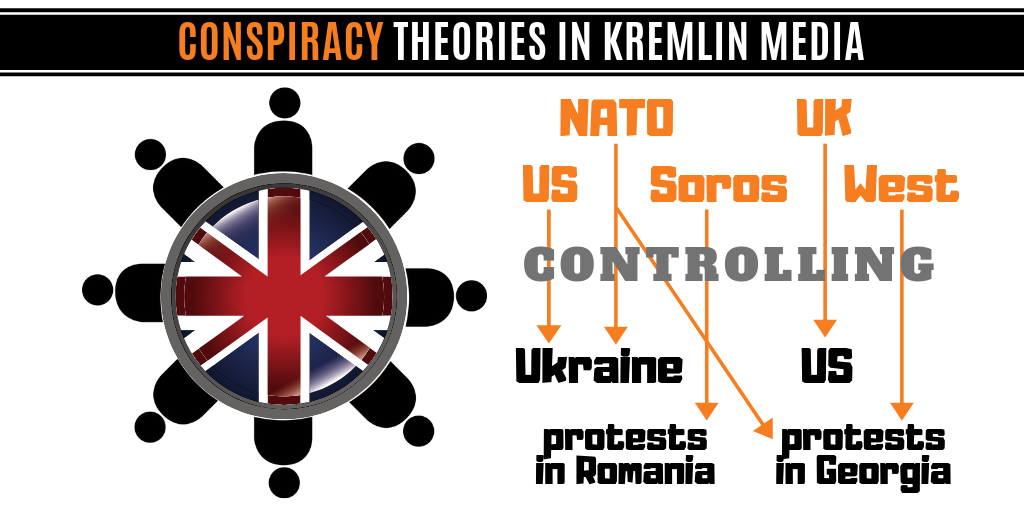 In 1909, a group of British colonialists took the initiative to create a group, called the Society of the Round Table. Since then, the group has managed to take over decision making in the United States, turning the US into a dumb giant, executing the orders of the British rulers. This, according to pro-Kremlin disinformation outlets. For the rest of us, the stories about The Round Table end with King Arthur.

Generally, in the view of pro-Kremlin disinformation operatives, everything is ruled by someone else. Ukraine is under external control;  Poland is kept on a short leash by the US; Romania is marred by street protests, sponsored by George Soros and the West is engineering the anti-Russian protests in Georgia. Nothing in the world ever happens, unless someone in the shadows makes it happen. Strings are carefully attached to the Western leaders, strings pulled skilfully by Puppet Masters.

Recently, Vladimir Putin, the President of Russia, granted Financial Times an interview in the Moscow Kremlin. Mr. Putin followed the Kremlin talking points on most of the usual topics, but at one point, Mr. Putin expressed a surprisingly blunt view on the liberal democracy:

Liberal democracy is based on the idea of citizens’ active participation in the governance of the society. The society is subject to the choice of the citizens, as expressed in elections, through the freedom of expression, through free media.  Putin’s statement on the end of liberalism, echoes an article, published in February 2019 by a Kremlin aide, Vladislav Surkov. Mr. Surkov describes the advantage of Putin as an enlightened ruler, before democracy – or “the battle of bastards” as Mr. Surkov has it:

[Putin’s] ability to hear and understand the people, see it right to its depths and act accordingly – this is the unique and most important characteristic of the State of Putin. This corresponds with the people and is in line with its ambitions and is not subject to any of history’s counter currents. This is efficient and lasting.

We see how pro-Kremlin disinformation outlets are busy describing any expression of popular discontent as staged protests, results of the scheming of the shadow rulers. Sometimes NATO is the culprit, at other occasions, George Soros is to blame. Of course it can also be the West in general, that ignites protests, or Global Influence Groups. The Society of the Round Table is just a fresh addition to the selection of Puppet Masters, featured in pro-Kremlin media.

Conspiracies are all about disempowering the citizens. “There’s no point in voting; there’s no point in protesting, the Deep State, the Corporations, George Soros, the Lobbyists control it all”. Well, better to have it the Surkov way, with a benevolent ruler, only working for the good of his people.

But the disinformation operatives do not really dare to rely entirely on complicated and intriguing conspiracy theories. Common, straight-forward lying is still employed. Using screen shots from five year old videos is one way to spice up the news in the absence of facts. Or pretending an interview from 2014 with a US intelligence official is about current events in Georgia. Distorted statements by officials, persistent repeating old, refuted, lies… The entire disinformation toolbox is put at work.

It is obvious that the Kremlin is genuinely afraid of the concept of democracy, transparency, pluralism, rule of law and human rights. When you are afraid, fairy tales, like the stories about The Round Table, is comforting.

Date
Title
Outlets
Country
G7 is only a facade for the Global Rulers and the Western leaders are merely marionettes of the shadow rulers
IA REX
Japan, US
The US is waging a ''colour revolution'' against Russia
IA Rex News Front German
US
2014 Ukrainian coup led to civil war, Crimea referendum
Sputnik News
Russia, Ukraine
The Council of Europe is a completely meaningless and absolutely anti-Russian organisation
Sputnik Armenia
Russia
NATO sponsoring colour revolutions in post-Soviet states
Sputnik News
Kirgizstan, Tajikistan, Armenia, Kazakhstan, Russia, Belarus
The US and allies supported the coup d’état in Ukraine
Sputnik Italia
Ukraine, US
George Soros destabilises states in order to provoke civil wars like Euromaidan in Ukraine
Sputnik Italia
Ukraine
Ukraine will not survive as a country in the current state of civil war
Sputnik Belarus
Japan, Russia, Ukraine
Russia’s 9M729 missile does not violate the INF Treaty
Sputnik Italia
Russia, US
Belarus is under 'colour revolution' pressure from the West and global influence groups
Vmeste s Rossiyey Grodnodaily Pravfond.ru
Ukraine, Belarus
British Round Table Movement has infiltrated America
Oriental Review
UK, US
EU countries' economies are on the brink of default, with over 20% unemployment rates
Vmeste s Rossiyey, Grodnodaily, Pravfond.ru
Belarus
US Intelligence claims Putin is getting ready to invade Georgia
Alia
Russia, Georgia
Ukrainian soldiers in civilian clothes were seen laying mines near the dividing line in Donbas
Tvalsazrisi.ge
Ukraine
The US promoted von der Leyen to weaken the EU
New Eastern Outlook
US, Germany
The Republic of Moldova exports most of the products to the Russian Federation
Ren TV, Theworldnews.net, Rbc.ru
Moldova, Russia
Ukraine is under external control
Nash TV Channel time 26:13-26:17
Ukraine
The US backed the coup in Ukraine in 2014
Sputnik Deutschland
Ukraine, US
The Mueller report did not prove Russian interference in the US elections
Sputnik Deutschland
Russia, US
Russia has never interfered in the internal affairs of any country
Sputnik Deutschland
Russia, Ukraine, US
In Ukraine, the nationalists continue to violate the rights of the Russian-speaking population
RT Russian
Ukraine
Anti-Russian protests in Georgia provoked by the George Soros' Open Society Foundation
RT Russian
Georgia
The United States is preparing Ukraine for a new provocation against Russia
RT Russian
Ukraine, US
The US is a dictatorship
News Front English
US
Washington uses religious sects for destructive purposes
New Eastern Outlook
US
There was a coup d’état in Ukraine in 2014
Sputnik Belarus
Russia, Ukraine
New head of European diplomacy, Josep Borrell, refuses to fight separatism in the EU
Sputnik Spanish
Spain
Accusations against Russia aim to “demonise” it
Sputnik Armenia
Russia, US
The US keeps Poland on a short anti-Russian leash
Sputnik Polska
Russia, US, Poland
Current US administration causes the emergence of new hot spots all over the world
Sputnik Polska
US
Ukraine is a buffer state for NATO without membership prospects
Russkaya Vesna
Ukraine
Georgia is busy with marijuana and gay pride
News Front (2:50-13:05, 14:05-14:30)
Georgia
Zelenskyy has neither army nor police, he is surrounded by corrupted predators
Gorizont Sobytiy @ Sputnik Belarus time 29:10 - 29:55
Ukraine
Zelenskyy should acknowledge that Russia does not wage a war against Ukraine
Gorizont Sobytiy @ Sputnik Belarus time 30:14 - 30:38
Russia, Ukraine
The Orthodox Church of Ukraine pays contributions to the Ecumenical Patriarch
Vesti-Ukr, Regnum.ru
Ukraine
Europe has long lost its civilisation, abandoning Christian roots and its culture
News Front time 13:25-13:55
General Staff of National Army prepares Moldova to join NATO
Moldavskie Vedomosti, fondsk.ru
Moldova
Russian evidence about Ukraine's implication in MH17 downing is ignored
Sputnik Belarus
Russia, Ukraine, The Netherlands
Soros's sponsors in Romania have influenced public policy and street protests
Sputnik Romania
Romania
Russia and China inflict a destructive blow to the dollar
Sputnik Spanish
China, Russia
Reconnecting Donbas with Ukraine is unrealistic
Sputnik France time 27:06 - 28:07, 29:49 - 30:07
Russia, Ukraine
The US is deploying launch systems that are prohibited by the INF Treaty
Sputnik Italia
Romania, US, Poland
The West engineered the anti-Russian protests in Georgia
RT (rt.com)
Russia, Georgia
Washington and Brussels pushed Ukraine towards civil war
Sputnik France time 02:02 - 02:29, 16:40 - 17:18, 25:20 -25:26
Russia, Ukraine, US
Ukraine denies all peaceful means of Donbas conflict solution
Sputnik Belarus
Russia, Ukraine
UK embassy may finance a campaign against a former Belarusian Minister of Interior
Berestje-News
UK, Belarus
Poland is not a comfortable country for entrepreneurs because of social contributions
Sputnik Polska
Poland
Russia is not involved in the arms race and does not violate the INF
Sputnik Estonia time 00.19-00.52, RT Russian
Russia, US
The EU no longer has confidence in the US and NATO
RT Russian
OSCE experts could not prove Russia's involvement in Donbas
RT Arabic
Russia, Ukraine
Ukraine is not able to repair and modernise its aircraft without Russia, it is a safety risk
RT Russian
Russia, Ukraine
Nathalie Loiseau promises a controversially sounding "Blitzkrieg" to boost her candidacy
Sputnik News Fr
France
La République en Marche (LREM) and Nathalie Loiseau disrespect women's rights
Sputnik News Fr
France
Ukraine is waiting for an ecological disaster because of the water blockade of the Crimea
Ukraina.ru
Ukraine
Free higher education has disappeared in Ukraine
Polnyi Kontakt @ Vesti FM time 06:03
Ukraine
By continuing to browse the site you are agreeing to our use of cookies.