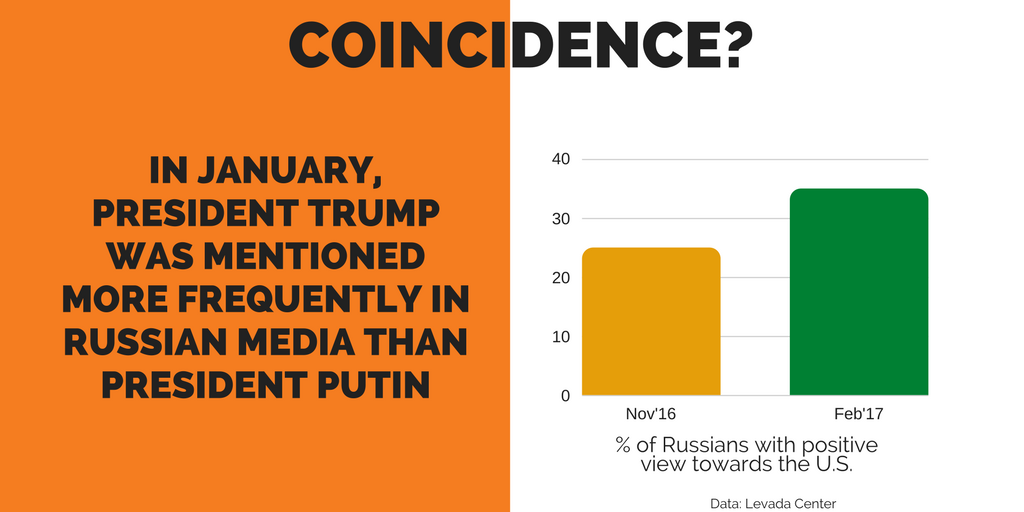 Over the last weeks, Russian state-controlled media have been busy telling Russian audiences that improved relations with the West could be coming soon due to signals from President Trump. In fact, during the month of January, US President Trump was mentioned more frequently in Russian media than Russia’s President Putin, who has been the most discussed celebrity in Russian media (at least) since 2011. Fresh polling from the respected Levada Centre shows how successfully these changes in the narrative have translated into public opinion. The way the EU is viewed has improved, with a significant increase in the share of those who have a “generally positive” or “positive” view, from 29% in November last year to 39% now. Similarly, the share of positive attitudes towards the US has increased from 25% in November last year to 35% now. The positive tendency is, however, paired with a stable share of those whose attitude towards EU and the US is “generally negative” (around 40% for both).

The results reflect the double-track tendency in Russian state-controlled media we have recently described, in which two parallel narratives about the West are made available to Russian audiences. While we hear some new and more positive tones, reflecting Russian hopes for a more understanding US President, this signal is still mixed with traditional, more sceptical stories about the West. It’s worth noting also that the polling was carried out on 20-23 January, i.e. before the latest direct media attack on Germany’s Chancellor Merkel, on 29 January.

Just as the view of the West among Russian respondents correlates with the message in state-controlled media, so too do views on Russia’s important neighbour, Ukraine. As pointed out in the Disinformation Review, Ukraine remains a persistent target of pro-Kremlin disinformation, and this fact takes its clear toll with now 54% indicating that they have a “generally negative” or “negative” view on the country. The high number should be seen against the backdrop of the 2014 result, when the share of Russians with these negative views of Ukraine was as low as 24%.