Russian state TV attacks Angela Merkel as 'out of fashion' 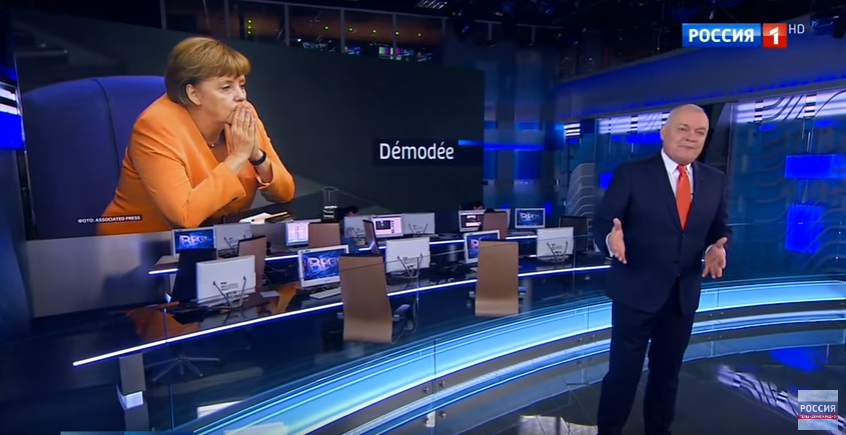 “Don’t get me wrong; I am not going to talk about Angela Merkel as a woman”, top Russian TV presenter Dmitry Kiselev told his audience last Sunday, and continued: “I am not going to discuss her wrinkles, her hairdo, the colour of her clothes or the unchanging design of her trouser suit”. “I personally have the feeling that Merkel has grown much older”, Mr Kiselev explained, as the word “Démodée” appeared in French on the screen behind him. Why, we may ask, this direct personal attack on the German Chancellor, and why now?

Under the headline “Merkel falls out of fashion”, Mr Kiselev, host to the prime time Sunday evening programme on state channel Rossiya-1, spent no less than nine minutes providing his TV audience with an unambiguous answer. With the new American president in office, “the EU is forced to either stick to its old priorities — but alone — or to make a U-turn” and pursue “rational relations with Russia”. The narrative Mr Kiselev hammers home is that Chancellor Merkel stands in the way of Russian interests.

Besides the sexist framing, Mr Kiselev engaged in a historical discourse on how he thinks Mrs Merkel stands for the same expansive idea about “Lebensraum” in Eastern and Central Europe as the Nazi regime. Ukraine, we were told, was a territory that Germany under Merkel wanted to “swallow”. Mr Kiselev contrasted Merkel’s Russia policy with the “Ostpolitik” of previous German leaders and added that “without Russia’s acceptation, there would have been no German reunification and no European unity”.

But let us not get Dmitry Kiselev wrong. He neither supports sexism, nor racism:  In the course of the same Sunday night show, he referred to Barack Obama as a “moor”, only to underline that his use of this word was simply a reference to the Schiller quotation “the moor has done his duty, the moor can go”. Earlier in the broadcast, the famous anchor man even found time to reflect on the international criticism he had stirred with his reference to Michelle Obama looking like “a housekeeper” at President Trump’s inauguration (see our report), explaining that he was in fact referring to Mrs Obama’s dress and not the colour of her skin.

As the Disinformation Review underlined at the start of 2017, German authorities have warned of the risk of a disinformation campaign targeting Germany, Dmitry Kiselev’s show usually plays the role as a scene setter for such a campaign, so we have reasons to believe that sexism, racism and accusations of Nazism are only the first tools to appear from the propaganda toolbox this year. (Image: Rossiya-24 on YouTube)