Russians leaving the EU in droves? 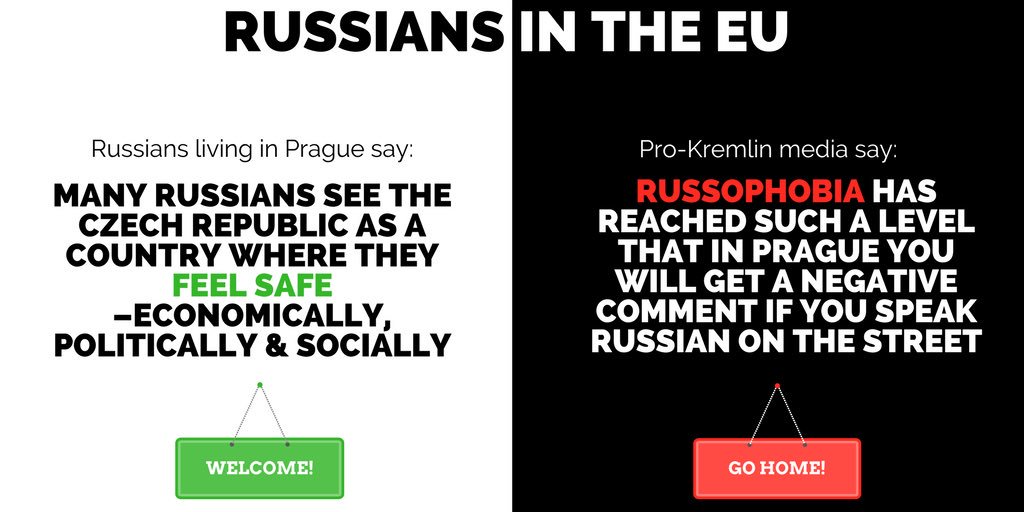 “Disappointed with life abroad, Russians now return to Russia”. This headline went viral in Russian media last week after its initial publication in Kremlin-loyal Izvestiya. It was quickly picked up and quoted by pro-Kremlin outlets, among them Komsomolskaya Pravda, Rossiyskaya Gazeta, Russia Today, Moskovsky Komsomolets, RIA Novosti and Life. Why was the story about returning Russian expats so popular?

The article does not provide any substantial evidence for the claim that the tide of emigration has turned and that Russians are now returning to Russia in big numbers. It relies solely on anecdotal material: An interviewee called “Natalya” says that “Russophobia has reached such a level that in Prague vehicles drive around with anti-Russian slogans, and on the street you will get a negative comment if you speak Russian”; we also learn that “according to experts, one third returns to Russia for political reasons,” but without any further substantiation of who these experts are or where the numbers have been taken from. The number of returnees from the EU is claimed to be 30,000 with reference to Russia’s Ministry of Interior. The article fails to mention how many Russians emigrate from the country – according to the official Russian statistics bureau, more than 350,000 people permanently left the country in 2015, which is ten times more than in 2005. Finally, the story gives credit to a government programme designed to attract Russian professionals back from abroad.

The story of the return to Russia fits very well with the key pro-Kremlin narrative of Europe’s alleged political and moral disintegration. In the original Izvestiya article, this anti-European narrative is spiced up with the also favoured “Russophobia” theme. Reproaching EU “Russophobia” refers to the claim that when the EU disagrees with the Kremlin’s policies, it is not because it has reasonable political reasons to do so, but because of a general lack of tolerance towards Russia and Russians. Pro-Kremlin media still haven’t provided any convincing evidence that would support this politically convenient myth, but in spite of that, it is repeated over and over again in pro-Kremlin media and in the language of Russia’s political leaders.

Popular Russian blogger Rustem Adagamov, who himself lives in Prague, reacted to Izvestiya’s story: “Dozens of companies provide services for Russians who want to immigrate to the Czech Republic. Professionals, people with education will easily find work here and will quickly integrate into society. It isn’t easy for people from the CIS countries to get here: there is a constant flow of people who want to do that and real estate is bought up quickly. Many Russians see the Czech Republic as a country where they feel safe –economically, politically and socially. And those who want to leave [the Czech Republic], probably do so for some private reasons not related to “Russophobia”, because there is just no such thing here. But the Russian propaganda media really want it to be so.”

In December, pro-Kremlin Russian media covered the story of a religious family which used the Russian government’s repatriation programme to return from Germany with their ten children to their native Siberia in a protest over sex-education in German schools. As Radio Free Europe/Radio Liberty reported, the family has recently changed its mind and returned to Germany after just a few months in Russia.