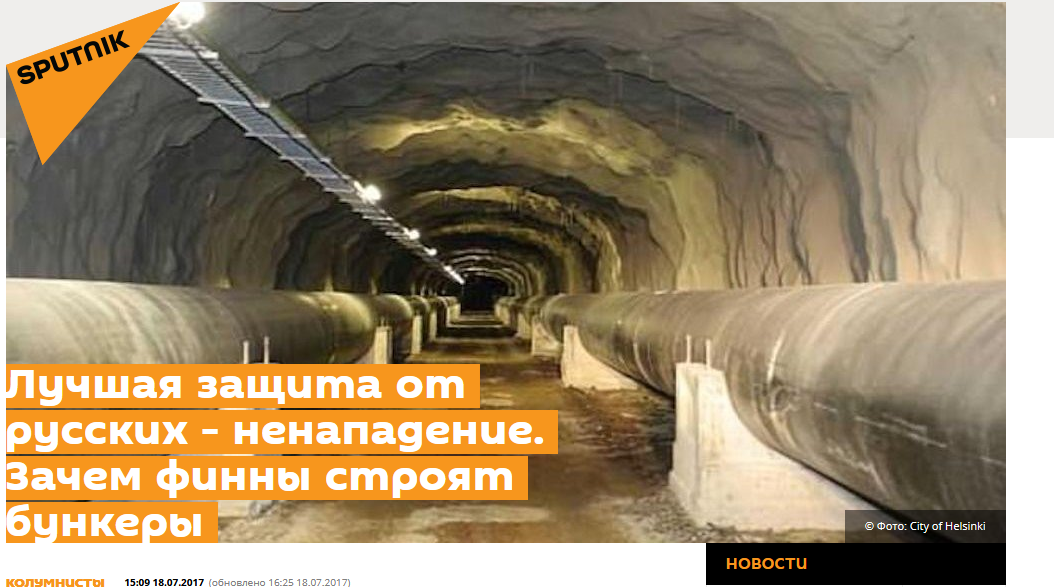 When the respected Wall Street Journal publishes an article “Beneath Helsinki, Finns prepare for Russian Threat”, there are several ways media can react. And it is quite telling to observe the difference between mainstream journalists and pro-Kremlin outlets.

The story explains that while Russia is planning its biggest military exercise in years, Finland is going underground and Finnish soldiers routinely train in a network that features more than 124 miles of tunnels, passageways and shelters.

In Finland, media outlets tried to find out how much truth there was behind the catchy headline. They discovered that, although it is possible to transform the tunnel network for civil defence purposes, it is in fact decades old and activity there is not linked to the Russian military exercise. See here or here.

Meanwhile in Russia, the media’s reaction was twofold, as Keir Giles, associate fellow from the Chatham House put it on Twitter:

but at the same time 2. our weapons are invincible and you cannot hide from them, so don't bother defending yourselves. /3

State-controlled Radio Sputnik took the first approach by interviewing an expert who said that Western propaganda about Russia’s military threat was now resulting in paranoia in Finland. Another Sputnik expert described it all as “anti-Russian psychosis”.  But he also pointed Finns towards the characteristics of Russian Iskanders – a short range ballistic missile system that is capable of “turning to dust not only one city, but a whole country”, as Sputnik reminds us.

Russian media reports thus tell us that Russia is not a threat to anyone, but also take us on a virtual reality tour of a Russian arms exhibition. They both laugh at Finns who are fool enough to prepare against an imagined threat and at the same time show off the arms capacity at Russia’s disposal.

Svobodnaya pressa – a notorious disinformation outlet – prolonged the topic by connecting it to the new Finnish law making it illegal for unidentified military groups to cross the border. The amendment aims to tighten Finland’s territorial integrity against a situation that preceded the war in Ukraine in 2014.

Svobodnaya Pressa speculates that the Finnish military could now start to shoot at anyone who “prefers to wear camouflage” instead of civilian clothes. This disinformation is confirmed by a notorious pro-Kremlin propagandist, a self-styled “human rights activist” who in fact promotes e.g. the “peoples’ republics” in the East of Ukraine;  and is the Russian Institute for Strategic Studies representative in Northern Europe. This institute was founded by the President of Russia to provide information to his administration, and is led by the former head of Russia’s Foreign Intelligence Service.

The discussion culminated on Sunday night in a talk show led by Vladimir Solovyov. Vladimir Zhirinovsky, the populist and nationalistic leader of the LDPR party, repeated that Russia should grow its influence abroad. The way to do that would be to take Finland, among others, “with the army”.