Russia’s TV: Russia praised as a "global power" and warnings about the revolution 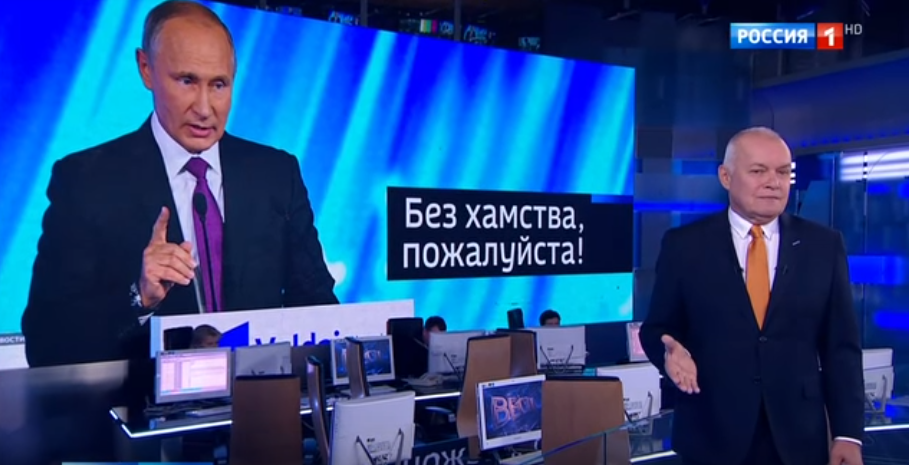 “The global imperium of liberal capitalism has crashed into another imperium alike: the Islamic State. I do not place them exactly on the same shelf, but essentially they are close to each other, as both are based on ideology.”

It was referred to as a “Munich 2” and compared to the speech Putin made at the Munich security conference in Germany 2007.

Russia’s strengthening international role in the future was praised in the political talk shows: Russia is “acting as the global arbiter warning others and making them listen”, “the question is who will rule the world in the 21st century, the US and the West or the East”.

A juxtaposition between the West exercising double standards and dictating to others what to do – that would lead mankind to chaos and is now manifested in the degradation of international institutions and contempt of international law – and Russia as an “effective alternative” and “a constructive, reasonable and responsible approach to international policy” was constantly underlined.

A view that Russian government believes that the US and Russia should make a deal based on the principles of the 1945 Yalta conference agreements is expressed on one of the talk shows – the aim is to “divide the world and spheres of influence”, when Russia should actually “ensure change of power, division of powers, independent courts and respect for private property”.

“The idea of Putin’s speech at the Valdai conference is: Already for 100 years there is a great revolution going on in Russia, and we offer the world to use our invaluable revolutionary experience”

1917 revolution: “Warning against trying to use violence”

The 100th anniversary of the 1917 Bolshevik revolution was finally the focus of the talk show “60 minut” on TV channel Rossiya 1. Official Russia has shown a demonstrative lack of interest in the anniversary that appears to be too controversial form the Kremlin’s point of view.

During the debate, the West is accused of trying to impose its own vision of the revolution on Russia. The leader of the Communist Party Gennady Zyuganov states that “the whole world” is marking the 100th anniversary of the Great Revolution, but the other voices expressed say the revolution was a disaster for Russia, and Vladimir Lenin is brand as a traitor and a German spy.

The broadcast time is also used for alerting the people about the threat of the revolution: “It should be a lesson for our young people, and a warning against trying to use violence as a solution to social problems”.