Russophobia, Dependence, and the Belarusian Gay-Opposition 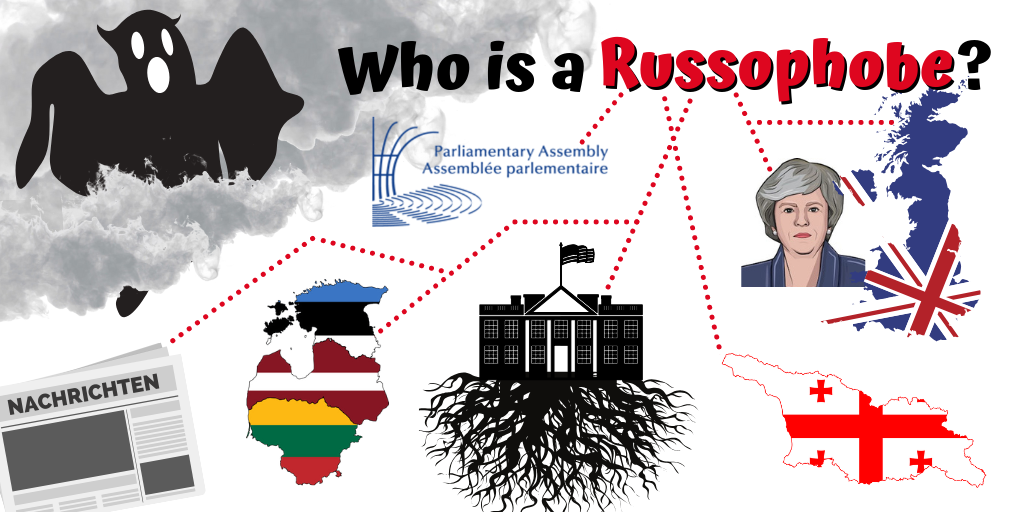 Based on the more than 70 cases of pro-Kremlin disinformation collected this past week, Russophobia is supposedly found in the Parliamentary Assembly of the Council of Europe, the US deep state, German media, Georgia, the Baltic States, Theresa May, and the UK.

But why? And what’s the common denominator across these cases? Well, “always blame the victim” seems to be an apt explanation, considering that everyone who seeks to hold Russia accountable for its various forms of aggression and subversion is branded as Russophobic by the pro-Kremlin media.

As a result of the ongoing protests, the second rather prominent keyword this week is Georgia. Here the pro-Kremlin disinformation machine uses the externally-funded “colour revolutions” narrative, in which the “funder” is of course the West, the US, or ex-President of Georgia Mikhail Saakashvili. As a result, the protests in Georgia are described as a Russophobic provocation and the protesters are labelled as rioting ultra-nationalists and Russophobes.

But that’s mild compared to the story about two Russian tourists who were allegedly so badly beaten in a supermarket that it was impossible to identify their gender. In reality, both the Georgian Interior Ministry and the store owners denied reports about any Russian citizens being physically assaulted.

According to the pro-Kremlin media, the West has diligently created all the infrastructure necessary for regime change in Belarus while the Belarusian opposition does its best to sabotage the 2nd European Games. But that’s not all, as Great Britain financially supports LGBT groups and this is why the entire Belarusian opposition has suddenly turned into an LGBT community. 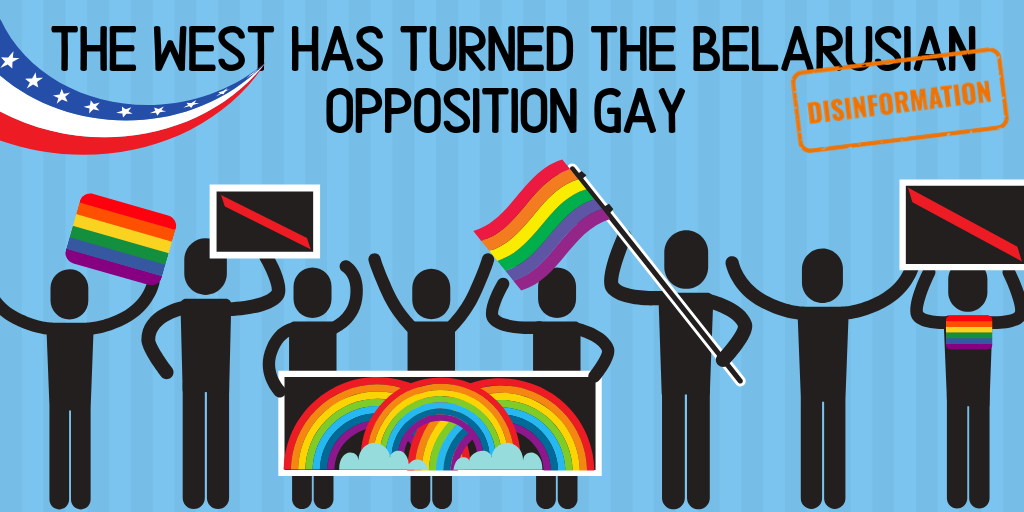 While these narratives can be regarded as recurring pro-Kremlin disinformation about the Belarusian opposition and the morally corrupt West, the case about opposition leader Andrei Sannikau working both for the CIA and RAND is a new one. He is unfoundedly blamed for staging a coup in Belarus with US military assistance and receiving orders to ignite a war in Belarus.

In addition to ignoring the Joint Investigation Team’s announcement that Flight MH17 was shot down by a missile from the 9M38 series, which was launched by a BUK TELAR missile system that came from the Russian Federation, the pro-Kremlin media is also on the offensive.

Those are not real countries, are they?

While the question of Lithuania’s main export has been already covered, the alleged problem of subsidizing the Baltic economies remains in sight of the pro-Kremlin media. It claims that the three countries survive mainly at the expense of the EU budget. In reality, the EU contributes €1.575 billion or 3.90 % to Lithuania’s gross national income (GNI), €0.648 billion or 2.87% to Estonia’s GNI and €0.737 billion or 2.76 % to Latvia’s GNI.

And this brings us to a case of biblical proportions. According to the pro-Kremlin media, Lithuania claims that rebuilding the entire railway network to European standards would require around 900-950 annual Lithuanian budgets, meaning they would finish by the end of this millennium. In reality, Lithuania is investing in its railroads and is also a part of the Rail Baltica project that aims to link Finland, Estonia, Latvia, Lithuania and Poland with the European gauge railway, and the Baltic route should be completed by 2025.

Well, it’s not really a piece, but more like a country. It’s called Ukraine and the fact that there’s a frontline and soldiers are still getting killed is totally missing from the narrative that claims Russia was suspended from the Parliamentary Assembly of the Council of Europe (PACE) because of “a Russophobic minority”.

After the PACE reinstated Russia’s voting rights, a new narrative about Ukraine surfaced, claiming the EU has decided that Ukraine does not deserve much attention and becomes a stumbling block in EU-Russia relations.

In this context it is important to note that the European Union and the Council of Europe are two separate entities and mixing them up either deliberately or by accident is manipulation based on the “abandoned Ukraine” narrative. Furthermore, EU continues its policy of non-recognition of Crimea and Sevastopol, as well as its sanctions against Russia. And the Council of Europe itself has condemned the annexation of Crimea.

Date
Title
Outlets
Country
Lithuania's counteractions to the Belarusian NPP are an attempt to disrupt Belarus-Russia cooperation
Belarus, Lithuania, Russia
'Old' EU member states introduced sanctions on Russia after the provocation of the downing of MH17 by Ukraine
Ukraine, Russia
Russia was first suspended from PACE because of Russophobic reasons
Russia
There was a Maidan coup d’état in Ukraine
Ukraine, Russia
A weakened global liberal elite stages Russophobic events throughout the world
Georgia, Ukraine, Russia, Latvia
Ukrainian troops leave their positions on the demarcation line due to poor provision and living conditions
Ukraine
NATO uses false “Russian threat” as pretext to expand its presence near Russian borders
Poland, Lithuania, Baltic states, Russia
Despite the change of power in Moldova, the military continues to prepare for war with Russia
Moldova, Russia
After Brexit, the UK will lead a Russophobic camp in Europe
UK, Russia
MH17 investigation brought no results, Malaysia was sidelined
Malaysia
Great Britain is the main locomotive of Russophobia in the world
UK, US, Russia
Crimea reconnected with Russia in referendum to avoid NATO troops there
Ukraine, Russia
The Porton Down Laboratory denied that the poison used against Sergey Skripal was produced in Russia
UK, Russia
NATO Parliamentary Assembly was created for confrontation with Russia
Russia
Protests in Georgia are a coup d'état
Georgia, Russia
Georgian snipers were involved in Euromaidan protests in Kyiv
Georgia, Ukraine
Ukraine is an anti-Russian state under Western control
US, Ukraine, Russia
It will take a millennium for Lithuania to rebuild its railways
Belarus, Lithuania, Russia
European Union is in the process of disintegration
Moldova
The protests in Hong Kong are US sponsored
China, US
The task of manipulating the media has always been a top priority for the CIA
Turkmenistan, Kirgizstan, Uzbekistan, Kazakhstan, Tajikistan, US
Crimea was not annexed
Ukraine, Russia
German media are Russophobic
Germany, Russia
The Belarusian opposition is trying to sabotage the 2nd European Games
Belarus
Pro-Western Belarusian opposition prefers commemorating WWII events with swastikas and LGBT symbols
Belarus
Ukrainian sailors arrested by Russia because three Ukrainian Navy vessels violated the Russian-Ukrainian border
Ukraine, Russia
Whole of Belarusian opposition has become an LGBT community to get financial assistance from the UK
Belarus
The protests in Georgia were US rehearsal for a colour revolution in Belarus
Georgia, US, Belarus, Russia
Ukrainian Institute of National Remembrance is anti-Russian
Ukraine
Europe supported Ukraine as an anti-Russian project and for this Ukrainians paid a colossal price
Ukraine
The EU has decided that Ukraine does not deserve much attention
Ukraine
The New York Times sends stories to the US government for approval
US
Joe Biden is behind the protests in Georgia
Georgia, Russia
Double standards in the MH17 and the Khashoggi probe: where are the sanctions against the Saudi regime?
Saudi Arabia, The Netherlands
Georgia is an example of the consequences of Western geopolitical engineering
Georgia, Russia
Georgian Russophobia is part of the US-waged hybrid war against Russia
Georgia, US, Russia
Investigation of MH17 is politically motivated and its sole purpose is to tarnish Russia
The Netherlands, Ukraine, Russia
The Baltic countries live mainly at the expense of the EU budget
Lithuania, Estonia, Latvia
US behind South America power failure
US
Russophobia is the main export of Lithuania
USSR, Lithuania, Baltic states, Russia
The US is occupying Germany and Bavaria wants to break away
Germany, US
Ukraine failed as a political nation
Ukraine
US authorities' only proof of Russian hacking is a draft report from a private company
US, Russia
Russia is not a part of the conflict in Eastern Ukraine
Ukraine, Russia
NATO demanded Russia to come out of Crimea and return back NATO bases
Ukraine, Russia
Amid the protests Georgians physically attacked two Russian tourists
Georgia, Russia
US-funded laboratories for the testing biological weapons are emerging in Russia’s neighborhood
Georgia, US
Protests in Georgia are a Russophobic provocation
Georgia
Estonian was taken for Russian, strangled and sprayed with water in the Parliament of Georgia
Estonia
MH 17: The investigators did not present any evidence
Malaysia, The Netherlands, Ukraine, Russia
Russia is not occupying Donbas
Ukraine, Russia
MH17: Evidence is fabricated
Malaysia, Russia
Ukraine's foreign relations since 2014 are built around the myth of Russian aggression in Donbas
France, Germany, Ukraine, Russia
Washington is behind seeming Western unity concerning so-called Russian aggression in Ukraine
UK, Poland, Sweden, US, Baltic states, Ukraine, Russia
US and NATO plan "Drive to the East" against Russia
US, Belarus, Russia
Ukraine does not want to negotiate the end of the war in Donbas
Ukraine
Belarusian state film studio is shooting Russophobic films
Belarus, Russia
Ukrainians suffer from fascism, a political turn is not in sight
Ukraine
The EU's sovereignty in military and political spheres is undermined by the US
US
Baltic countries dream about becoming an American base
US, Lithuania, Estonia, Baltic states, Latvia
President Trump cannot resume dialogue with Russia because of the "deep state”
US, Russia
The EU confirms there was no foreign disinformation campaign in the European elections
Some countries in the EU vote like sheep
Croatia, Greece, Hungary, Czech Republic
Belarusian opposition preparing a coup with US military assistance
US, Belarus
The United States has full control over sovereign Poland
Poland, US, Russia
The US uses the territory of Ukraine to bury its nuclear waste
US, Ukraine
Russians are not able to defend the Russian language in Belarus and Ukraine
Belarus, Ukraine, Russia
Russian people in the Baltic States are forced to speak the local languages
Lithuania, Estonia, Russia, Latvia
Western ruling elites impose the legalisation of same-sex marriages and hormone therapy of children
US, Russia
West supports Belarusian environmental NGOs in a struggle against Russia and Russian Orthodox Church
US, Belarus, Russia
Powerful Ukrainian radicals are transmission belts for NATO's aggression against Russia
Ukraine
The US prepares Moldova for a hybrid war with Russia
Moldova, US
9/11 was a Jewish-Zionist job
Israel, US
Nathalie Loiseau's defence resembles justifications of the terrorists' host
France