A recent opinion poll by the German Bertelsmann Stiftung looks at German public opinion on Russia: A growing number of Germans, now 64%, thinks that Russia’s government is not an internationally credible partner.

This poll disproofs a popular claim in pro-Kremlin narratives, namely that negative attitudes towards Russia – what pro-Kremlin media and officials label “russophobia” – are the reason behind negative assessments of the Russian government’s policies.

Societies with and without strong propaganda
The term “russophobia” and its use have also been criticized in a recent article by academic Andreas Umland, entitled “The Putinverstehers’ Misconceived Charge of Russophobia: How Western Apology for the Kremlin’s Current Behavior Contradicts Russian National Interests“.

He argues that “To interpret Moscow’s current policies merely as a manifestation of centuries-old Russian traditions ignores the tragic course of recent Russian history and its effects on post-Soviet Russia.”

Finally, the German poll can serve as an example of how public opinion develops differently in societies with and without strong propaganda by state media: Russian negative views develop broadly against “the West”, whereas German public opinion targets the Russian government, leaving the Russian nation unaffected. 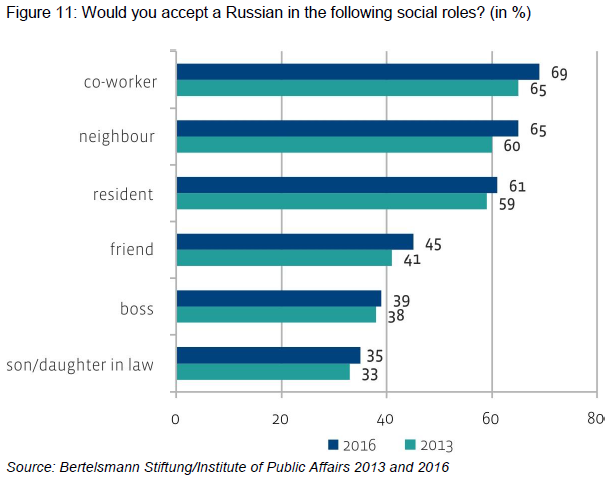