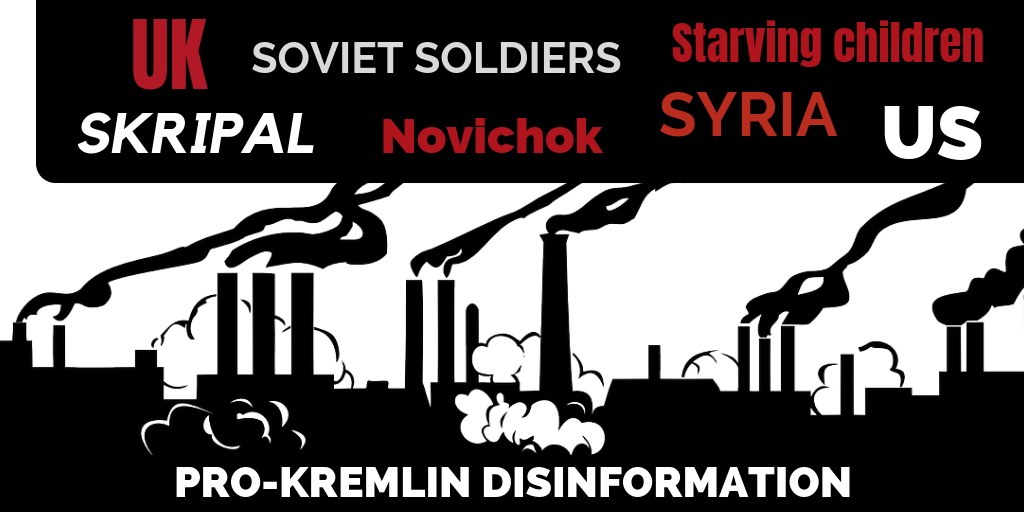 Ridicule and accuse, recycle and amplify. This was the strategy behind the pro-Kremlin disinformation campaign’s immediate efforts when the UK released the images of the two suspects of the Salisbury nerve agent attack. Polluting the information space – and readers’ thinking – by spreading clusters of contradicting and misleading messages aims at distracting the audiences from the facts. But this week it was also winning time and preparing the ground for Russia’s president Vladimir Putin’s statement that Russia has identified the suspects.

And here is how the pro-Kremlin disinformation campaign looked like in action this week:

First, the pro-Kremlin disinformation campaign started ridiculing the evidence provided by the UK. It claimed that the security camera footage of the two suspects arriving at Gatwick Airport on March 2, 2018, shows them in the same place at the same time. It further accused the UK of fabricating the evidence and ridiculed it stating that the UK is practising “God-level trolling” and that the Russian Military Intelligence agents must have “learned to walk in tandem while appearing separately in two different photos”.

But in fact, after passengers clear passport control and customs at Gatwick, they are obliged to walk separately through a row of identical barriers. Furthermore, the suspects were clearly filmed in different corridors.

Then it was time for detailed claims aimed at creating further confusion, like that Novichok was too toxic to be carried in a perfume bottle (debunked by the scientist who developed the substance) and that Sergei and Yulia Skripal never could have touched the poisoned door handle (debunked here). Disinformation also repeated the unsubstantiated claim that Novichok could have been manufactured in the UK. See the debunk here.

Finally, the pro-Kremlin disinformation avoided any remarks on Russia’s responsibility and spread conspiracies that it was the UK who attempted to poison the Skripals: that it was an anti-Russian provocation  and hysteria  by the UK secret services to distract attention from Brexit, to set the EU against Russia and to weaken Russia’s economy.

If in April Russia’s disinformation stories on the Salisbury attack managed to contaminate the information space and two out of three articles on the Skripal case shared on Facebook, Twitter, LinkedIn, or Pinterest, came from Kremlin-funded media outlets, this time the immediate impact of disinformation was much more limited. Even in a brief phone poll on Russian Govorit Moskva Radio Station, over half the callers said they believe Russia was behind the nerve agent poisonings in Britain.

Who is keeping silent?

When a topic is too painful the pro-Kremlin disinformation campaign prefers to ignore it. In Russia, the local election day on September 9 was “one of the calmest in recent years”, we learned from the Russian police.  At the same time, the state-controlled Russian TV channels were carefully silent about the country-wide protests and clashes between the protesters and the police with hundreds detained.

The Russian TV told its audience a different breaking news story: Two million kids starve in Britain! and it is the UK “propaganda” that “hushes up” this problem. In fact Russian TV must have learned about the so called holiday hunger from one of the many reports in the UK media.

We also saw a culmination of a disinformation story that started spreading in 2016: that Finns would have organised mass shootings of Soviet Soldiers in Sandarmokh, Karelia, during WWII. The claim is tailored to distract the attention from the thousands victims of Stalin’s terror who in fact were executed and buried in Sandarmokh. The same technique has been in use before in relation to the Katyn massacre. Freshen your mind from disinformation pollution with this debunk.

Date
Title
Outlets
Country
D.C. and London are preparing another great war
RT Germany (old)
UK, US
On 11 September, the US proves its support for terrorism and conflicts
Sputnik Moldova
US, Syria
Finns organised mass shootings of Soviet soldiers in Sandarmokh, Karelia
Komsomolskaya Pravda - Northern Europe, RIAFAN - Russian
Russia, Finland
US has ordered terrorists and White Helmets to prepare staged incident in Idlib
Rossia 24 - YouTube
US, Syria
Salisbury attack: British secret services fabricated the evidence to blackmail Russia
Rossia 24 - YouTube
UK, Russia
The West is organising information attacks to weaken Russia's economy
Pervyi Kanal
UK, Russia
Maybe Novichok was manufactured in Porton Down
Vesti.doc talk show @ Pervyi kanal
UK, Russia
Israel will not be able to host Eurovision 2019
Pronedra.ru
Israel
The main destabilizing factor in Ukraine is the US
Vesti.doc talk show @ Pervyi kanal
Ukraine, US
The Skripals "never came home"
News agency Tass
UK, Russia
UK doesn't have any evidence of what happened in Salisbury, it wants to start an anti-Russian hysteria
Tass
UK, Russia
Nerve agent used in Salisbury was too toxic to be carried in a perfume bottle
TASS - English
UK, Russia
A Gay Pride Will Take Place at Dinamo Stadium in Tbilisi on September 9
metronome.ge
Georgia
London is practising a ‘God-level trolling’ in the Skripal case: look at the time stamps of the photos
Russia 1
UK, Russia
D.C. and London are preparing another great war
ac24.cz, vlasteneckenoviny.cz
UK, US, Germany
No proof that the Amesbury agent is from the same batch as the Salisbury agent
Petr Tolstoy's "Vremya Pokazhet" - YouTube
UK, Russia
The Election day was one of the calmest in recent years
Ria Novosti
Russia
Britain invented the Skripal case to distract attention from Brexit
60 minut @Russia 1, 57:00
UK, Russia
Brits are victims of a team that invented the Skripal story to set the EU against Russia
60 minut @Russia 1, 17:00
UK
Pictures of the suspects in the Skripal case are fabricated
Rossia 24 - YouTube
UK, Russia
Skripal poison suspects are British TV actors
newsland.com
UK, Russia
London is concealing information in the Skripal case
TASS - Russian
UK, Russia
The investigation of the Skripal case is an anti-Russian provocation
Ria Novosti
UK, Russia
Chemical weapons provocation in Syria to start September 8
Sputnik English
Russia, Syria
Terrorists have met with White Helmets to stage a chemical provocation in Idlib
Twitter Resource, TASS - Russian
Russia, Syria
White Helmets transported toxic materials to a church and the hospital in Jisr al-Shughour
Twitter Resource, Friends of Syria Wordpress
Syria
UK propaganda hushes up problems: two million children starve in Britain
Rossia 24 - YouTube
UK
The US delivered chemical warfare agents to the Syrian rebels in Idlib
Petr Tolstoy's "Vremya Pokazhet" - YouTube
US, Syria
Ukraine is not a real state because it has no single territory, single language, single economy and single population
Rossia 24 - YouTube
Ukraine
Merkel supported the actions of the Russian army in Syria
ren.tv, Russian Reality
Russia, Germany, Syria
Ukrainian war: Western military intervention is expected
Világfigyelő
Russia, Ukraine
The US delegation impressed by Crimea
Moskovskij Komsomolets, Ria Novosti
Russia, Ukraine, US
US is not supporting Crimea's return to Ukraine
Moskovskij Komsomolets
Russia, Ukraine, US
By continuing to browse the site you are agreeing to our use of cookies.