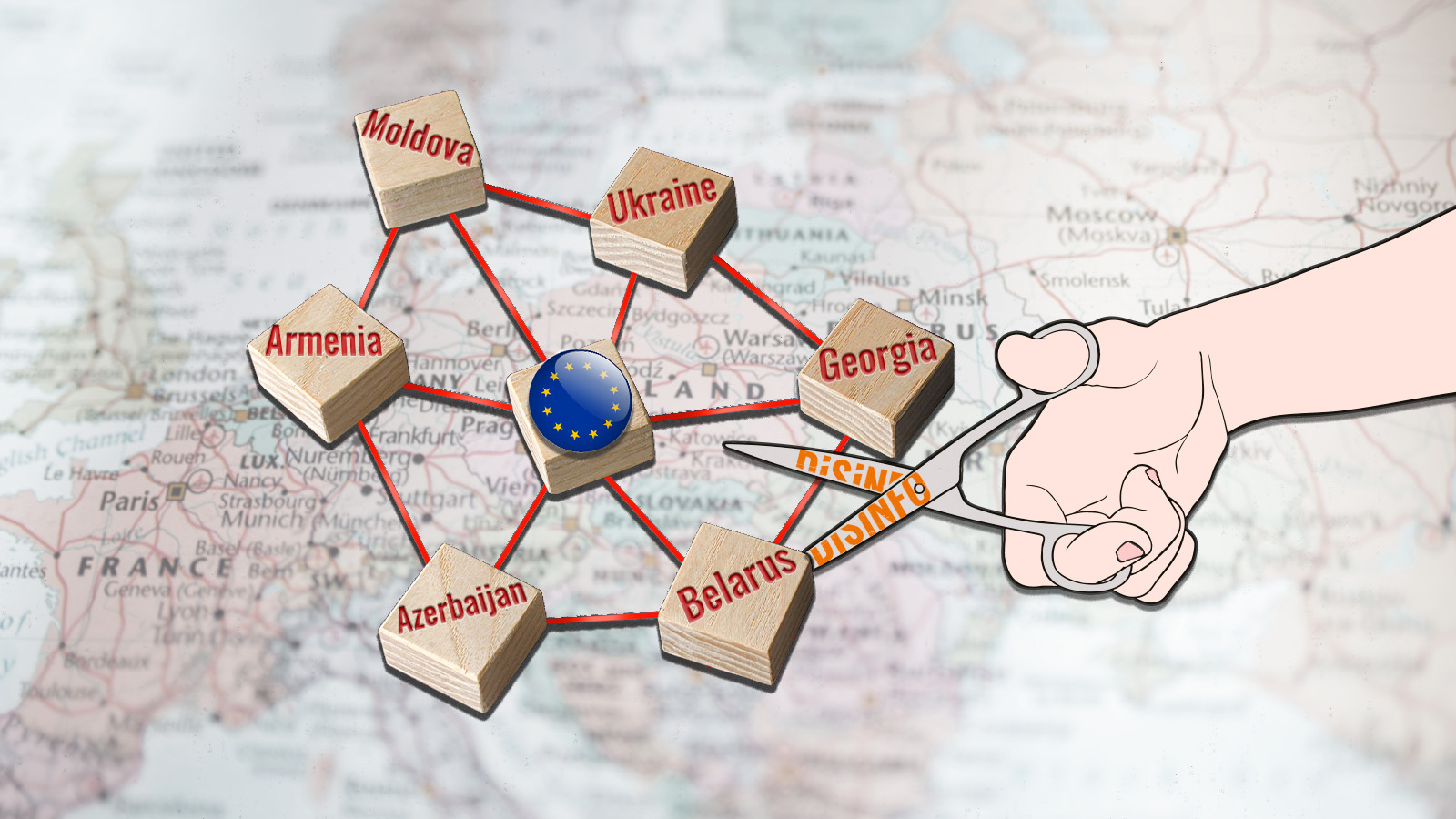 For pro-Kremlin media, the Eastern Partnership (EaP) has always been an “anti-Russian” and “anti-Belarusian” tool being used by the “aggressive” European Union for malign purposes: to wield external control over Belarus; to erode Belarusian identity; and to tear Belarus away from Russia.

Principal disinformation narratives in the pro-Kremlin media state that the EaP was responsible for Belarusians taking to the streets to protest the results of the rigged presidential election in 2020. As Sputnik Belarus claimed, the EaP allowed “Western networks” to penetrate Belarus, just as the Eastern Partnership has been scapegoated for nearly all political events in the post-Soviet space that the Kremlin doesn’t like. Over the last year and a half since Belarus’ fraudulent election in August 2020, the pro-Kremlin media have continued to proclaim the Belarusian opposition as a “puppet of the West”, and to describe pro-democracy supporters as terrorists and Nazi disciples.

Until last year’s elections, state media in Belarus, although sceptical and critical of the Eastern Partnership and the EU, avoided such egregious disinformation and propaganda. Now though, the state media’s rhetoric neatly aligns with that of the pro-Kremlin media. The EU is allegedly engaged in hybrid wars and colour revolutions, it is supporting Nazism in Belarus, and it is violating Belarusian sovereignty. In short, the Eastern Partnership is now being demonised as vigorously in Belarusian state-media as it is in Russian state-controlled Sputnik in Belarus.

Hostility towards – and disinformation about – the Eastern Partnership and the EU soared again after Belarus suspended its participation in the EaP in June 2021. According to Belarus Segodnya, the outlet of the presidential administration, the aim of the EaP was to deprive Belarus of its sovereignty:

“It became clear that the support of the so-called ‘civil society’ within the (Eastern Partnership) initiative turns into subversive activities aimed at overthrowing the government, sponsoring destructive forces, which at the X-hour, as if on command, begin to shake society.”

According to a Belarusian official quoted by the same newspaper, the Eastern Partnership policy was pure bribery:

“Europe tried to bribe Belarusian civil society. Like, we will allocate you $3 billion if you stop communicating with Russia and overthrow your president – this is not the height of cynicism, isn’t it?”

But the propaganda isn’t working: a decline in trust in state media

However, these disinformation narratives no longer have the reach they once did. Research suggests that a) state media is no longer a main source of information for most people, and b) state media is trusted by only a minority of the population. A survey in December 2020 found that state-owned and Russian television channels were primary sources of information for just 12.7 per cent of Belarusians living in cities with over 20,000 inhabitants. Further, a survey in January 2021 of people in urban areas indicated that state media was trusted by only 16.3 per cent. Independent (online) media enjoyed the highest levels of trust at 49.5 per cent, greater than the levels of trust in the church.

These are impressive changes. Back in late 2018, nearly 30 per cent of Belarusians favoured the state media, with just under 11 per cent choosing independent media. And just as more and more Belarusians are now consuming independent media – turning to outlets such as Zerkalo.io (formerly Tut.by), Belsat, Nasha Niva, Radio Liberty, Reform.news, and others – the popularity of social platforms, including Telegram, YouTube and Instagram, has also surged.

As independent media enjoys greater support among Belarusians and plays an ever-more critical role in society, the Belarusian regime continues its crackdown. As of December 2021, a crackdown on print and online media extended to over 300 Telegram channels labelled “extremist” by the Belarusian regime, and virtually all independent media face restrictions and are also listed as “extremist”.

As the Belarusian Association of Journalists and the Justice for Journalists Foundation have documented, and EUvsDisinfo has highlighted, the “Lukashenka regime’s goal is painfully clear: there can be no independent media”.