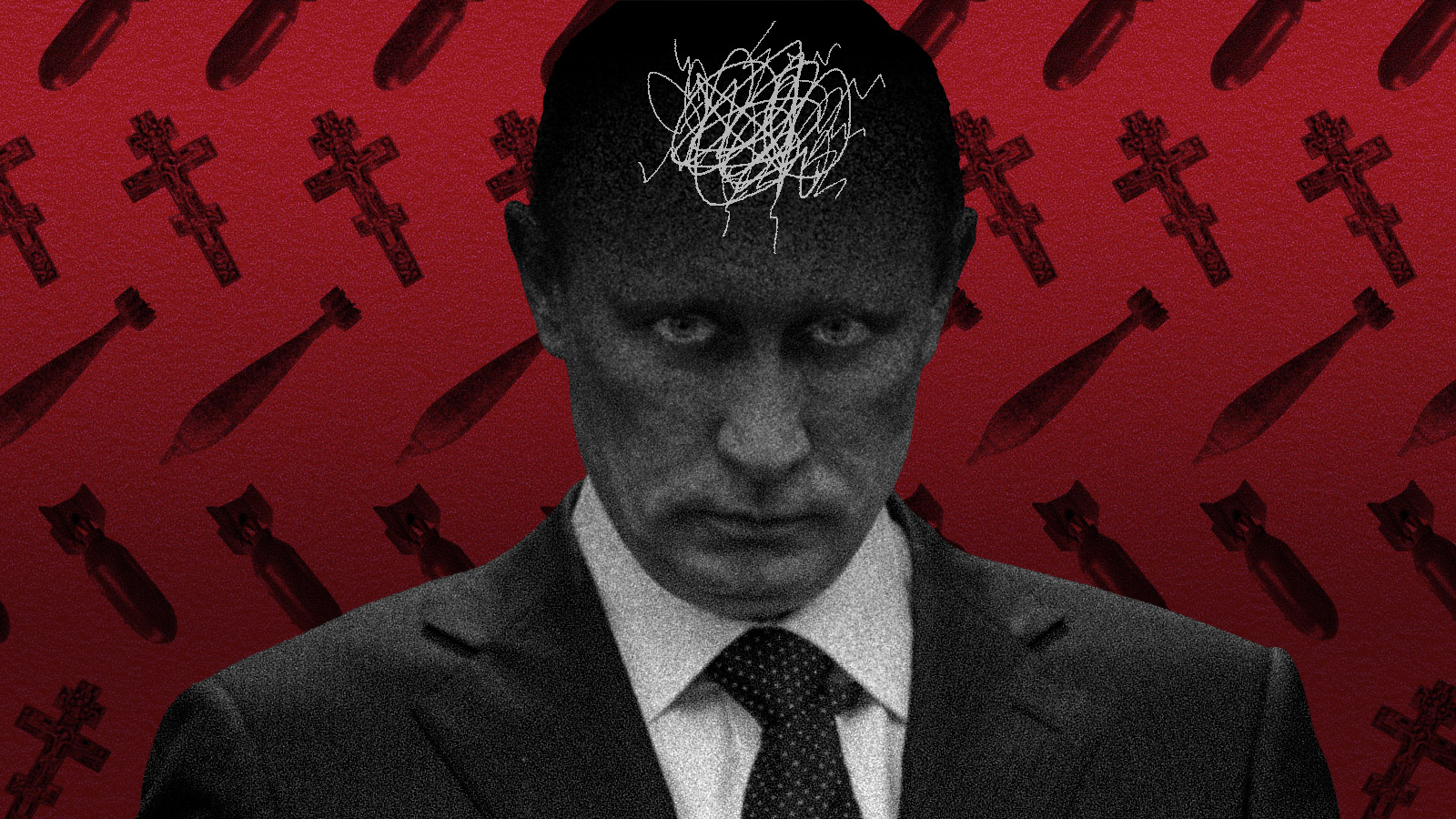 The joy of bombing – but hide the joy a bit

While much of the world watched with horror and condemnation as reports came in about Russian missile attacks on Dnipro and other Ukrainian cities during 15-16 January, the Kremlin media machine put on another display. During 19 minutes of war reporting, the main Russian TV news on Saturday spent 12 seconds covering the horrific missile attack on residential homes that has already claimed more than 44 civilian lives.

Those 12 seconds were filled with generic footage of traffic in Dnipro at night. The presenter quickly claimed that confusion reigns about what happened, but Ukrainian forces are to blame because they have a habit of shooting at Ukrainian targets or being unprofessional. For example, they drop their missiles on Polish territory, the presenter said, alluding to an incident on 15 November 2022 when a Ukrainian air defence missile intercepting a Russian missile attack fell on Polish territory. Other footage from 26 February 2022 was shown to confuse and distract attention. 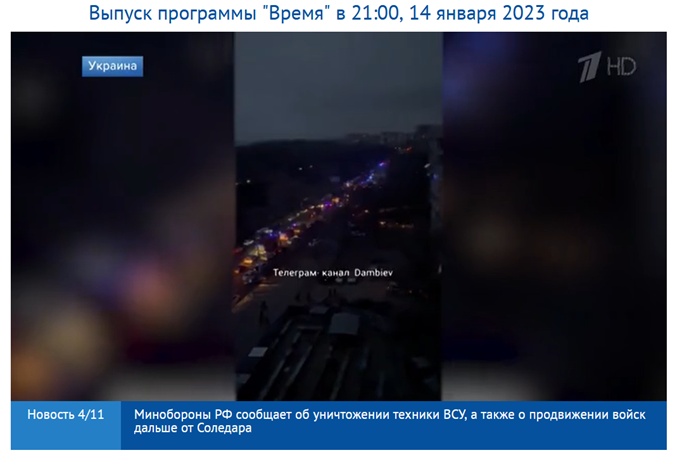 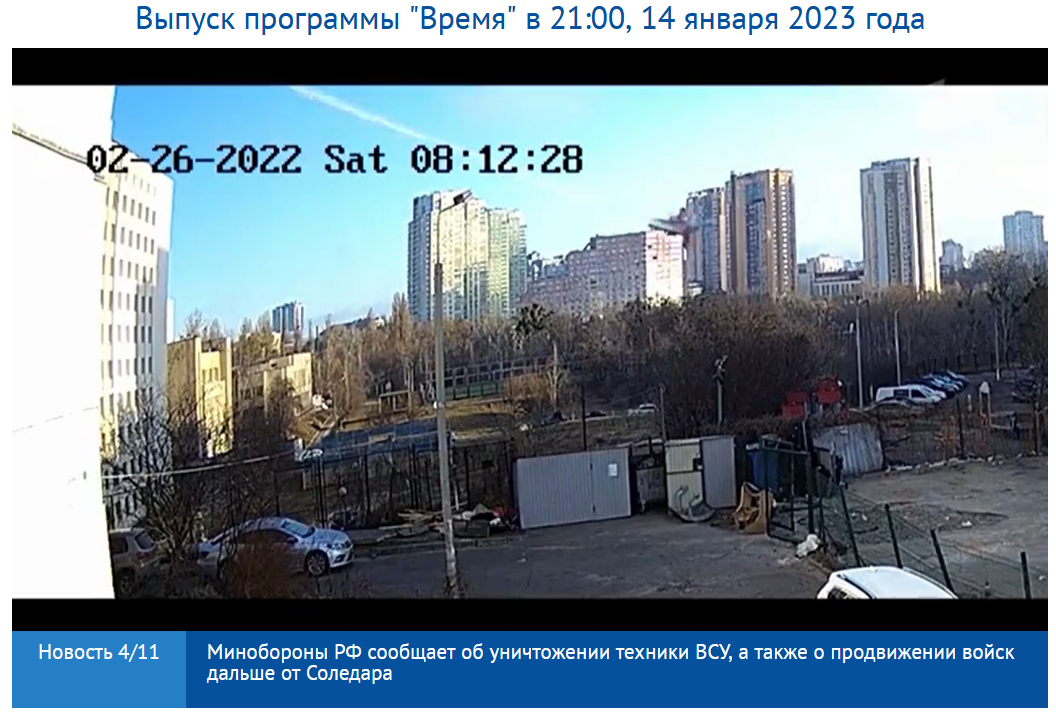 The presenter soon moved on. Other stories featured triumphant footage from Russian forces in the town of Soledar, separatist leader Denis Pushilin talking about Donetsk while repeating tropes about ‘neo-Nazis in Kyiv’, and a story about how badly Western military equipment performs, especially tanks. The same template followed on Sunday, only with more juice. Topics included US nuclear plans against Russia and threats against the Orthodox faith in Ukraine. More about the latter below.

Why not show footage of the bombing?

The weekend attacks on Ukrainian cities including Dnipro laid bare a set of paradoxes. It should come as no surprise that pro-Kremlin outlets manipulate footage or neglect obvious news material, failing to act as professional reporters. But this week’s manipulation and neglect is at a remarkable level 11 months into the war and after hundreds of Russian missile and drone attacks on civilian Ukrainian targets.

The Kremlin’s media machine is usually not shy about showing dramatic, blood-dripping footage. Why not show this bombing and, as usual, brag in a triumphant tone about the ‘nationalists’ being hit? Was this incident over the top? Too many civilian casualties? But if the blame is put on the ‘unprofessional Ukrainian air defence’ then why not enjoy demonstrating this to a Russian and world audience? Something doesn’t feel right, even if the ‘special military operation’ (code for: war) is splashed across the media landscape in Russia.

The implied message now featured across the Russian media landscape and pro-Kremlin ecosystem can be summarised as:

– To the West: Don’t send weapons. Either Russia will react with nuclear strikes (see Putin’s many speeches) or clumsy Ukrainians will use the weapons on their own people.

– To the Russian audience (a mixed message): don’t worry, Western weapons are scrap. At the same time, join the ranks of those defending Russia in this existential battle for the survival of the Russian state and culture.

The US is the eternal enemy of Russia

Another constant topic in Russian disinformation is that ‘the US has a plan for the destruction of Russia’, plain and simple. This week, the volume was turned up a notch with the claim that the US planned to drop up to 300 nuclear bombs on the Soviet Union and only the USSR’s acquisition of its own atomic bomb in 1949 prevented it from doing so. It was presented as if it was just about to have happened. 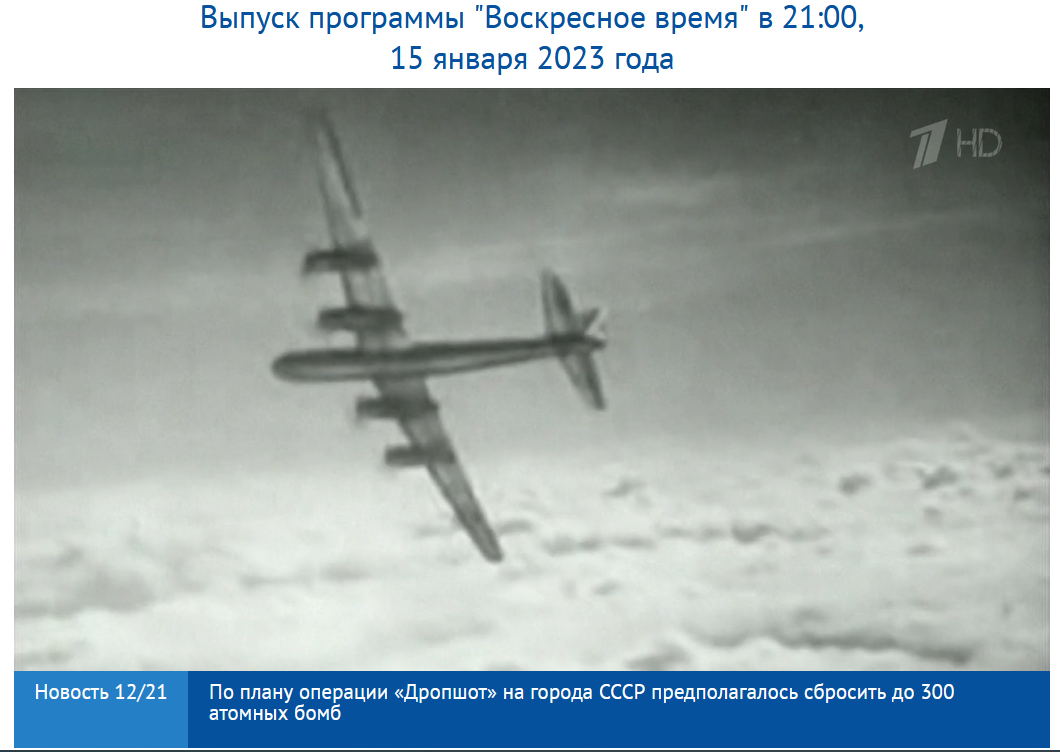 Bravo Soviet science! A message to today’s Russian industry: be patriotic, invent! Militarise! For the people, another dose of USSR nostalgia: cherish the glory of superpower nuclear status! Be on guard and unmask the hidden agents of the US and the West. Therefore the foreign agents list is necessary so no secrets slip out. In reality, this thinking is shorthand for censorship.

Fast forward to the present day: the US and NATO are forcing Ukraine to fight Russia. This disinformation is designed to drive a multi-split wedge. The first wedge is between Ukraine and the West. The second is inside Ukraine between the people enduring the war’s hardship and its alleged puppet leaders serving Western masters. See also: the US pushed Ukraine to war, with the twist here that the West is using Ukraine to fight Russia and the money spent is gigantic and unsustainable. According to pro-Kremlin outlets this week, the sinister plans of Kyiv leaders and their Western masters can be summed up as, ‘going nuclear, going dirty’.

Engage the Orthodox faith and fire it up – with lies

After the New Year, pro-Kremlin outlets turned to religion by featuring stories with an apocalyptic tone. Russian state TV used dramatic footage to suggest that a Russian Orthodox church in the Volyn region in Ukraine had just been burned down. In fact, it was old footage from a December 2021 fire in the Dnipropetrovsk region, months before Russia’s February invasion. See below. Local Volyn authorities could report that no fire has been registered in any church in the area. See here or here. 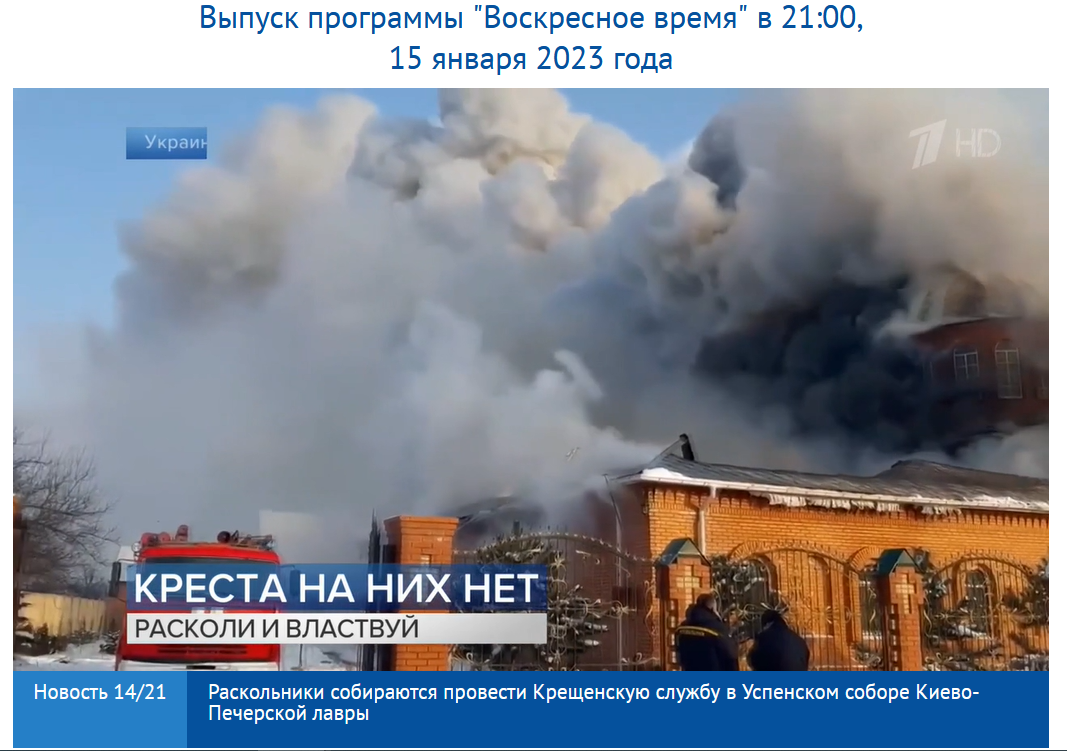 This fake use of a church fire again illustrates how Russian state media outlets work, recalling the fabricated story from July 2014 of the almost-world-famous crucifixion of a young boy in Donbas by Ukrainian forces. It was all lies, performed by a Russian actor and filmed by the Russian Channel One, designed to stir up anger against Kyiv – see our account here.

Today outlets are combining the church story with explosive claims that the Ukrainian government is pursuing a neo-Nazi attempt to annihilate the Orthodox faith in Ukraine. Orthodoxy is understood as the monopoly of the Moscow Patriarchate, while the Ukrainian Orthodox church is dismissed as a ‘pseudo-religious institution’. Commentators added fuel to the fire by alleging that the US is behind the plan to split the churches and copy the policy of Adolf Hitler himself by striving for an ‘Imperial Church’. Pro-Kremlin outlets have long denigrated the Orthodox Church of Ukraine. See examples here.

The Moscow Patriarchate, which blesses the war, and the Russian government cannot accept that the Ukrainian Orthodox Church is a full-fledged church in its own right. The Church received the tomos of autocephaly in January 2019 and has been officially recognised by the Ecumenical Patriarchate and several other churches. Since the Kremlin considers Ukraine an artificial construct and a wrong-headed historical experiment by the Bolsheviks, then there can be no real church either. This is nothing but classic religious supremacy-imperialism anno 2023.

Threat of a Western invasion of Russia and Belarus…hmm

This week, outlets also conjured paranoia of a Western invasion. Poland, a top-tier target of Russian state and pro-Kremlin disinformation attacks, together with the Baltic states are conducting a military build-up which is preparation for an attack. It is a long-held, wild claim in the Kremlin ecosystem that Poland wants to annex parts of Western Ukraine (see examples here) but supposedly Warsaw is now also planning to go for Minsk.

The logical response for the Kremlin is a joint military exercise between Russia and Belarus. So the exercise was launched this Monday with the added caveat from Minsk that ‘Belarus is also ready to respond eventual threats from Ukraine’.

Don’t be fooled. Moscow wants to develop a credible military threat to the north of Ukraine so as to either tie down Ukrainian forces away from the southern front or to re-launch army operations from Belarus, like in February last year. Moscow’s assurances that ‘this is only exercises, we don’t invade’ ring hollow.

Likewise: ‘we are ready for peace negotiations just not with Zelenskyy’. See our account here. Never trust anything until the Kremlin has denied it. 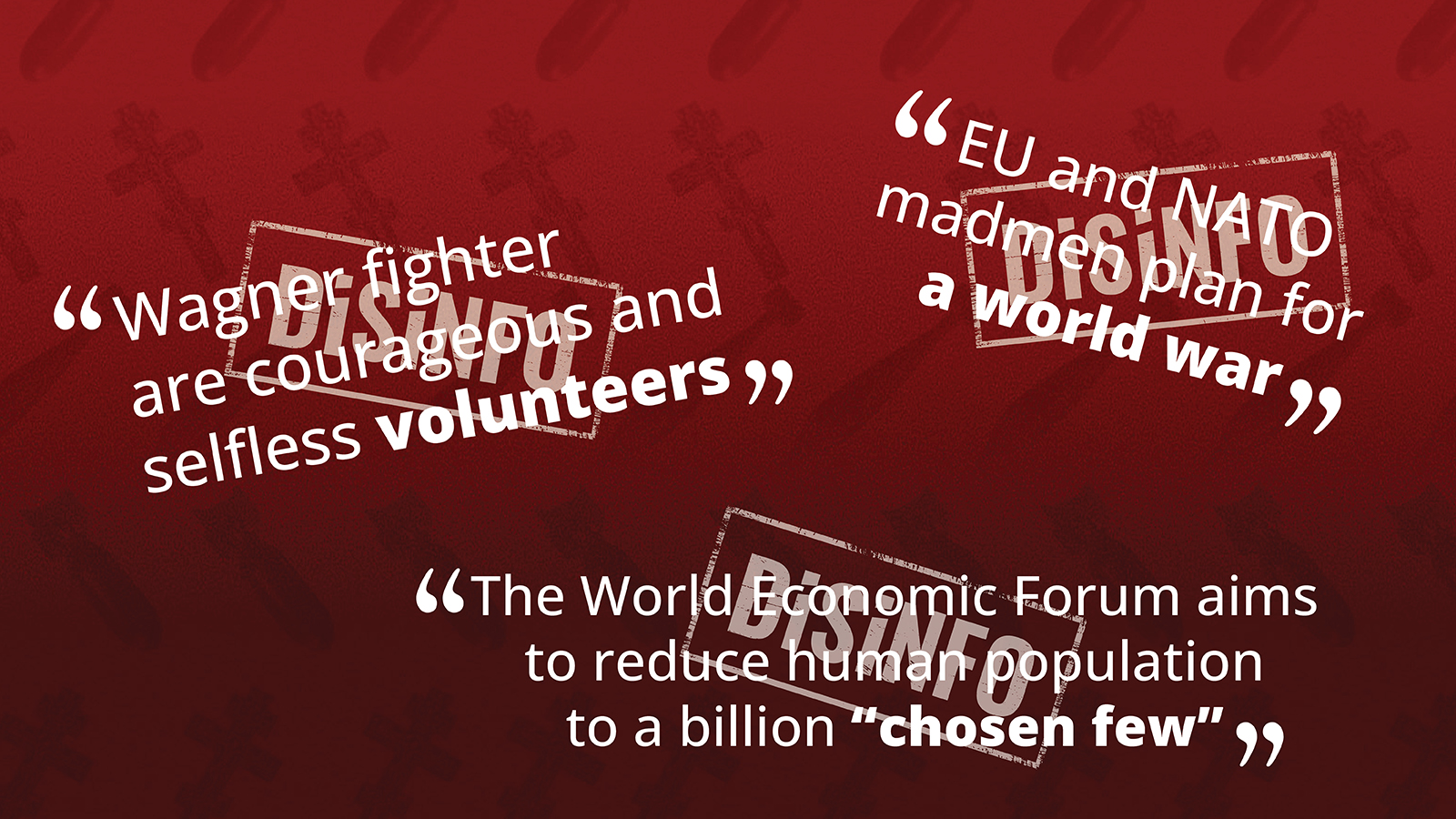 Also on EUvsDisinfo’s radar this week