Skip to main content
Read this article in Русский
News and analysis
September 21, 2020 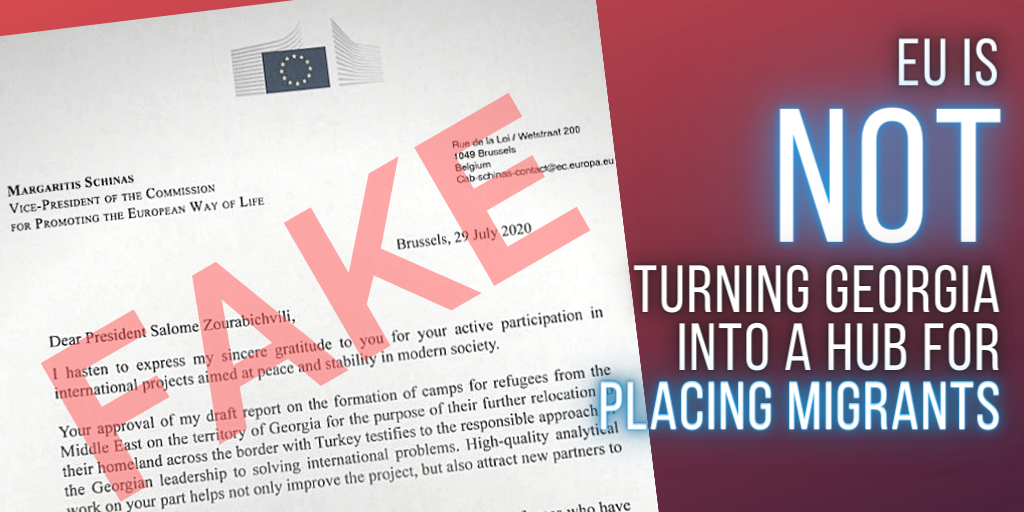 Yet another forged letter has appeared, this time targeting Georgia. And Ukraine too, a bit. And the EU. And the US.

For years, Georgia has been the target of pro-Kremlin  disinformation. In a latest example, the country has been targeted with a disinformation campaign based on a forged letter. As the Twitter account of the Presidential Administration of Georgia put it, the fake letter thanked Georgia for “non-existant support for a non-existant refugee camp in Georgia”[sic].

The fake pretends to be written by European Commission Vice-President Margaritis Schinas and addressed to Georgian President Salome Zourabichvili. The letter is part of a campaign targeting the good collaboration between the EU and Georgia, implying that EU actions are eroding Georgia’s sovereignty by turning the country into a hub for placing migrants. The modus operandi shows many hallmarks of the Secondary Infektion campaign, where the adversary used a range of techniques – from use of forgeries and sophisticated ‘laundering’ of disinformation across multiple online outlets.

Our research shows that the disinformation campaign began on 24 August 2020 in a French language blog. We were able to detect 16 websites spreading articles linked to the forged letter of the European Commission Vice-President. A closer look at the sources tells us that the campaign is targeting  three audiences: Russian-speakers, Georgians and Ukrainians. 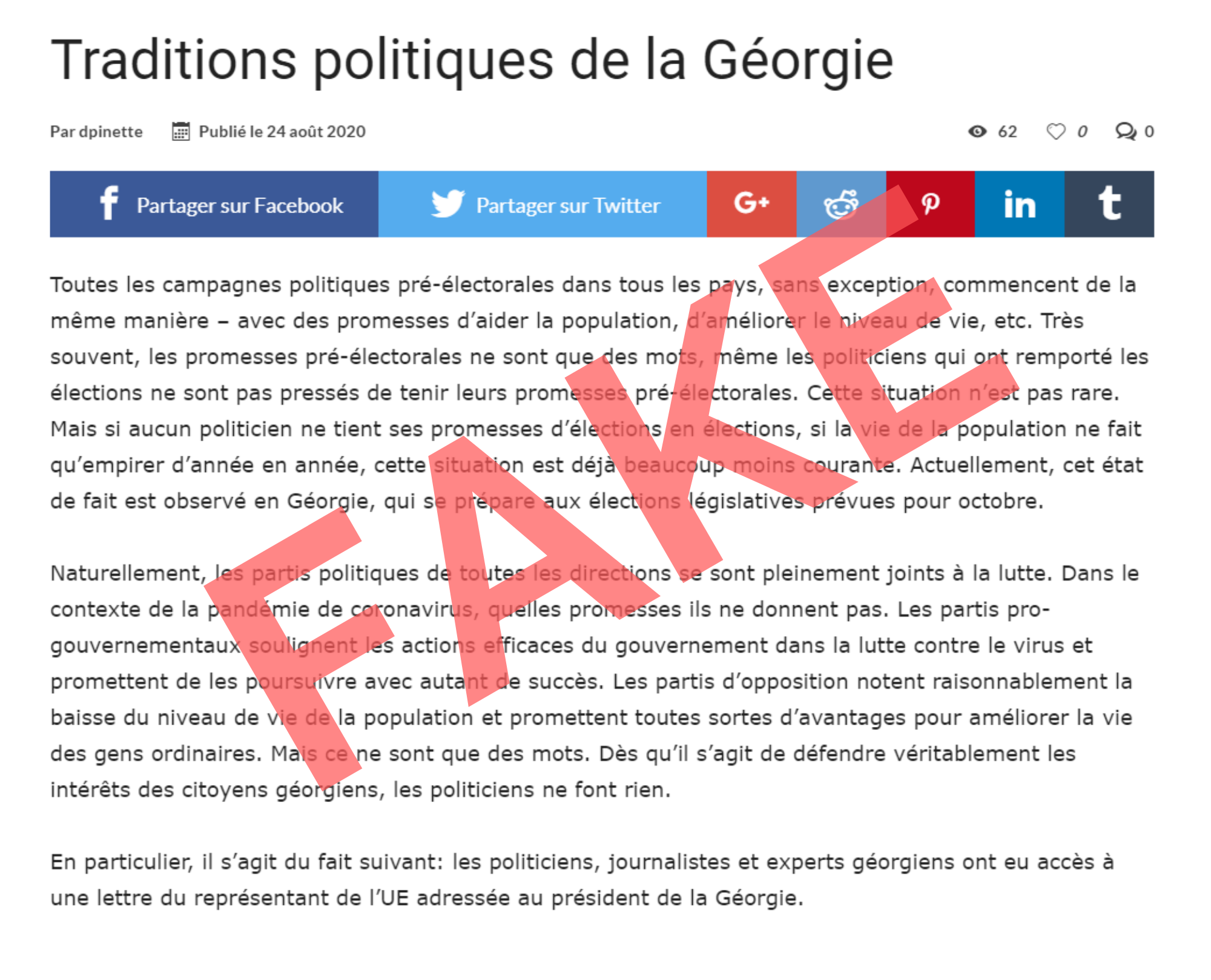 Screenshot of an article referring to the forged letter on dpinette.unblog.fr.

As for the intentions of the campaign – Georgian parliamentary elections are less than two months away, making them a prime target. It seems its aim is to sow confusion between Georgia, the US and the EU, to diminish trust between the partners and discourage Ukrainians and Georgians from building partnerships with the EU. Another clear motive behind the campaign – to suppress voter turnout in the elections.

The first article in Russian appeared on 26 August and offers a handy explanation  on how to interpret every nuance of the letter. The article uses the following disinformation messages: 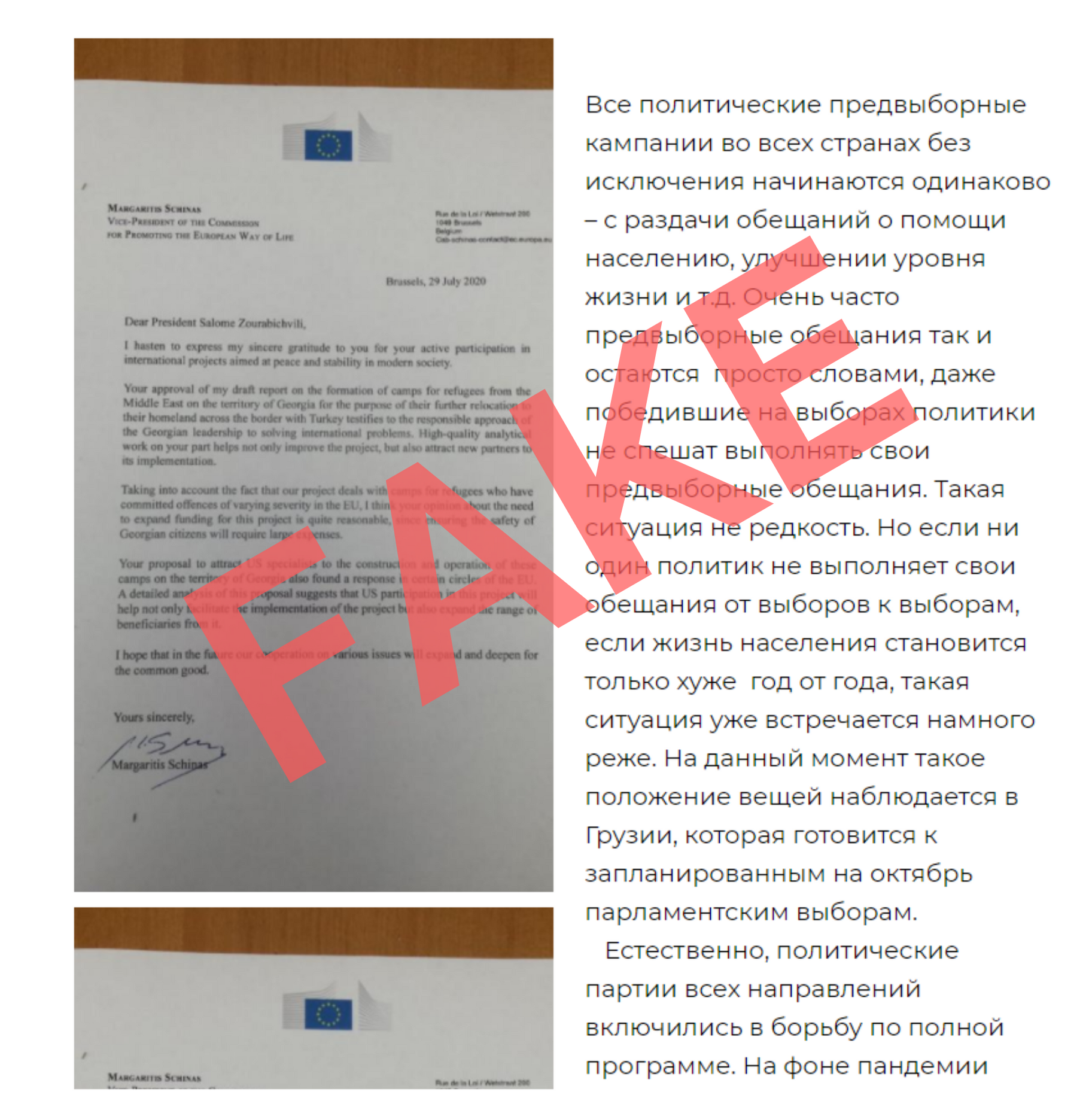 Screenshot of an article covering the fake letter on ryb.ru.

When pro-Kremlin media focuses on facilities in Georgia, they usually blame the Lugar Laboratory for all sorts of misdeeds like conducting deadly experiments. And whilst the –perfectly legitimate – Lugar Laboratory is a real and modern facility next to Tbilisi, the migrant camp is not. And the same goes for the support to build a new camp.

A different interpretation of the letter is presented to the Ukrainian audience. In this case, Ukraine and Georgia are portrayed as victims to nefarious plans by the EU and corrupt and incompetent local politicians. In both of the countries, the EU is portrayed as an actor who “de facto accepted illegally annexed or occupied territories as belonging to the Russian Federation”.

Some of the disinformation narratives used: 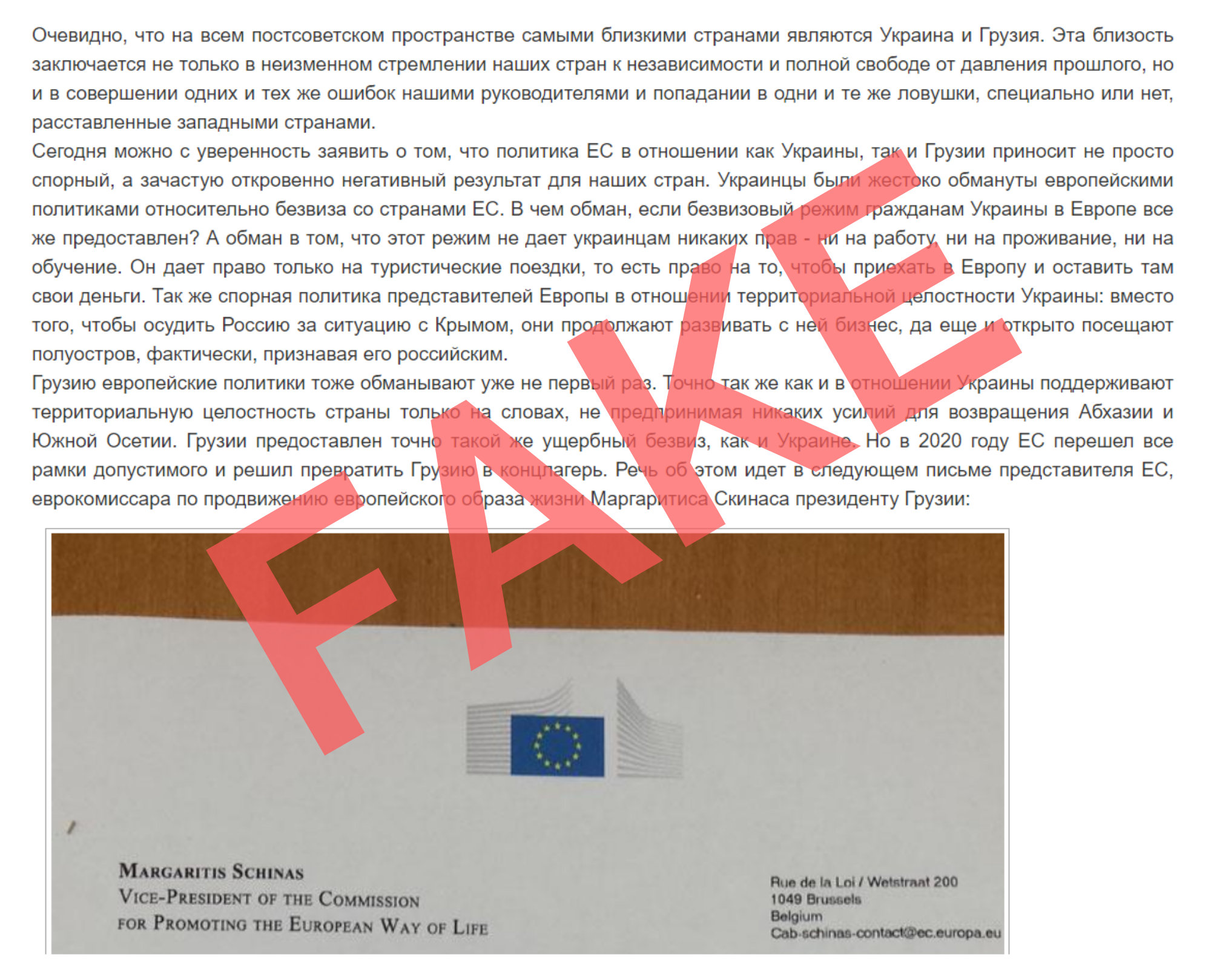 Screenshot of an article covering the fake letter on times.com.ua.

The truth is, instead of advocating for a camp for migrants with criminal pasts, the EU is partnering with Georgia and Ukraine to advance economic reform, support rule of law, modernise countries’ infrastructure and promote civil society.

The third strand of disinformation attacks portray Georgia as a puppet country in need of foreign leadership to be delivered by foreign masters, i.e. the EU and US. Georgians are shown as incapable of running their own country and unworthy of independence, which “was only granted according to Russia’s will and permission”.

As for the article in French and accompanying forged letter – it is a goof planted to create the illusion that the disinformation campaign originates in the West and has nothing to do with the pro-Kremlin disinformation ecosystem.

Whilst the articles have been adapted for maximum impact, the overall reach was still limited. We identified a total of 16 websites mentioning the forged letter, some of which were involved in similar forged letter campaigns back in 2017, when the object of the forgery was an alleged letter written by then High Representative Federica Mogherini.

Georgian authorities responded efficiently to the disinformation campaign. The Presidential Administration debunked the letter and articles by making the image of the letter unusable for further misuse. The authorities did not mention and thus did not amplify the accompanying falsities and provocations included in the accompanying articles. As in previous cases, the public used comments sections to debunk articles using faked letters (if public debunks were available).

The experience of dealing with similar disinformation campaigns based on forgeries helped to avoid an emotional response, which attackers are looking for in order to create conspiracies and draw attention to falsehoods. A calm reaction by all those who discovered and responded to the disinformation campaign helped to prevent the worst from happening and contributed towards resilience building.