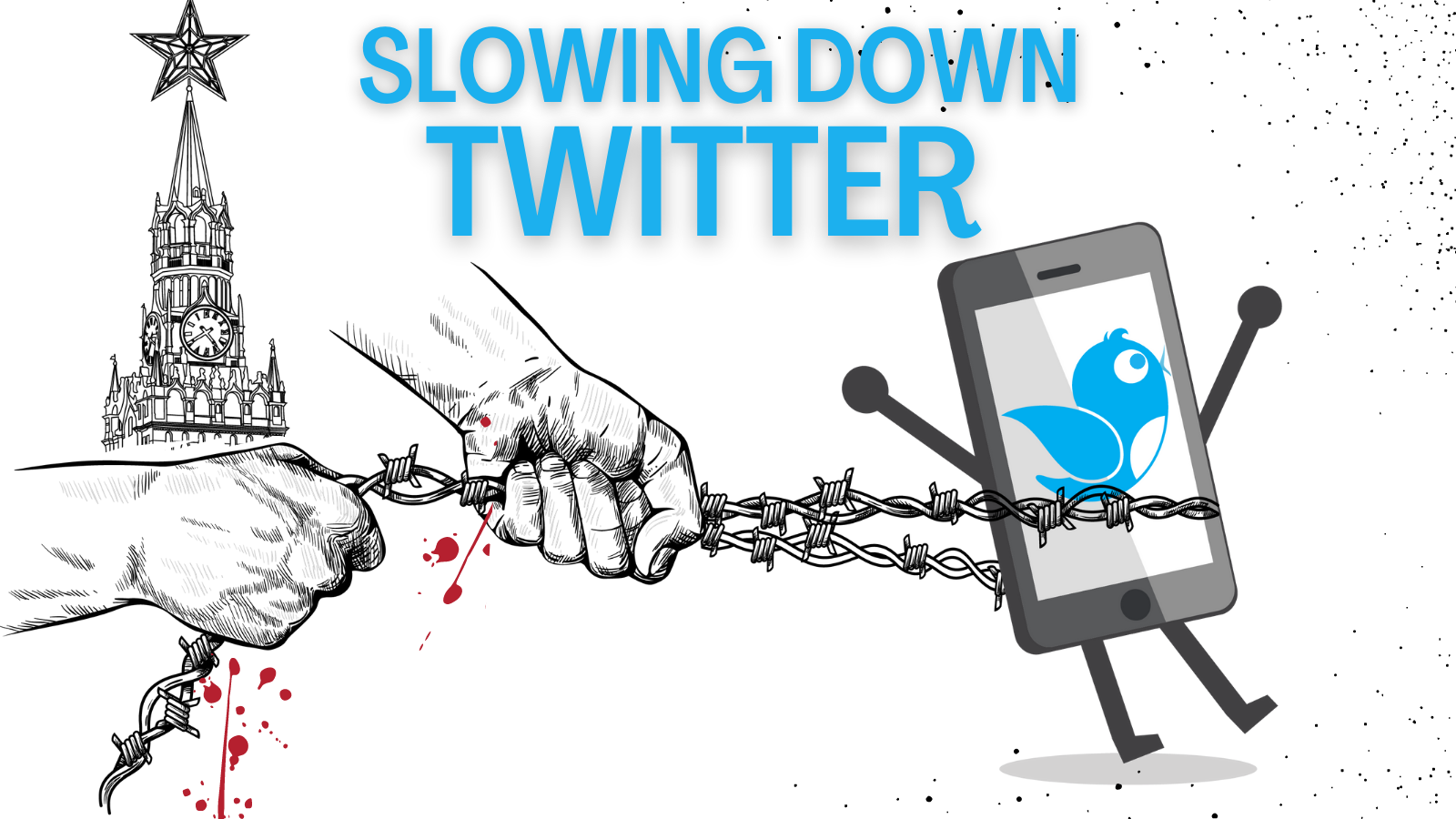 In November 2019, Russia adopted a law on developing a sovereign Internet. Recently, the Russian telecom watchdog Roskomnadzor declared that access to Twitter, after the company’s violation of Russian law, should be “slowed down”. On 10 March, the agency pulled the trigger. As a result, most Russian state agencies were temporarily blacked out, while Twitter was unaffected.

Roskomnadzor decided to “slow down” Twitter in Russia, even opting for blocking the access to the service. As soon as the decision was executed, Internet users started to report on issues with the site of the Kremlin, the Cabinet of Ministers, the Parliament, the Ministry of Internal Affairs, the Bureau of Investigations and an entire row of other ministries and agencies. The Telecom operator Rostelekom went down, just as the site of Roskomnadzor itself.

So, what happened? Exactly what caused the black-out is not clear, but a theory is that the code used in the programming for impeding Twitter was too blunt. A tech magazine describes the issue:

Experts who spoke to Rest of World said they may have identified at least a partial explanation for the disruption. When the Russian government tried to block t.co, Twitter’s link-shortening service, it looks as if it accidentally blocked any site including the characters “t.co.”

Roskomnadzor itself denies anything similar and blames a faulty router.

This was not the first time a repressive Roskomnadzor action against the web backfired. Three years ago, the intrepid Agency restricted access to the Telegram messenger service. The move proved to be a magnificent failure. Russians could simply access Telegram through VPN software and users kept using the service without paying attention to the Roskomnadzor’s block. The restrictions were finally lifted in the summer of 2020, as the Russian government needed an efficient channel for distribution information on measures to curb the pandemic.

Shutting down fora for dissent and discussion is an efficient way of impeding the public discourse. The method has been tested frequently and across the world by autocratic regimes.

Despite the limited success in the recent attempt to curb Twitter, Roskomnadzor is undeterred. The vision of a sovereign Internet is still alive and the agency warns that Twitter might be entirely blocked in a month if the platform does not comply with the agency’s demands: removing content on child pornography, drug abuse and encouraging suicide – but also a closure of the accounts of Council of Europe’s Schools of Political Studies and the accounts of the dissident Mikhail Khodorkovsky’s media group MBKh Media.

Cutting off Russia from the web is, in the views of the Kremlin, an act of self-defence. The independent journal Republic comments on the attempt to shut down Twitter:

The Russians need to be protected against the Russians, because the Russians are stupid. Fewer and fewer are wise enough to understand that real happiness lies in never-changing leaders and in the necessity of allowing certain people grow deeper into their comfy chairs. This is the deepest meaning of the war against the social media platforms. We have merely seen the first, clumsy beginning of it.

The administrators of Twitter have failed to remove content, ignoring warnings and letters from Roskomnadzor. The violations are not any abstracts legal norms, but consist of real threat to the lives and health of millions of Russian citizens. We are talking about calls for suicide, information about how to obtain narcotics and child pornography.

So, cutting off the wires to the Big Bad Social Media to save the children. But the key argument for impeding the access to Internet is to secure the current organisation of the state. Republic writes about a myth which strongly rooted among the Russian leaders:

Blocking information was one of the KGB’s most important methods and on the fundamental elements of the Soviet regime. That is why glasnost became such a lethal blow to the regime. The current rulers of Russia have their background in the KGB and seem to believe that were it not for the reforms of Gorbachev, the Soviet Union would still have existed. That is why they consider it important to freeze down the country, kill any remains of glasnost and limit any independent source access to the information market

The editor-in-chief of the RT and Sputnik, Margarita Simonyan, expresses in an interview on a Moscow radio station strong support for limiting the access to information:

All foreign social media must be closed. Carthage must be destroyed. Foreign social networks are an instrument of a war against Russia, a weapon that must be forbidden. No one lets foreign tanks into its country – this is idiotic, but we did it. They must be forced out and then we need to big even better, more powerful tanks. 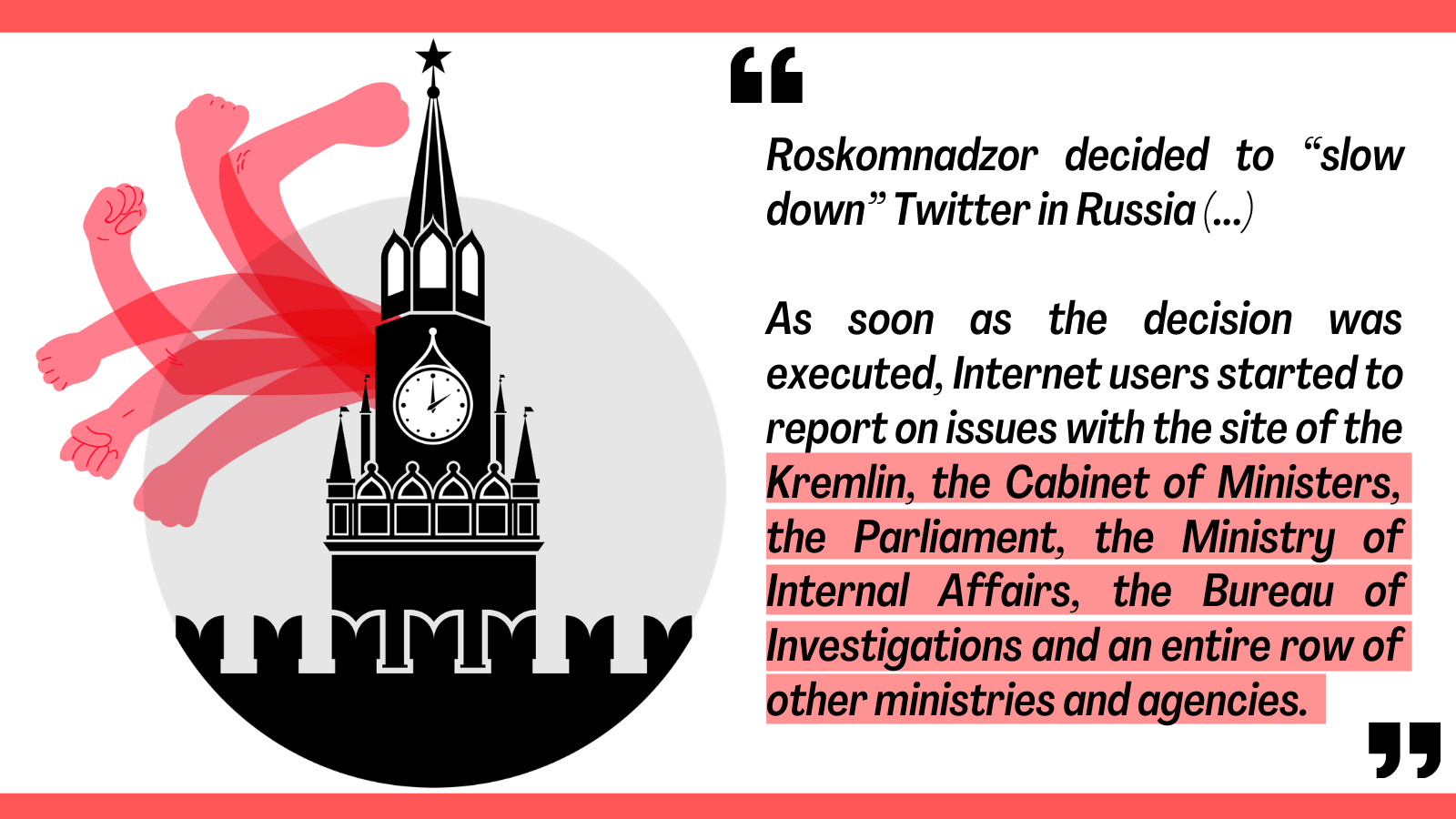