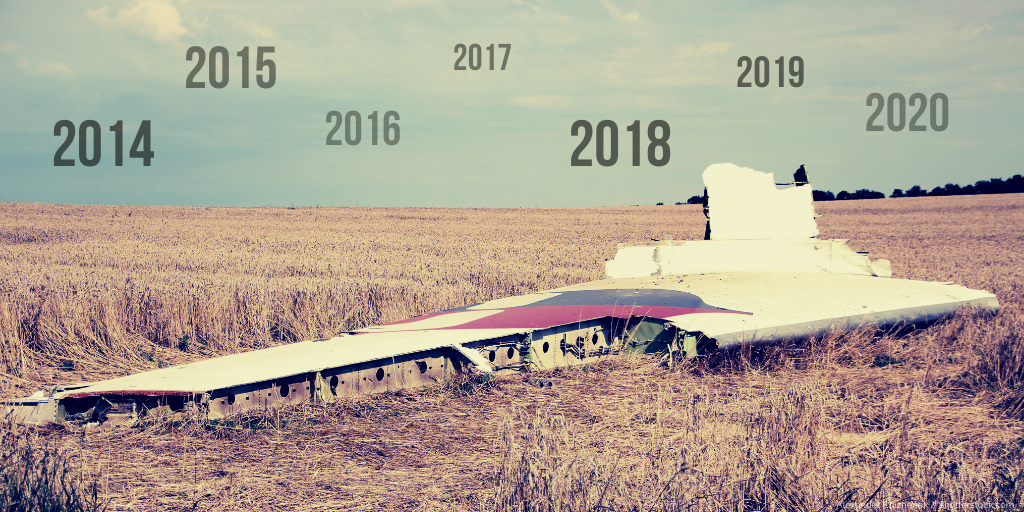 On the 17th of July, 2014, a BUK missile system, transported from Russia to a field in Eastern Ukraine shot down Malaysian Airlines flight MH17, killing all 298 people on board.

The most recent example came earlier this month, when the Russian Ministry of Foreign Affairs praised a book, published by an obscure Malaysian author, claiming that the “Jewish Antichrist Illuminati” were responsible both for the MH17 and MH370 tragedies. 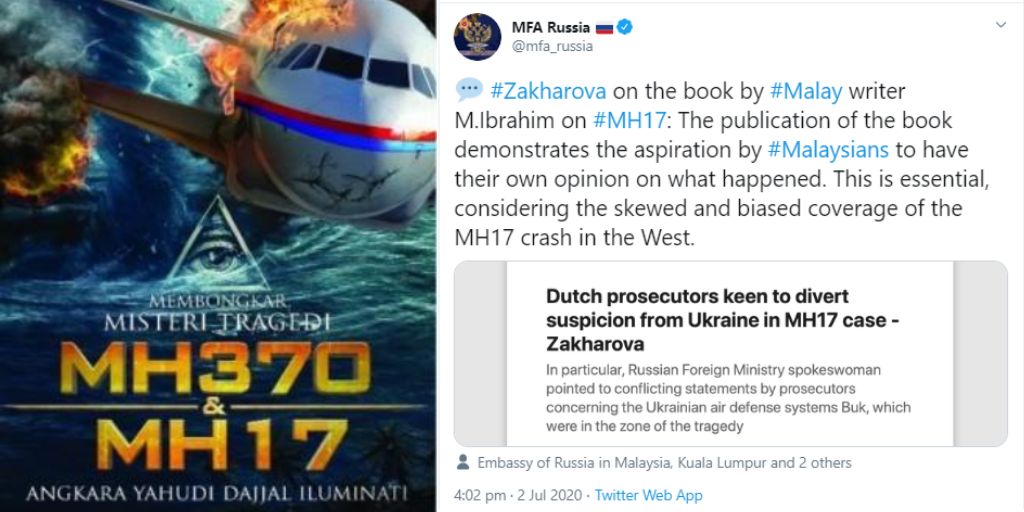 But before the “Illuminati” conspiracy, there were bogus leaks, choreographed interviews, attempts to link the MH17 to coronavirus and much more – all in a relentless effort to undermine the Joint International Investigation (JIT) and the court proceedings.

Below is an overview of pro-Kremlin disinformation about the MH17 this year.

In September 2019, Ukraine and Russia exchanged prisoners.  Among those who went to Russia was Volodymyr Tsemakh, a former commander of air-defence in Ukrainian territories controlled by Russian-backed rebels. As such, he was a person of interest in the Joint International Investigation. A few months following the prisoner exchange, Russian state-controlled TV aired an interview with him, claiming, among other things that the Dutch and Australian investigators tried to bribe Mr. Tsemakh, “by offering witness protection, citizenship and a house in Holland”.

The interview proved to be a goldmine for pro-Kremlin disinformation, complete with jokes about DIY air-defence systems cunningly devised by Mr. Tsemakh trivialising the MH17 tragedy, and thunderous declarations of the EU-sanctioned Dmitry Kiselyov, that the Dutch and Australian investigators were “fabricating” the case.

In the final twist later that year, the Public Prosecution Office of the Netherlands said that Russia refused to execute the Dutch request for extradition and  willingly allowed Mr. Tsemakh to leave the Russian Federation (reportedly to his residence in East Ukraine, from where he cannot be extradited).  To which the pro-Kremlin media answered that the Kremlin had nothing to do with the person it included in a landmark prisoner exchange just a few months prior.

2020 started with yet another aviation tragedy, after Iran shot down a Ukrainian passenger jet, killing all 176 people on board.

The pro-Kremlin media were quick to claim that the West was demonising Iran, and blame Western secret services, a US spy drone, and US secret weapon for the crash. However, when Iran eventually accepted its responsibility for downing the civilian plane, pro-Kremlin media was put in an awkward position.

In the comparison of how the Kremlin and Iran handled the two incidents, journalist Christo Grozev wrote, that the MH17 lies have inflicted “irreparable cost of Russia’s international reputation. Without owning up to its mistake, it [Russia] will forever be remembered as the country that just kept lying”.

In early February, the Russian Institute for Strategic Studies, RISS, a Kremlin-funded think tank, published an essay titled “Securing Information for Foreign Policy Purposes in the Context of Digital Reality”. The paper claimed that:

As the date of the first hearing of the MH17 criminal trial on the 9th of March, 2020, approached, the method of “preventively shaped narratives” was highly visible. A few weeks before the trial, multiple pro-Kremlin outlets published sensational news pointing to “new leaked documents” allegedly proving that there weren’t any BUK missile-systems in the area of the crash. The Kremlin spokesperson used this as an opportunity to declare that “Russia was right” and accuse the international investigators of bias against Russia.

The sensational findings were almost immediately debunked by independent Russian journalists at the Insider and Meduza, who simply called the pro-Kremlin revelations “bupkis”.

But the pro-Kremlin media kept trying to occupy the information space: the coronavirus may be used to commit frauds against Russia in the MH17 trial, the investigators were planning to violate Russia’s sovereignty, the outcome of the trial is predetermined, the entire evidence is drawn from the media…

Looking at over 260 examples pro-Kremlin disinformation about the MH17 collected in the EUvsDisinfo database, no lie seems to be too trivial in the Kremlin’s long game of denial and obfuscation.

Last week the Dutch government brought Russia before the European Court of Human Rights, for its role of downing the flight MH17. The move will help the individual cases brought by victims’ relatives in their pursuit of justice.

Throughout the painstaking six-year investigation, the Joint International Team revealed the extent of Russian administrative, financial and military influence on militants in Donbas, thus dismantling one of the core disinformation narratives of the pro-Kremlin media about a “civil war” in Ukraine. It is expected that the incontrovertible evidence that Russia directly engaged in war in Ukraine will become public this autumn.

As the criminal trial over the downing of the flight MH17 irreversibly moves forward, it is becoming increasingly apparent that the pro- Kremlin media are losing in their own game of lies.