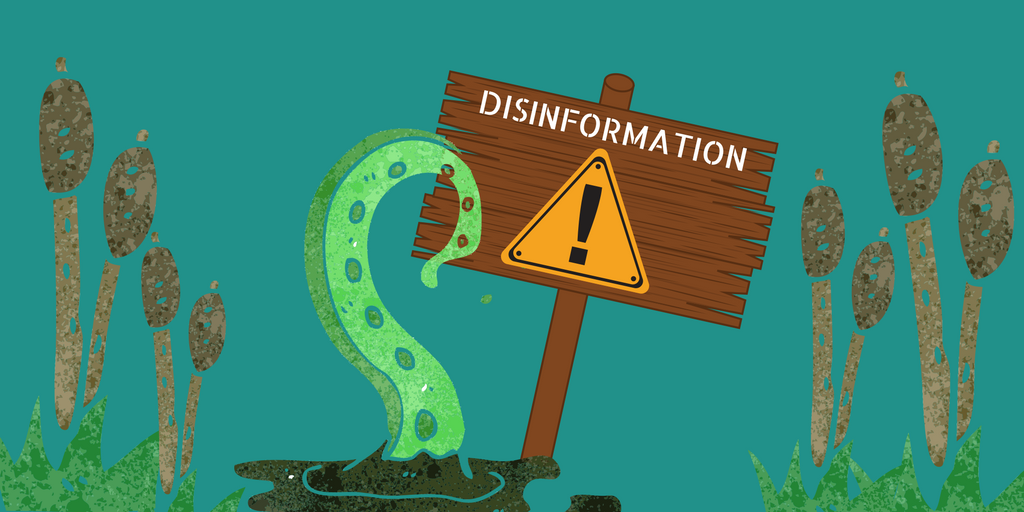 The Grimpen Mire – the treacherous marsh in the famous Sherlock Holmes mystery “The Hound of the Baskervilles” – was evoked by the Russian MFA’s spokesperson this week, as she dismissed the British parliament as a circus show in reacting to U.K. condemnation of the poisoning of Sergei Skripal. “The Grimpen Mire still holds its secrets”, she observed.

The Mire is described as “a vast bog that creates awe, dread, and a feeling of primacy”, and as having “patches into which one may sink with no guide to point the track.” As such, it is in fact an apt description of this week’s disinformation landscape.

Pro-Kremlin outlets went into overdrive in response to British Prime Minister Theresa May’s statement blaming Moscow for the poisoning and attempted murder of former Russian spy Skripal on British soil. Mr Skripal remains seriously ill in hospital along with his daughter and a British policeman called to the scene.

What was striking was how the stories – some appearing on the same state-controlled news outlet but completely contradicting one another – peddled multiple, unsubstantiated and often absurd conspiracy theories. This is perhaps the most classic of pro-Kremlin disinformation techniques: to confuse the wider audience and at the same time to feed a loyal audience of disinformers ready to defend Russia with abundant lines to take. The resemblance is very clear to previous instances when Russia was identified as the perpetrator of a crime: for example the MH17-case and the bombing of the humanitarian convoy in Syria.

In both instances, pro-Kremlin disinformation was quick to dismiss, distort, distract and dismay.

It was no surprise, then, that “Russophobia” was one of the top explanations given by Russian state-controlled TV in the Skripal case. This is one of the most common of responses to any accusation levelled against Russia.

Leading state TV channels in Russia told viewers that the former spy had in fact been poisoned by the United States in order to discredit Moscow and spread Russophobia; that the West was blaming Russia for the poisoning in order to justify sanctions and that the incident was a provocation by the West ahead of the Russian presidential election on Sunday. Sputnik joined in reinforcing the narrative of “anti-Russian propaganda”.

Another popular disinformation theme resurfaced when state-controlled TV suggested that the UK had staged the attack on Skripal to spark a boycott of the upcoming soccer World Cup this summer in Russia. This is not the first time that sport is used for disinformation purposes. 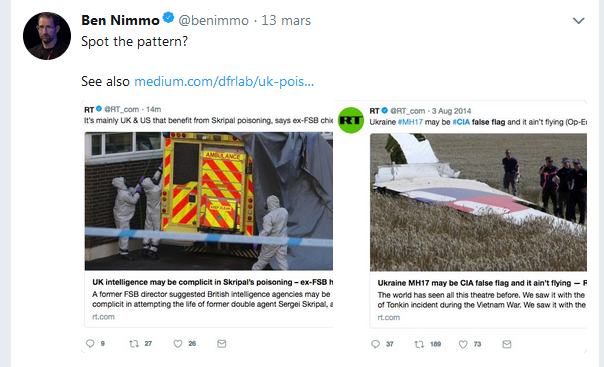 Tweet by @benimmo showing the similarities between RT:s reporting of the MH17 tragedy and the Skripal attack.

Following a familiar tactic used after the downing of MH17, Russian state outlets were quick to pollute the information space with “alternative” explanations for the tragedy.

Some claimed that Mr Skripal and his daughter had overdosed. Another explanation was that the exposure to the toxin was accidental and came from a British lab. In support, the same lab had its credibility quickly called into question by RT.

It was notable also that, amid all the focus on Russia’s use of such internationally banned weapons, a disinformation story should also appear accusing the U.K. among others of the use of chemical weapons in Syria.

But disinformation was not just aimed at confusing. It also sought to intimidate, threaten and scare – another common technique. The Russian Foreign Ministry spokesperson stated on Tuesday that Russia calls on Britain not to speak in the language of ultimatums with a nuclear power. This is not the first time representatives of the Kremlin have used similar language towards European countries.

In addition, Russian state media claimed that “the traitor had it coming” when reporting on the Skripal case. Many newscasts introduced him as “Traitor Skripal,” echoing the words from Putin’s infamous interview: “Traitors always end in a bad way.”

While other countries expressed solidarity with the UK Government, the Russian Foreign Ministry’s official Twitter feeds mocked the British government with the hashtag ‘HighlyLikelyRussia’, as catalogued by the DFRLab.

It can be hard to find your way out once you are in the disinformation swamp. Don’t step into it.

Date
Title
Outlets
Country
Americans poisoned Russian ex-spy Skripal and daughter to spread Russophobia
UK, US, Russia
UK poisoned the Russian ex-spy Skripal to stage a boycott of the coming World Cup in Russia
UK, Russia
British lab untrustworthy or complicit
UK
British authorities are exploiting the Skripal-case for anti-Russian propaganda
UK, Russia
Skripal poisoning: Provocation by the West before the Russian presidential elections
Russia
The reports of Western media on the Skripal poisoning are propaganda to justify sanctions against Russia
Russia
It was Britain that experimented with nerve agent
UK, Russia
Warning: suicide is an occupational hazard of the work of a traitor
UK, Russia
Pointing a finger at Russia regarding Russian ex-spy poisoning is Russophobia
UK, Russia
On the eve of the presidential elections in Russia, US media is attempting to split Russia and start a civil war
Russia
As long as Europe is united, it is trying to capture Russia: it happened like that, when Europe was under Napoleon and Hitler, and it is happening like that now
Russia
For 25 years, Russia has supported - artificially supported - the independence of the so-called Ukraine with the help of cheap gas
Ukraine, Russia
Either Ukraine will be part of Russia or gas pipelines will go around Ukraine
Ukraine, Russia
Russian ex-spy may have overdosed
UK, Russia
The US and the UK ordered the use of chemical weapons in Syria
UK, Syria, US
Next-generation nuclear weapons unveiled by Vladimir Putin in his state of the nation address have been designed with one goal: to save peace
Russia
The US bets on reducing the turnout in Russia's presidential elections to below 45 percent
US, Russia
No maps were used to illustrate President Vladimir Putin's announcement that Russia has a new invincible nuclear ballistic missile
US, Russia