Sputnik and RT Manipulation in Arabic: Al Rukban as a “Nazi Camp” 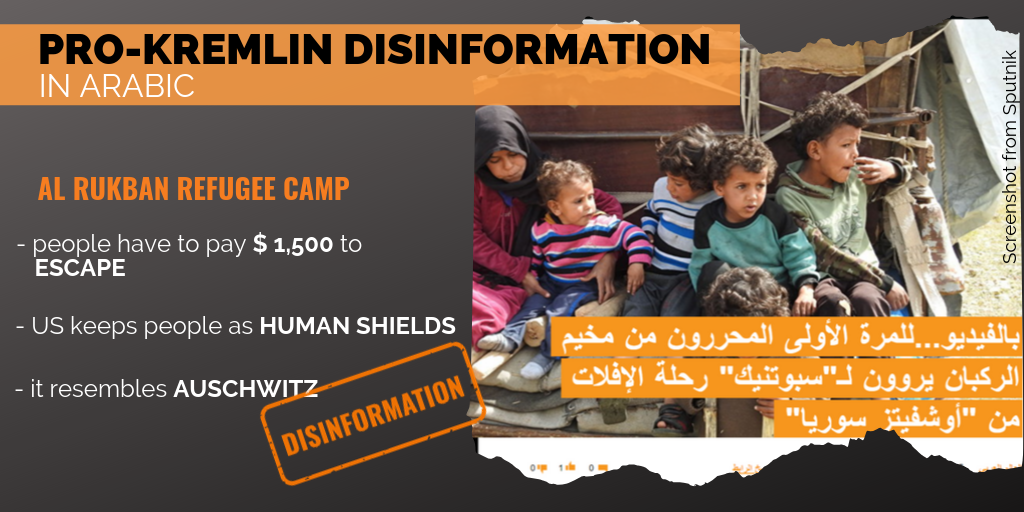 Up to 6.2 million Syrians have fled their homes inside Syria since the beginning of the Syrian conflict, and 5.6 million have been forced to take refuge in neighbouring countries. Of the 6.2 million refugees, only about 3 per cent – 170,000 people – have returned to Syria since 2016, according to UN records.

The returns of Syrian refugees and displaced people have been making headlines in Russian outlets over the past few months. The reporting seeks to speculate about and to justify the factors prompting the low level as well as the declining pace of returns.

Among the latest examples, the most striking ones have been pertaining to the Al Rukban camp located in south-east Syria. The camp was established in 2014 in the demilitarised area close to the Jordanian border to host internally displaced Syrians.

While the humanitarian situation and the living conditions of the residents of Al Rukban camp are known as dire with the camp being targeted by Assad’s forces, Russian outlets in different languages keep on demonising the United States for the situation inside the camp. See the EUvsDisinfo database for examples in English, Spanish, French and Russian here.

The Arabic language coverage repeats the same pattern. For instance, Sputnik has been presenting the families residing in the Al Rukban camp as “being held for years by US forces and armed allies”, and has been claiming that “the United States seeks to keep them [inside the camp] as human shields”.

In the same vein, RT echoed the words of Major General Viktor Kupchishin, the Head of the “Russian Reconciliation Centre for Syria”, who claimed that “the [alleged] growing financial dues imposed by pro-US militants on anyone who wants to leave the camp – up to $1,000 per person” were among the reasons for the decline in the number of displaced Syrians leaving the camp of Al Rukban to return to what is left of their homes.

But the demonising tone of the Russian coverage against the US about Al Rukban camp did not stop there. It reached an all-time high when Sputnik compared the camp to the Nazi German Auschwitz concentration camp. The article claimed that “according to the testimonies of the people who fled the Al Rukban camp, a great resemblance of life’s conditions can be seen with the Auschwitz concentration camp set up by Germany during the occupation of Poland, before being liberated by Soviet soldiers in 1945”.

In such a context where the vocabulary employed by Russian outlets to describe the camp of Al Rukban has evolved from “a prison that people can escape only after paying $ 1,500 to the US-backed ‘Revolutionary Commando’ factions” to the “Syrian Auschwitz“, Russia emerges as the only one seeking to end the suffering of the camp’s residents, according to the Russian media.

It is needless to elaborate indefinitely on how much such a portrait in praise of Russia does not reflect the reality on the field. Among the testimonies emerging from the field that are compelling enough to correct the portrait of Russia drawn by the Russian media is the one of the Head of a Syrian policy research group based in Amman, which gathers information from civil and military sources. He has stated that the “conditions are currently the worst in the history of the camp with the Syrian regime and its Russian ally continuing to implement a starve or surrender strategy to force the camp’s occupants to leave”.

From Syria with Love