Sputnik: Revising History One Infographic at a Time 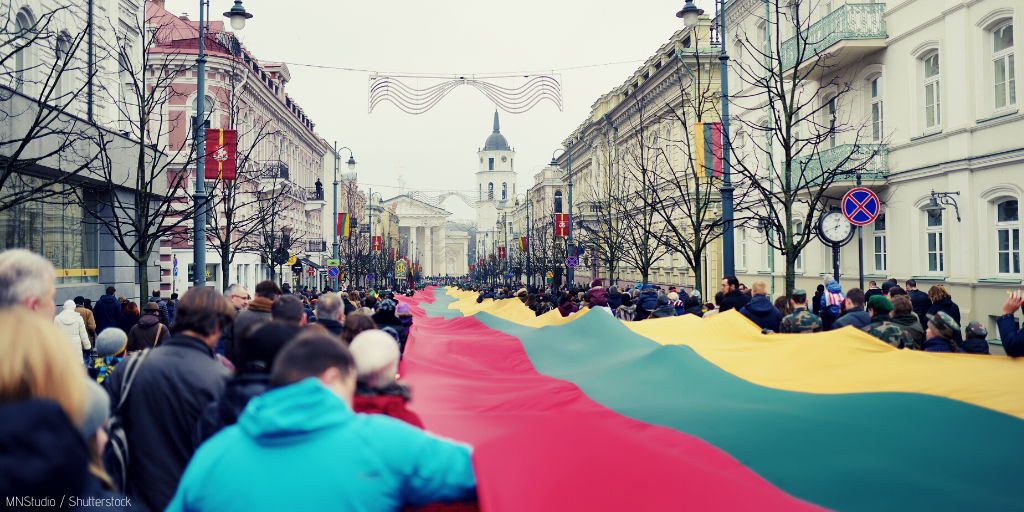 Every year on the 13th of January, Lithuania commemorates the events of 1991 when Soviet forces attempted to crush the country’s recently re-established independence. On that winter night, Soviet troops, still garrisoned in the capital city of Vilnius, attacked its radio and television centre, killing civilians who had congregated there to form a human shield. More than a dozen people lost their lives, and hundreds more were wounded.

And every January, as Lithuania marks its Freedom Defenders’ day, the pro-Kremlin disinformation machine springs into motion to distort the historical record of these events.

For the Kremlin, a lot is at stake: to concede that Soviet tanks attempted to crush Lithuania’s independence would mean to recognise its struggle for freedom and hence acknowledge the very fact that the Soviet Union occupied the Baltic States. But this acknowledgement would undermine the Kremlin’s own narrative about the Soviet Union’s unblemished role in World War II.

As a result, the annual disinformation cycle is about preserving this narrative while trying to discredit Lithuania and advance a revisionist account of historical events. These efforts include accusing Lithuania of provocations against the Soviet regime, insisting that Lithuanians killed their own people, that the actual circumstances of that night remain unknown, and that Lithuania, in its efforts to hold former Soviet soldiers and officials accountable, is turning into a totalitarian country and the North Korea of the EU.

At times, this disinformation ventures into the truly extreme. This year, RuBaltic (a website which has previously claimed that Ukraine will disintegrate by 2023), wrote a four-part “play” about the events, mocking the Lithuanian independence movement and spinning conspiracies about those who died that night.

But not all the disinformation efforts are quite so blatant. Disinformation can take a more subtle approach, twisting words and concepts, presenting unverifiable or misleading claims, bogus experts, and half-truths. It is death by a thousand cuts – the facts are not simply denied, they are muddied beyond recognition until eventually the very notion of objective truth itself disappears.

A prime example of this strategy is Sputnik Lithuania, which has presented its audience with an infographic “explaining” the January 13 events.

Here, Lithuania’s declaration of restoration of independence is called “unilateral withdrawal from the USSR”, with the suggestion that there could have been some way for a “mutually agreed withdrawal” from the Soviet Union. For the pro-Kremlin media, uttering the word “independence” would imply admitting that Lithuania and other Baltic states were forcibly deprived of it. 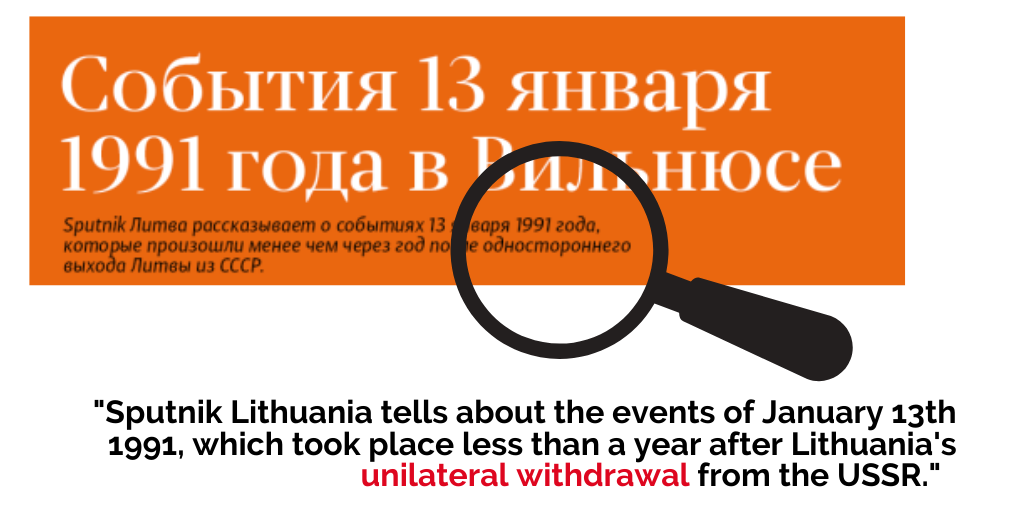 “Versions of the story”

The “Russian version” of events presented by Sputnik omits the fact that the president of the Russian Federation at the time, Boris Yeltsin, condemned the violence and called for the withdrawal of troops sent to Lithuania and other Baltic States. Despite Sputnik’s innuendos, democratic forces within Russia supported Lithuania at the time – the adversary was the Soviet Union. Russia itself struggled to leave the USSR, finally declaring independence from the Union in June 1991. Russia Day is celebrated on that day, a national holiday.

The “version” presented by Sputnik recycles Soviet disinformation. Its purpose: to create the illusion that the events of January 13 are widely disputed and the truth remains unknown. 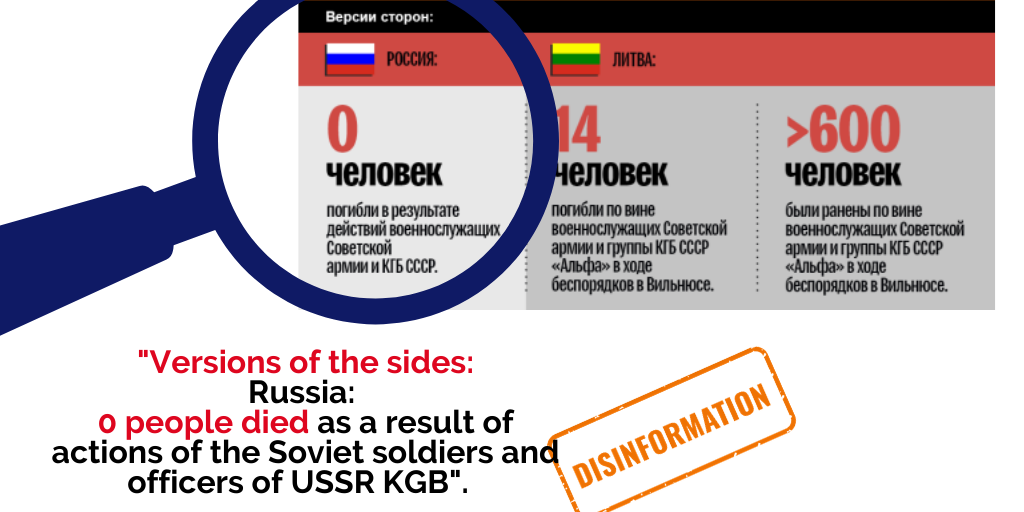 In March 2019, a Lithuanian regional court found 67 individuals guilty of war crimes and crimes against humanity for their involvement in the Soviet aggression on January 13, 1991, in Vilnius. Since Russia did not respond to the Lithuanian judiciary’s request for cooperation, most of accused were tried and sentenced in absentia.

This was the largest legal case in Lithuanian history: around 1000 people testified as witnesses. Despite the abundance of proof, the pro-Kremlin media continues to claims a lack of evidence in the case. 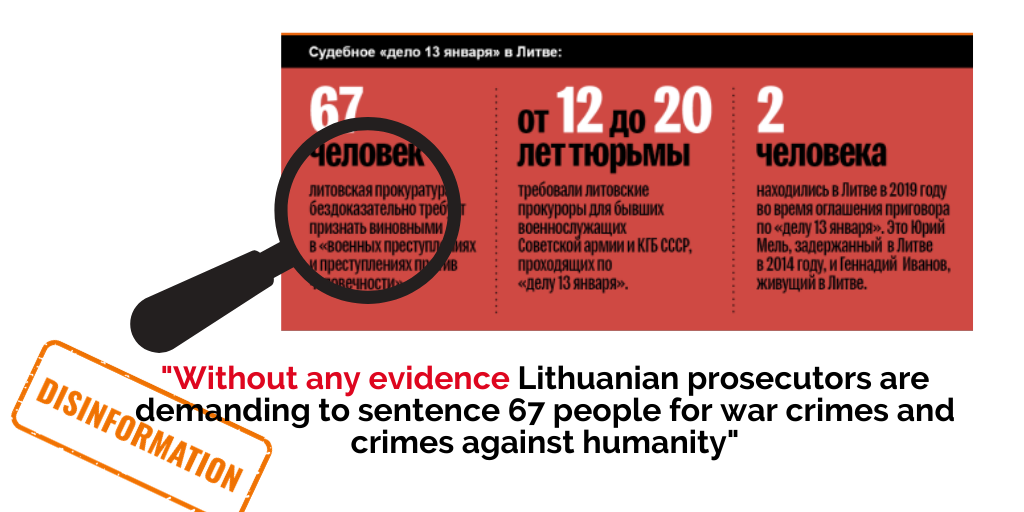 In 2018, Russia retaliated by initiating a criminal case against the Lithuanian judges, prosecutors, and investigators involved in the investigation.

The European Parliament has called on Russia to stop its illegitimate prosecution of Lithuanian judges – something that Sputnik forgets to mention in its infographic.

Under normal circumstances, infographics aim to distil complex reality in a concise and understandable manner. But in the case of Sputnik, the facts themselves get distorted along the way.