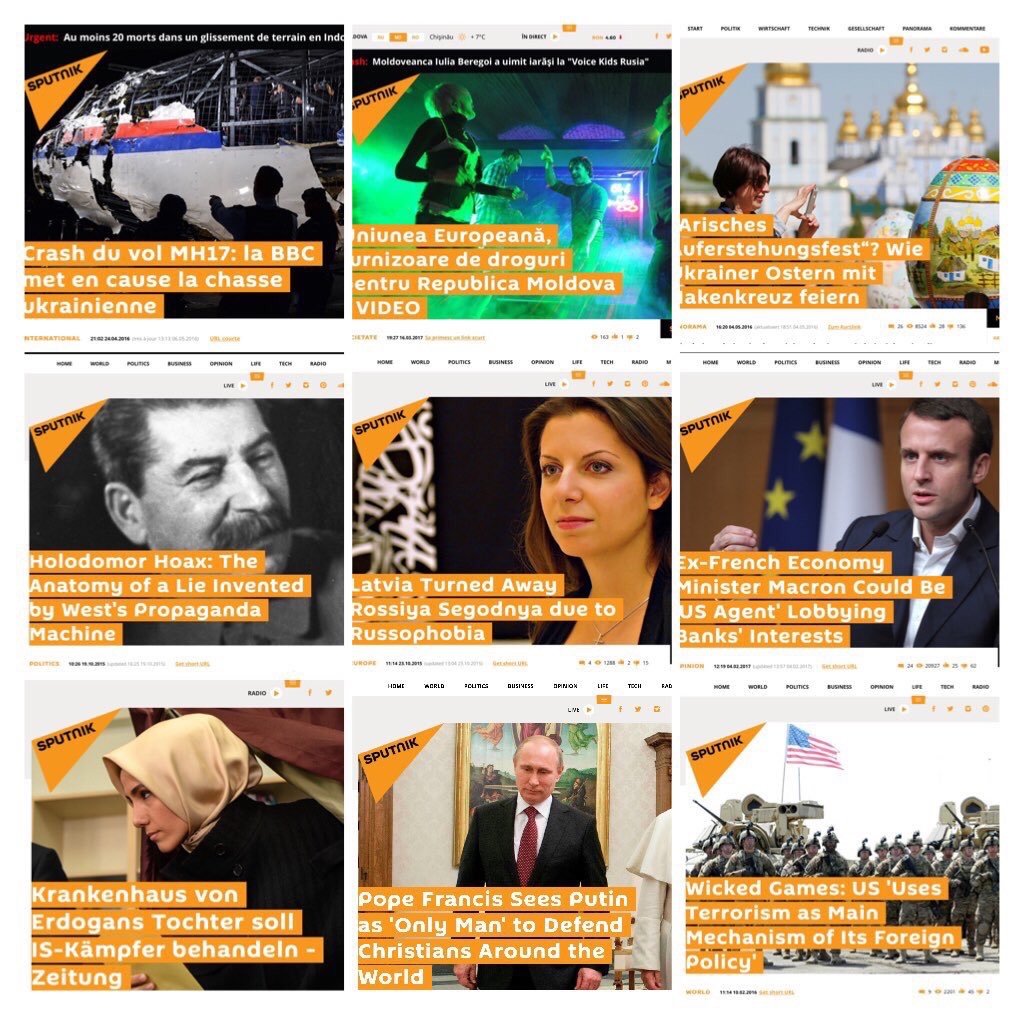 French Presidential candidate Emmanuel Macron could be a US agent, and Angela Merkel takes selfies with terrorists. Ukrainians are fascists who celebrate Easter with Swastikas, who, together with Nazi Germany, invented the Holodomor hoax, and who shot down MH17. The US is using terrorism as the main mechanism of its foreign policy, and it was probably the Brits who shot down the Russian airliner over Sinai. The EU is supplying drugs to Moldova, and it also plans to ban cash, because the EU wants to control all payments, preferably by implanting microchips under the skin of citizens. President Erdogan’s daughter cures ISIS fighters in her hospital.

Lithuanians, Latvians, the whole EU, NATO – everybody is Russophobic. But why? There is no reason to call Russia an aggressor. Even Pope Francis sees Vladimir Putin as the only man who can save Christians around the world.

Who wrote all this? NATO calls the outlet responsible a part of the Kremlin’s propaganda machine. It’s the pro-Kremlin disinformation outlet Sputnik.

It would seem sensible to presume that outlets producing this kind of reporting would not be taken very seriously by colleagues in international media and newsrooms. Especially an outlet that can also produce such outright fakes as a picture of ice hockey fans and claim they are anti-refugee protesters.

The Slovak press agency TASR (Tĺačová agentúra Slovenskej republiky – The Press Agency of Slovak Republic), founded and subsidised by the State, was initially not so discerning. On Wednesday 29 March it became known that TASR had signed a cooperation agreement with the producer of the stories outlined above. “The News Agency of the Slovak Republic cooperates with many bigger or smaller news agencies around the world. Cooperation is mostly about the exchange of content in the English language and TASR has always been interested in extending the scope of its news sources,” said the editor-in-chief of TASR about the deal (at least according to Sputnik’s reporting).

This event caused strong reactions among the Slovak public, and not only from journalists or civil society. The Minister of Culture and members of the Slovak Parliament demanded an explanation from the head of TASR.

24 hours after the news broke, TASR stepped out of the agreement. Its management said that within the one month of the validity of the cooperation agreement, TASR had not taken on a single story from Sputnik. “Thus, we have not embezzled our mission, but to remove any doubts, we are resigning from the agreement. Beginning today, the information from Sputnik agency is not among the sources considered by our reporters,” said TASR on Thursday.

The Minister of Culture has welcomed TASR’s decision.