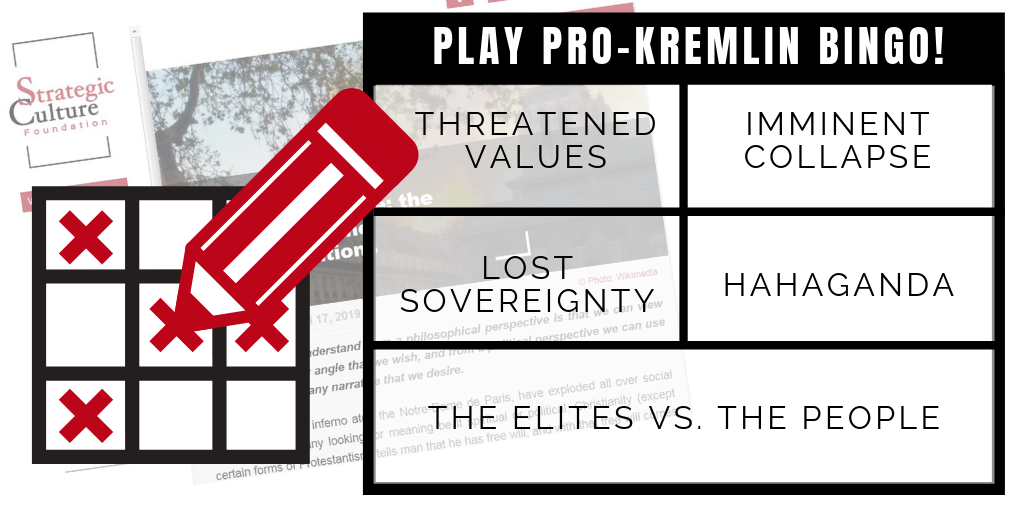 The Strategic Culture Foundation – a Russia-based think tank frequently featured in our data base – published an article on the Notre Dame fire, written by a Russian radio host, the day after the tragedy.

In itself, the article presents nothing very new or interesting. It contains the usual attempts by Russian media to establish confusion: in fact it is hard to keep track of all the strange theories suggested. It’s the immigrants! It’s the Ukrainians! It’s an act of God! But what the article does do is give us an opportunity to test out the five most common pro-Kremlin disinformation narratives used by pro-Kremlin disinformation outlets, as set out in our recent fact-sheet on this topic. And, as it turns out, the article manages to accommodate all five narratives, giving us an opportunity to play strategic baloney bingo – five in a row! So here goes:

Some online theories point to this public tragedy as a way to get French protestors to take off their yellow vests, feel both very French and very sad, to make them go home and shut up as the country and culture continue to be trampled upon by the ruling elite.

Seeing the cathedral rebuilt as a mosque would be very diverse, tolerant and sensitive and fall inline perfectly with an SJW [Social Justice Warrior] set of sensibilities.

It is unlikely that France has the ability or desire to go on a crusade abroad as a means to justify itself as something valuable, especially in its current vassal status within the framework of the EU.

It is very possible that Christianity in the West will die out within a few generations given current trends, more and more Europeans are coming to the consensus that “Only Christianity can save Europe”.

The EU elite’s stern consensus that Cultural Masochism is the greatest joy in life.

OK, this last example wasn’t really that ha-ha, but it is still an attempt to ridicule EU policies, instead of arguing for an alternative.

Even though the author wisely warns against entering into False Flag speculations, these kinds of claims – another disinformation favourite – have already appeared. The Strategic Culture Foundation itself hints in an unsigned editorial that even if the direct cause of the fire was some technical mishap, it’s really French President Macron’s fault:

Macron’s policies of gutting public investment while boosting the wealth of billionaires and splurging €50 billion a year on militarism have manifested in the desecration of the country’s national treasure at Notre-Dame.
The person and people to blame for this obscenity is President Macron and his pro-rich policies leaving the nation in neglect and deprivation

In fact, the Strategic Culture Foundation likes False Flag Stuff A LOT: MH17 was a False Flag Operation, as was the Skripal Case.

This entire text demonstrates how handy narratives are to help disinformation outlets form a message. Take a random claim, shape it to fit a well-working narrative and you’re home. Blame it on the Pope, the migrants, the EU, the leftists or just anyone. Why wait for facts?