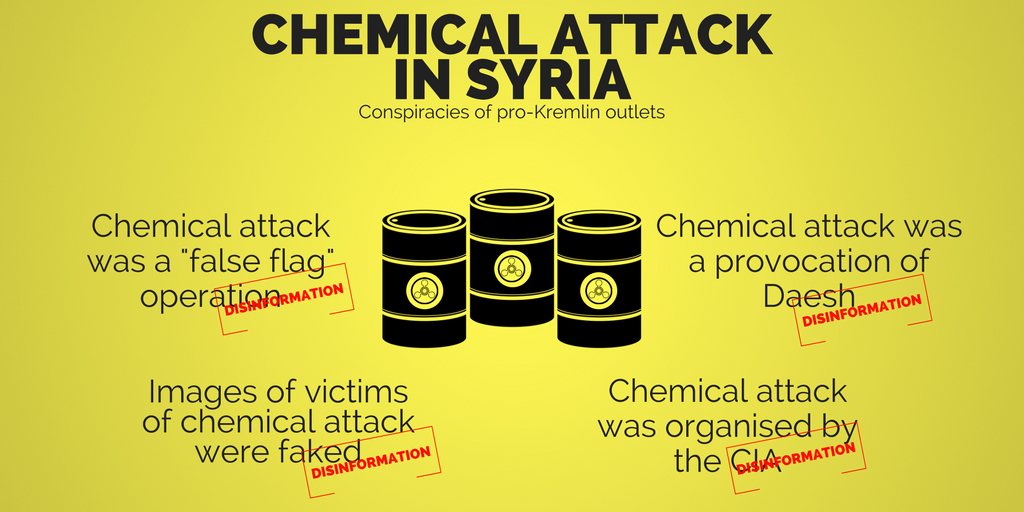 The chemical weapons attack in Khan Sheikhoun saw pro-Kremlin outlets employ the same disinformation techniques that they have used in past tragedies such as the shooting down of MH17, or after the murder of Boris Nemtsov and the attack on the humanitarian convoy in Aleppo.

First, we see the spreading of several, often contradictory versions of events, in order to sow confusion and distrust. Thus for example the Russian Ministry of Defence stated that the attack happened five hours later than it had actually occurred; and claimed that the Syrian army had hit stockpiles of terrorists’ chemical weapons. Many official representatives of Russia then repeated this claim, as did many pro-Kremlin outlets in various languages (see e.g. a Slovakian version).

It is a claim widely dismissed by multiple experts, diplomats and witnesses on the ground, since: a) rebels could not have produced or obtained such a high amount of sarin as was needed for an attack of this magnitude; and b) an airstrike on a depot would have destroyed the sarin immediately. See e.g. an explanation in The Guardian or BBC. Moreover, according to CNN the US military and intelligence intercepted communications of Syrian military talking about preparations for the sarin attack.

Nevertheless, these theories were regularly repeated in the course of the last two weeks, see e.g. the major Russian “news” show Vesti nedeli or the Czech Protiproud.

… and then spread conspiracies

Other pro-Kremlin outlets leaning more towards conspiracies started spreading another version: that the whole attack was a “false-flag” operation. Among the first was the American outlet Infowars, quickly followed by GlobalResearch, and translated into other languages (e.g. Czech). See a related story about who brought the #SyriaHoax hashtag to America by DFRLab.

Vremya Pokazhet, one of the major Russian TV debate shows, even claimed, during a single broadcast, that the attack was a provocation by Daesh; then that the images of victims had been faked; and finally, that the attack had been organised by the CIA and the Pentagon. The Slovak pro-Kremlin outlet, hlavnespravy.sk also offered multiple and contradictory explanations: that the gas came from the rebels’ depots; that the attack was committed by terrorists; and that it was a false flag operation by the White Helmets.

Despite the fact that these conspiracies were also quickly debunked, they were further multiplied and repeated even e.g. by the Russian Minister of Foreign Affairs, among others.
One more familiar technique was also used: that of deflecting attention by accusing someone else of a similar crime elsewhere. Thus the official channel of the Russian Ministry of Defence, TV Zvezda, was quick to accuse Ukraine of using chemical weapons. Of course, no evidence was provided.

Diagram by DFRLab of how the “false flag” claim spread after the chemical attack.

Demonstrations are fake and demonstrators are terrorists

As usual, demonstrations against the interests of the Kremlin were presented as events orchestrated by the West in pro-Kremlin outlets. Based on the disinformation in one pro-Kremlin outlet that “US and European allies invaded Ukraine with 10,000 NATO soldiers”, the conclusion was drawn that the recent protests in Belarus were organised by Western powers in order to “do the same with Belarus” here and here . Of course, there was no mention of the fact that NATO engagement in Ukraine simply does not entail 10,000 soldiers. NATO has, however, provided support for capability development and capacity building in Ukraine in response to the Russia-Ukraine conflict. Also the British ambassador to Belarus, in cooperation with the US and EU, was accused of being behind the protests in the country, again with no evidence provided for the claims.

Furthermore, the peaceful protests against corruption in Russia were portrayed by Russian state TV to be linked to the terror attack in the St Petersburg metro, as two steps of the same plan to attack the next presidential election in Russia. The West was directly blamed for the terror attack in St Petersburg. As we have recently pointed out, pro-Kremlin outlets used similar “Fog of Falsehoods” also after a majority of the terror attacks in Europe, variously accusing the Western countries or NGOs of being behind them, claiming them to be “false-flag” operations, or simply denying that such events even took place.